Rockit apples set to blast off

A brand new apple cultivar developed in New Zealand is introduced to the market in an equally novel packaging format. And now a Shuttle Pack has been launched in addition to the tube. 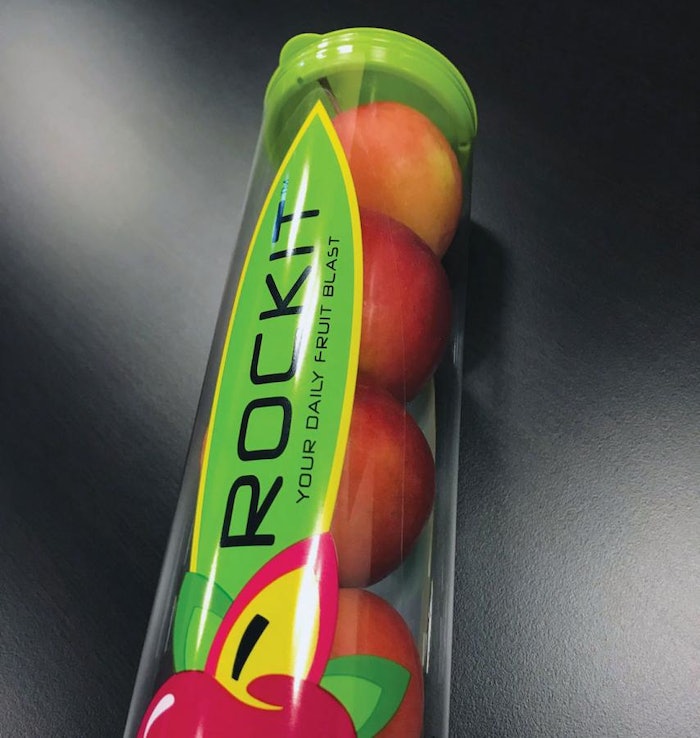 This new apple cultivar reached store shelves in a PET package format quite unusual for the category.

“Washed and packed into recyclable tubes, it’s a safe, healthy snack, ready to eat straight from the tube and perfect for all ages—in the car, at sport, at your desk, or at school.”

That’s how Rockit Global Ltd’s website describes its Rockit apples, an entirely new apple cultivar developed and patented by Rockit in New Zealand. It first became commercially available in 2011. Slightly larger than a golf ball, the Rockit apple is not positioned as a competitor to other apple varieties. Rather, because of its snack-size dimensions and its remarkably sweet taste, it’s sold as a more healthful and incredibly convenient snack compared to the processed foods that dominate the snack category today.

What makes Rockit such a fascinating story from a packaging perspective is that right from the get-go this brand new apple went to market in an equally novel package: an injection stretch blow molded PET tube made by Visy with a snap-fit injection-molded PP lid. Graphics, which are beautifully executed in the way they reinforce the “rocket/Rockit” theme of “Your daily fruit blast,” are pressure-sensitive labels. Notable on the back label is this acknowledgement of the role played by this particular packaging format: “Rockit is conveniently packaged in a recyclable tube that fits in a school bag, car cup holder, baby buggy cup holder or on your desk to enjoy!”

While Rockit apples were developed in New Zealand — no, they’re not genetically modified, and yes, they’re really tasty — only 3 percent of production is sold in New Zealand today. The cultivar is grown in seven countries and sold in 22.

Rockit entered the U.S. market by way of Borton Fruit, a 114-year-old family-owned grower in Yakima, Washington. Late in 2017 Borton became a part of Chelan Fresh, which is a 300-member grower-owned fruit cooperative. Borton and Chelan Fresh hold the exclusive licensing to grow, market and distribute the Rockit apple in the United States. The first appearance of the apple in the United States was in 2015, when Borton imported the fruit from New Zealand growers. Also shipped to Borton from New Zealand were the pre-labeled PET tubes and PP lids. Borton put fruit into tubes more or less by hand. (For a video of Rockit apples being packaged in New Zealand, go to https://vimeo.com/165387191.)

Washington grown
The year 2016 marked the first time that Borton-grown Rockit apples from the state of Washington were packaged and sent to market. These apples were harvested from trees planted in Washington in 2012. “In the state of Washington it takes five to seven years from planting a tree to harvesting saleable apples,” says Borton Marketer Sky Johnson. “The Borton family has procured and planted hundreds of acres of this new variety, which has required substantial investment and risk to establish Rockit orchards across Eastern Washington.”

Johnson readily acknowledges that sourcing the PET tubes from Visy in New Zealand is less than optimal, though it made perfect sense as a way of first getting launched. “In the next few seasons we’ll have these packaging solutions optimized as local suppliers are identified,” says Johnson. Also in development is a plan whereby the U.S. market would receive Washington-grown apples for six months of the year and New Zealand-grown apples the other six months.

The lid on the package is worth a closer look for three reasons. First, its underside is attractively decorated with an embossed apple, the Rockit branding, and the company Web address. Second, the lid is currently undergoing some modification as consumers have indicated that it’s rather difficult to pry off. Johnson says this is being addressed by adding a pull tab feature to the lid. It’s also worth pointing out that the lid has three holes in it that are critical because they allow the living produce to respire. “Apples produce a lot of ethylene, so ventilation can be a challenge,” says Johnson.

Johnson adds that, for reasons not entirely understood at this point, the Rockit cultivar holds up remarkably well compared to most other apples available today. “A Rockit picked in March down in New Zealand and kept in regular cold storage, not in controlled atmosphere storage like we use for the other 36 million bushels of apples that come out of the state of Washington, is in perfectly good condition when it reaches a U.S. supermarket in November.”

Future growth
Now that the apples are being produced domestically and volumes are increasing, a key to further growth is some way of automating the task of putting the apples into the tubes. “Today it’s essentially a process of placing guides that align the apples and then you slide the tube over the top and put the apples into the tube,” says Johnson. “But there is definitely room for improvement. The size of the apple itself and the cylindrical nature of the container into which it’s going presents more than its share of challenges.” Johnson says that Rockit Global Ltd. in New Zealand has spent considerable time and effort with Bosch Packaging Technology to come up with something that would automate the packaging process. “It’s a learning curve,” he adds. “We like to joke about the fact that developing an automated packaging system is, as a matter of fact, ‘Rockit’ science.”

Borton clearly sees great potential for Rockit, because it has already developed a second packaging format, one that holds 3 lb of product. In keeping with the space exploration theme, the package is called the Shuttle Pack. It’s extrusion blow molded of PVC by Priority Plastics. “We blow it with a dome on top and then cut off the dome,” says Priority Plastics’ VP of Sales Robert Lock. Priority is also responsible for application of a pressure-sensitive label to the front and lid, a task that it currently outsources. Six of these Shuttle Packs are placed in a corrugated shipper whose graphics nicely complement the rocket-themed graphics on the primary package. Fruit Packers Supply provides the single-wall corrugated Euro Footprint shippers. Each shipper has four male tabs along the top walls that match four slots in the shipper above it so that aisle-end displays can be set up in the supermarket.

As Washington-grown Rockit apples move into its third year of in-store and online availability, Borton Fruit will be looking at ways to optimize just how it sources its packaging materials. Regardless of how it all shakes out, this new-cultivar-in-a-new-pack-format story should be an interesting one to watch.