In a social media campaign targeting TikTok, Instagram, and Facebook influencers who are pushing the tongue-in-cheek #ThePerfectMimosa trend, Tropicana scored big-time buzz for both its brand and its consumers, with help from pack design agency Fuseneo.

In 99 out of 100 cases, packaging’s primary deliverable to a big brand is to safely transport a product through the supply chain—intact and without spoilage—to a consumer. That’s not to diminish packaging’s secondary jobs, like conveying product information or engaging consumers while on the shelf. But at its core, packaging is a practical endeavor.

But occasionally, packaging vaults into the limelight by playing a starring role in splashier CPG goals, like buzz marketing. Such was the case with a November 2022 Tropicana (Tropicana Brands Group) campaign that seized on a recent TikTok, Twitter, and Instagram trend led by influencers in the mixology space, among both professional bartenders and their brunching in-home weekend warrior counterparts. In this trend, mimosas, which traditionally are half Champagne, half orange juice, are made using diminishingly small amounts of orange juice, or “just a hint of OJ” as one influencer in the hash-tagged #ThePerfectMimosa Twitter feed said. The tongue-in-cheek joke at work behind the scenes is for the mixologist, with a wink and a nod, to be heavy on the boozy portion of beverage, and light on the non-alcoholic portion.

Instead of a ham-fisted pour of OJ into the Champagne-filled flute, these social media influencers apply the OJ in just a few drops or a mist. To achieve this effect, home mixologists and influencers use their own bottles to “apply” the OJ—some with spray closures, others with liquid droppers, likely repurposed from other standard CPG product packages, like body mist spray bottles or cosmetics droppers.

But the trend gave the notably creative Tropicana team, who isn’t new to buzz-worthy campaigns, some big ideas.

“Tropicana introduced the Tropicana Mimosa Maker to celebrate the beloved brunch beverage and offer mimosa lovers a fresh, first-of-its-kind way to enjoy their perfect mimosa at their next gathering,” a Tropicana spokesperson tells Packaging World. “Mimosas are undoubtedly a brunch classic. As long as brunch lovers have enjoyed the adult beverage, they’ve had an opinion about the ‘perfect’ OJ-to-bubbly ratio. In fact, in the last year alone, more than 1.6 million videos were created sharing #ThePerfectMimosa. As an iconic breakfast brand that celebrates the brightness that even a single sip of orange juice brings, Tropicana recognizes there may never be a one-size-fits-all approach to the perfect mimosa. What they do know for sure is that the perfect mimosa includes Tropicana orange juice.”

The company turned to packaging design, prototyping, and testing agency Fuseneo to create a spray closure with a trigger that would be compatible with Tropicana’s existing 12-oz bottle and threaded screw cap. Notably, the project wasn’t designed to roll out to market at scale. Instead, a small scale run of trigger sprayers were sent, in kit form, to social media influencers. Each Tropicana Mimosa Maker kit includes a 12-oz bottle of Tropicana Pure Premium Original orange juice, two Champagne flutes, two iconic Tropicana red and white striped straws, and a Tropicana Mimosa Maker screw top that was developed through the company’s partnership with Fuseneo.

“There's been a trend amongst brands to create buzz-worthy social experiments and get content to be promoted influencers, creating this kind of natural, organic public discussion,” Fuseneo’s Brent Lindberg says. “The Tropicana team has done some other cool social campaigns in the past, with OJ-flavored toothpaste and OJ-flavored cereal [meant to obviate the famously clashing flavors of mint toothpaste with OJ, or cereal milk with OJ]. They weren’t ever meant to scale, but these are projects that have been fun to watch. It creates something memorable for consumers and for the brand. Tropicana wanted to leverage this #ThePerfectMimosa, but how would they do it? How would they enable consumers to have this kind of fun experience? That's what really set up this project for us. When they came to us, we asked ourselves, ‘how can we create a controlled dose closure that allows consumers to spritz just a little bit, just a hint of OJ, or a dash of it, or just take the closure off and pour it in, if that’s what the consumer really wants?' That variable experience, allowing consumers to dial-in their Mimosa, was really the driver behind the project.”

Function was one important element, but so were elements like look, color, and brand mark.

“We wanted to ensure the design of the Tropicana Mimosa Maker was uniquely ownable to Tropicana, so we pulled inspiration from Tropicana’s branding and colors, and included nods to the brand’s iconic red and white striped straw and signature offering – OJ,” the Tropicana spokesperson says. “Through partnership with Fuseneo, the result was a fun, brand-forward accessory intended to bring brightness to brunch responsibly.”

Designing for small- to mid-scale projects

Fuseneo has a long-standing relationship with the the Tropicana teams, having worked closely together to design to the original Tropicana Pure Premium Original OJ bottle structures that are that are in-market today. The companies worked on all three different sizes, including family sized 89-oz bottle, the mid-size 52-oz bottle, and the 12-ounce, single-serve size that reappears in this mimosa project. The two teams’ familiarity on the bottle dimensions made Fuseneo a natural choice, but still, the project wasn’t without challenges.

First, the timeline was tight. One never knows when the fleeting gestalt of a hash-tagged social media trend will dry up (or “jump the shark,” as the kids say). So Tropicana and Fuseneo had to strike while the iron was hot.

“And then you've got food contact, that’s a complicating factor. And you've got a lot of a lot of different elements involved with variable dosing,” Lindberg says. “Even though the scale was small, we were setting  out to create a whole production tool, and production molds around triggers, and they’re very complicated. The, the initial stage of the project was really about finding out what was the right way to allow consumers to dial-in and dose for themselves, to create that variable experience.

“We explored everything from droppers to puffers to triggers to see what would best give consumers this kind of an experience. Triggers and sprayers were really the impetus from the beginning, but we had to try and figure out if we were even going to consider them. How do you create a new trigger within these kinds of timelines and project constraints? But it made too much sense, so that was the chosen direction. After a couple rounds of iteration and concepting, we locked-in on this on this direction, where we would be able to source an in-market, food-safe trigger that was certified for food contact and would allow consumers to adjust the experience as they wanted. Taking off the existing external housing of this in-market trigger and sprayer, we were then creating new housing components—kind of snap-on style pieces. Those pieces don't have any food-contact surfaces themselves. We ultimately applied that trigger and housing to the existing Tropicana Pure Premium threaded closure, to act as its base. So it works with any off-the-shelf 12-oz Tropicana bottle, with the in-market closure that’s already on the bottle today, since that closure is actually the base of our trigger closure.”

Fuseneo sourced the existing food-contact trigger apparatus through a broker, but the supplier wasn’t specified. As Lindberg and his team went through this process of ideation, considerations on how to form and assemble the trigger spray closures were top of mind. The design agency had to weigh numerous different potential processes to first see what would work, then see what would work well and work quickly.

At first, everything was designed and prototyped via 3D printing process, as stands to reason. If they only needed a handful of spray triggers for show and not function, then 3D printing, plus spot painting, would have been the chosen method. And of course, had they needed millions of triggers for a full-scale product rollout, then cutting a steel mold for injection molding would have been the preferred method. But the scale was somewhere in between, in the hundreds, with the need for real, functional triggers that could be used at home or in commercial settings, like bars.

"The process that we wound up using to create the real, branded trigger closures was casting, using urethanes and silicone molds," Lindberg says. "That's the that's the process that we landed on because it's one we use when we only need a limited number of pieces, we need them very quickly, we need them to have high detail, we need them to be a solid color. Also, we didn't want to deal with painting these parts because we were worried about scuffing or paint coming off in a commercial bar setting. Making them out of a solid material that was a consistent color was really a driver for going this direction. And then, lower-cost tooling and parts was another reason. Rather than cutting steel and injecting plastic, you can get those plastic properties and everything from two-part urethanes using silicone tools. Casting can serve this middle space, where we're looking to create a medium number of prototypes that have similar properties to production parts."

So how did the campaign turn out? How did consumers and influencers react?

"People are excited about getting their hands on the Tropicana Mimosa Maker, as seen on Tropicana's Instagram, with comments like, 'Very very smart move! Way to read the room [orange emoticon],' and media have been loving it, too. Mario Lopez is a fan, calling the Tropicana Mimosa Maker 'awesome' in an Access Hollywood segment and it seemed to help change the mind of one Barstool Sports editor who shared, 'I'm not a mimosa person per se [...] but now that I can choose how much OJ to put in there it flips my mind a bit,'" the Tropicana spokesperson told PW.

It sounds like a success—and orange you glad that packaging gets to play this kind of starring role for creative CPG buzz campaigns? PW 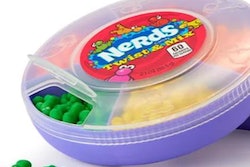 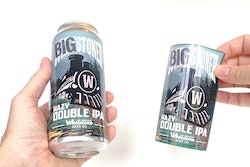 Amid Beer Sticker Craze, Can Labels Become the Sticker