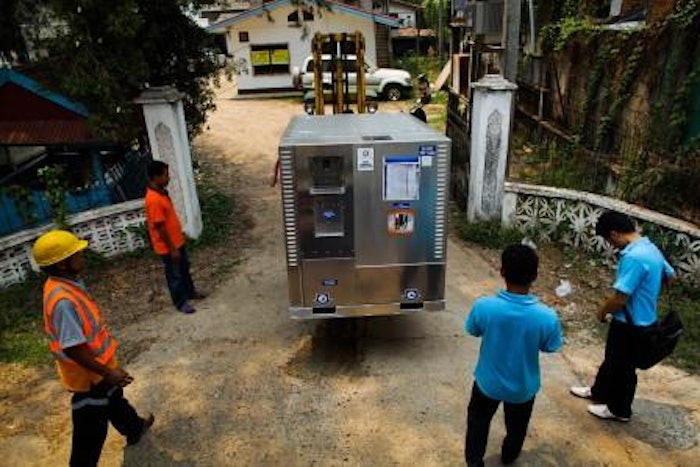 A flu vaccine shipment in a temperature-controlled container is moved by a team in Laos.

The Centers for Disease Control and Prevention coordinated a coalition of partners including UPS to transport nearly 100,000 prefilled syringes of flu vaccines to Laos that were administered in May, just in time for Southeast Asia's flu season.

This marks the second year of UPS’s involvement with the CDC to deliver vital flu vaccinations to those in need. In 2012, UPS transported 375,000 flu vaccines to Laos, which administered 90% of the vaccine among four provinces in Laos in just two weeks. Today, the vaccines are being administered to pregnant women and other adults with higher risk of serious flu-related health threats in Laos.

This year’s vaccine delivery involved bioCSL, an Australian firm that manufactures, in-licenses, markets, and distributes vaccines. The company’s Web site says it focuses on vaccines for the prevention and treatment of serious disease. “We operate one of the world’s largest influenza vaccine manufacturing facilities and supply seasonal influenza vaccines to Australia and global markets,” it reads.

Along with UPS and bioCSL, the U.S. Dept. of Defense and Becton, Dickinson and Company also served as donors in this project.

Dirk Van Peteghem, vice president, Healthcare Logistics, UPS, explains, "This particular healthcare logistics feat stretched over 5,000 miles, and two continents, and was completed in just three days. A particular challenge in this case was that Laos is very remote, which added an additional layer of complexity to the shipment. In addition, the shipment had to maintain a temperature range of 3° to 7° C for the entire journey, which included air and ground transportation. This accomplishment is a testament to the effectiveness of our temperature-sensitive capabilities and global network.

"The UPS Temperature True™ air freight service utilized our network of global control towers and provided 24/7 temperature monitoring and notifications to protect the vaccines against temperature excursions while in-transit,” says Van Peteghem. “The PharmaPort 360™ is the validated container that we used to maintain a temperature range of 3° to 7° C. They are especially important in multi-stop, cross-continent moves like this one."

Last year’s delivery involved the use of two PharmaPort 360™ containers to deliver 375,000 doses of seasonal influenza vaccine to Laos. Although fewer total doses were sent in May’s delivery to Laos, eight PharmaPort containers were used to ship the vaccines, whose single doses were in larger prefilled syringes. This year’s journey took three days and included transportation by truck from Parkville, Australia, to Melbourne, Australia, by air from Melbourne, Australia to Bangkok, Thailand, and then by truck to Vientiane, Laos. Watch the video, "Temperature-sensitive vaccine travels from Australia to Laos."

Dr. Joseph Bresee, chief of the Epidemiology and Prevention Branch in the CDC's Influenza Division says, “Last year’s success was an example of what public-private partnerships can accomplish. This year, this partnership has been able to expand further with new donors and new partner countries. Because of this, people at risk for severe influenza will be protected for the first time.”

In addition to the shipment to Laos, UPS also helped deliver an additional 5,000 doses of the flu vaccine in prefilled syringes to Uganda. This was a donation of excess vaccine from the U.S. Air Force and the U.S. Department of Defense in Kadena, Japan. Also facilitated by the CDC, the coalition provided valuable guidance to Uganda in establishing a future influenza vaccination program.

"UPS is a proud partner in this important effort, which allows countries like Laos to gain valuable experience in coordinating and executing a seasonal influenza vaccination program," Van Peteghem tells Healthcare Packaging. "This is the second year that UPS has partnered to ensure flu vaccinations safely and quickly make their way to Laos. Last year, over just two weeks, Laos administered 90 percent of the flu vaccine to target populations across four provinces. That’s a great accomplishment. We look forward to working with them in coming years and helping with these important causes."

A recent federal court decision gave a big boost to the FDA’s Generally Recognized As Safe (GRAS) rules. As with last month’s column, this one will examine this single case for its unique lessons.
Eric Greenberg
Oct 25th, 2021
More in Package Design