The Flexo Tech High Performance Label, which won the Gold, was the students’ final class project. It consisted of a four-color process, two spots, a flood varnish and extremely tight register. 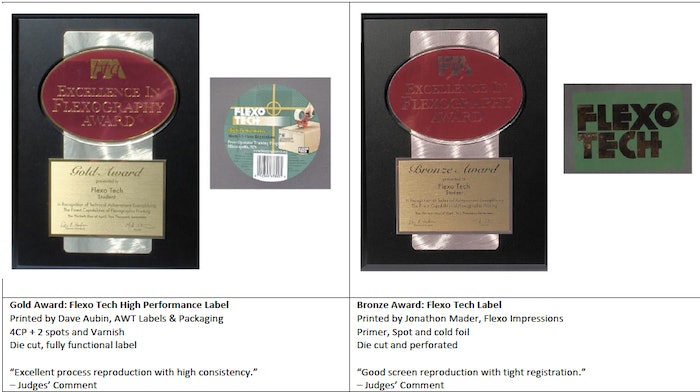 The Flexo Tech High Performance Label, which won the Gold, was the students’ final class project. It consisted of a four-color process, two spots, a flood varnish and extremely tight register. In order to get full points on the final, the “job” needed to be set up in under 900 ft. and less than two hours.

The Flexo Tech Label that won the Bronze is cold foil text over a spot color, die-cut and perforated. Cold foil is taught in the hands on Flexo Tech 12-week Press Operator class.

Institute, and several other long-standing, renowned flexographic training programs. Winners were announced during the Flexographic Trade Association’s 2017 Excellence in Flexography Awards Banquet on Sunday, April 30 in Phoenix, AZ. In attendance and accepting the award on behalf of Flexographic Tech, was instructor Shawn Oetjen.

Flexographic Tech’s role in training press operators is vital to the future success of the flexographic printing markets. The demand for the trained operators increases daily, as more people retire and fewer people enter the industry.

“11 percent of the current workforce is under the age of 25. This indicates a major influx of employees needed to fill the job openings of those that are retiring. That, coupled with a US packaging market forecast of 3.9 percent annual growth for flexographic printed goods, illustrates the increased need for trained press operators,” Oetjen says.

According to JP Morgan Chase, there are currently 5.6 million unfilled jobs in America and that number is predicted to skyrocket to a staggering 16 million in 2024.

Beer giant kicks off the summer season with three limited-edition can designs that celebrate American freedom, with a portion of sales being donated to non-profit Folds of Honor.
Anne Marie Mohan
Jun 2nd, 2021
More in Materials & containers