New technology captures emissions from diesel generators to create carbon black for ink, which Dell India is using to print 125,000 cases per month.

First it was packaging made from bamboo, then mushrooms, then air, and then ocean-bound plastics. Dell Technologies’ latest—and no less intriguing—pioneering packaging effort is the use of ink made from smog by startup Chakr Innovation.

Dell “discovered” Chakr during its 2018 Innovation Olympics competition. Explains Oliver Campbell, Dell Technologies Director of Worldwide Procurement & Packaging, Dell is constantly on the lookout for small companies with innovative new sustainable packaging technologies that it can nurture and support through its supply chain expertise.

“This is where our experience at Dell makes a big difference,” says Campbell. “We have a global footprint in the technology industry. We can help startup companies scale and make their own processes more efficient. And if they get to that point, we will buy from them. We find that if Dell moves to a technology, a large number of companies follow.”

Chakr was founded by three engineers in India, home to 10 of the top 20 most polluted cities in the world. In fact, in November 2017, it was reported that Delhi’s air quality was so bad, just breathing it was similar to smoking 50 cigarettes a day. The main contributor to the pollution problem there is the diesel generators used for power backup for things such as air conditioners. Chakr’s technology, Chakr Shield™, is a retrofit emission control device for diesel generators that can capture around 90% of particulate matter emissions from the exhaust of these generators. Not only does the “shield” clean the air, but also the soot collected is then used by Chakr to create carbon black used to make ink.

“What Chakr does is capture microparticulates, which cause things like cancer, emphysema, and birth defects,” Campbell says. “To be able to monetize this pollution is really something.”

Dell India began using this Pollution Ink, or POINK, in December 2017 to offset-print on 125,000 shipping cases per month. “That’s a big deal because the amount of air that’s cleaned is substantial,” says Campbell. “This translates the amount of air breathed annually by about 110,000 people.”

One of the initial questions by printers in India was whether the ink would perform on-press the same as traditional inks. “But the process was seamless,” says Campbell. And, the cost of the ink is on par or close to that of traditional inks as well.

“When we first looked at the technology, we asked ourselves, if we have the ability to clean the air, and we break even doing it, why wouldn’t we,” says Campbell. “There’s too much of a supply of polluted air. We’d like to use this ink everywhere; that’s what we’re working on.”

Nestlé Waters Pure Life bottle awarded for use of 100% rPET 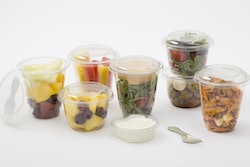 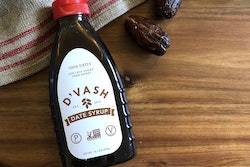 Date nectar and syrup now in travel-size and squeezable bottles