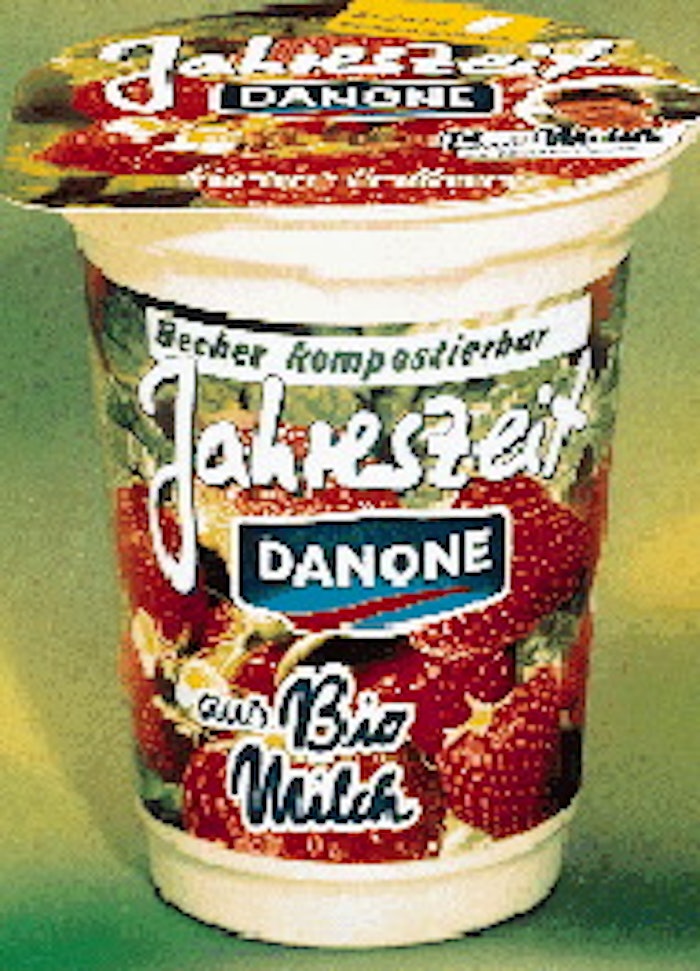 According to Danone general director Bernhard Hours, the Eco Cup decomposes under commercial composting conditions to humus, water and carbon dioxide within approximately 60 days. Yet during its useful life the cup performs like conventional polypropylene or polystyrene. Residential composting is not encouraged because typical temperatures aren't high enough for swift decomposing. The company suggests consumers put the empty yogurt cups in the same yellow recycling bag or bin as all other plastics. (Germany, remember, is the land of Duales System Deutschland, so the collection of recyclables is highly developed.) W.U.R.M. GmbH is the company responsible for sorting the cups and sending them to its own commercial composting plants. According to W.U.R.M.'s Dr. Irmgard Hoverath, employees are being trained "to recognize the Danone cups by the writing and colors that are different from nonbiodegradable cups." Cargill Dow Polymers LLC (Minneapolis, MN) supplies the PLA. Despite Cargill's strong position in corn, the EcoPLA® 2000D resin for this cup is derived from sugar beets grown in Spain. Danone's Rainer Schlicht, European packaging development manager, says corn is likely to incorporate genetically modified organisms (GMOs). The German public avoids anything involving genetic engineering. Sugar in the GMO-free beets is fermented to produce lactic acid that is shipped to Cargill Dow's plant, where PLA resin is made via solvent-free polymerization. Danone isn't saying who the cup thermoformer is. Currently the well-traveled PLA resin costs Danone three times as much as PS or PP typically used for yogurt cups. "We are prepared to pay a large price ourselves to bring this innovative development into the market," says Hours. Danone naturally hopes that other applications of PLA will materialize to help drive resin cost down. For one year, however, Danone has an exclusive on the technology within the dairy industry. Adds Hours, "We intend to move other products over to the new packaging concept from the end of 1998 onwards."