Munsterland of Essen, Germany, announced on May 13 at interpack 96 that it was launching two premium margarine-like spreads, MM Extra and MM Super, in the Tetra Box from Filltech (Helsingborg, Sweden). 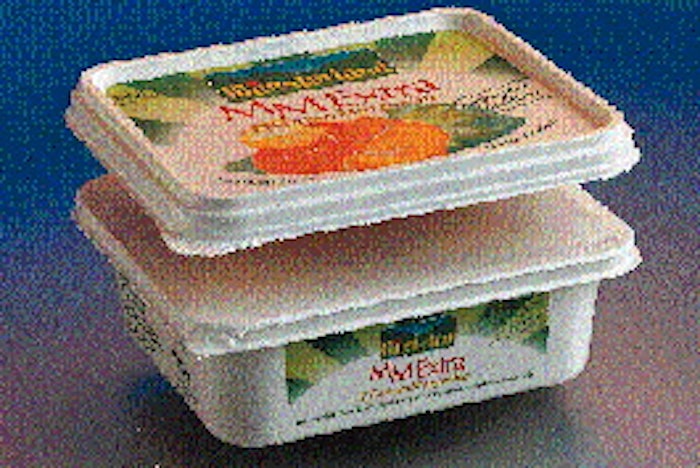 Made of a filled polypropylene called TPR, Tetra Box has found commercial applications in Sweden since 1992, but this represents the first use in Germany. The chief advantage of TPR is what Filltech calls its "favorable environmental profile" compared to "corresponding competitive packaging." That is, because it substitutes natural minerals for some polymer, it requires less energy to produce, says Filltech. If incinerated, it emits only carbon dioxide and water vapor. Finally, says Filltech, "pilot recycling studies show promising results." Filltech also describes its moisture and oxygen barriers as more effective than PP, polyethylene or polystyrene. In addition to the thermoformed tub and snap-on lid, the Munsterland packages have a flexible inner seal also made of TPR. All three components have bright graphics printed offset in six colors by Filltech. Munsterland admits the Tetra Box costs about 20% more than a conventional PP or PE tub, but the company is willing to pay the upcharge for a package whose "green" benefits are so appealing. The 500-g (17.65 oz) tubs sell for about 2 DM ($1.35).