A retrospective and a look ahead on a venerable package, as imagined from the source.

When John R. Van Wormer was granted US Patent 1157462 A in 1915, its title was Folded-blank box. That it became known as the gabletop carton was predictable, given its unmistakable resemblance to the gable portion of a pitched roof.

Unless we’re talking about something as timeless as a mountain range, reaching the one-hundred-year mark is a milestone, and anything or anyone achieving such a milestone is held in reverence. It is human nature for that reverence to be tinged with envy, as in “I wish I could say I’ve been around that long.” We also find ourselves wanting to study the centenarian—animate or inanimate—for lessons to be learned.

Packaging long has been ascribed human attributes: "silent salesman" and "communicator" being examples. Taking it to the anthropomorphic extreme, if I were to interview the gabletop carton, it might go as follows:

SA: Should I refer to you by your trademarked name of Pure-Pak?

G: Or you can call me Gabletop, or simply, Gabe, for short.

SA: I thank you for agreeing to this interview.

G: I’m flattered by your interest. Maybe I can say something that will inspire young packages, such as the stand-up pouch.

SA: At the time you got patented, did you ever envision a 100th anniversary?

G: No, and probably neither did John, may he rest in peace. Back then, the glass bottle ruled the dairy industry, both in terms of retail and home delivery.

SA: What was your biggest hurdle, initially?

G: Besides being made of paperboard, which wasn’t a material typically associated with liquid packaging, I’d say it was the machinery that formed my blanks into cartons and then filled and sealed them. The first commercial installation was almost 20 years after the issuance of the patent.

SA: What was your strategy in competing against the glass bottle?

G: Glass has disadvantages meaningful to the consumer. It’s breakable and heavy. I’m neither. Not being breakable is a safety advantage and not being heavy saves transportation costs. By the way, my competitive strategy was adopted decades later by plastic packaging.

SA: Were fragility and weight your only advantages over glass?

G: Hardly. My panels can be printed for billboard effect. And from the beginning, I’ve had the glass bottle beat for ease of opening and reclosing. Even someone who is all thumbs only needs two of them to pry me open, pull out my spout, pour, and fold me reclosed.

SA: All that you’ve said might be true; nonetheless, no package is perfect. Name one of your disadvantages, past or present.

G: Well, back in the day, I was wax-coated. At times, flecks of wax would end up in the milk. A related problem was occasional leaking at bottom corners, where the folding performed on the machinery made my wax thinner in those areas. Those problems were solved when the change was made to coat me with low-density polyethylene, which I sport to this day.

SA: If I may, I’d like to return to your comment about your always having provided ease of opening and reclosing. I take it that you were not talking about the threaded closure you are wearing.

G: You’re correct. I started wearing it a lot later in life. Underneath is a tamper-evident pull-ring plug. I refer to my closure as my sporty little hat. Like it?

G: I can change sizes, too. If the product calls for it, I can put on a larger spout and closure.

SA: I’m going to use that comment as segue into the topic of versatility. You became famous as the milk carton but have since been used for not only a wide variety of beverages but also for non-beverages, even non-ingestibles. Is that a source of pride for you?

G: You bet. Even so, I’ll always have an affinity for milk; for example, I plan on being a major player in the aseptic markets for milk and other low-acid applications.

SA: I suspect that such ambitions rely heavily on the capabilities of the filling machinery, much as was true in your very beginnings.

G: Correct. Further proof that packaging always should be managed from a systems perspective. In that regard, I’m looking forward to innovations in board construction, including barrier layers.

SA: Makes sense. I’d be remiss to end this interview without mentioning sustainability. How do you regard yourself on that front?

G: Even though I predate sustainability by decades, I’ve always had sustainability credentials; after all, paperboard is derived from a renewable resource. But I’d be less than honest not to admit that I have critics who say that papermaking is energy-intensive and uses lots of water. They also mention that my polymer coating complicates recycling. But, as you so correctly pointed out, no package is perfect.

SA: So what do you think of Life-Cycle Analysis?

G: Good as a concept. On the downside, it’s subject to manipulation, so much so that every type of package can use it to argue its own case.

SA: Is there something in your history, not necessarily product-related, that is a particular source of pride?

G: That would be the missing-children campaign. The theme was, “Have you seen me?” I’d use one of my panels to show the face of a missing child and to supply data on that child.

SA: Would you agree that, for all the changes you’ve undergone, were John R. Van Wormer alive today, he would have any difficulty recognizing you?

G: No difficulty whatsoever, even in my newest versions, like the curved top panel that accommodates the aforementioned larger closures or the embossing that enhances the consumers’ tactile experience.

G: Wait. My memory might not be what it once was but I’ve always been good with faces and yours is familiar. We’ve met before, haven’t we?

SA: Yes. Lo, those many years ago. My freshman year. Michigan State University School of Packaging. I served a summer internship at the company that made the Pure-Pak machinery.

G: And you’ve stayed with packaging ever since?

SA: In one capacity or another, yes.

SA: Thanks. That means a lot to me, coming from you, Gabe. 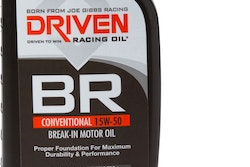 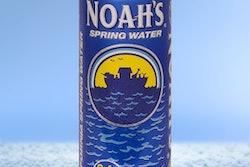 Spring water gets noticed in resealable aluminum can 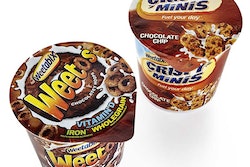