Commentary on MillerCoors punch-top can

MillerCoors still is in the roll-out of its punch-top can campaign, the success of which will be determined by whether consumers are willing to roll with the punches.

Not long ago, it was labeling that featured inks that changed color when the beer has been properly chilled.  Later, it was the vortex beer bottle, so-named because of the spiral neck, said to facilitate smoothness of flow.  Now it’s the punch-top beer can, which has a small indentation that when punched in (more about the mechanics later) results in a hole that admits air, making for smoother (and faster) flow.  All of the aforementioned are from MillerCoors; and, at the very least, the company deserves a figurative lift of a pilsner glass in salute to its strategic use of packaging as a brand-building tool.   But strategies lend themselves to evaluation, and it’s most helpful when that evaluation provides insights that are not limited to the subject product and subject industry.

Function at the junction

Packaging performs the functions of protection, communication, convenience, and utility.  Whatever roles a strategy assigns to packaging should fall under those functions; otherwise, it’s tantamount to asking packaging to perform a task beyond its capabilities.  Then, too, a given feature might be assignable to more than one function.  That’s the case with the punch-top can.

Convenience typically is thought of in terms of a savings in time or effort.  Utility denotes usefulness and functionality, which, by the way, can result in a savings in time or effort.  The distinctions are, to a large degree, subjective, and the point here is not to split hairs; rather, it’s to look beyond categorization in order to determine whether a package feature is likely to build the brand.

Other brands of beer only require the consumer to activate a pull tab before dispensing; therefore, is requiring the consumer to do something additional (i.e. punch an indentation) an imposition that is inconsistent with the notion of convenience? What incentive is there for the consumer to expend the additional (albeit small) time and effort?  If Miller’s public statements are any indication, the incentives go something like this: the punched hole allows more air; the flow is smoother; the experience is like drinking from a pilsner glass; “glug” is reduced; and burping is reduced.  So is the bottom-line incentive that of etiquette? Maybe it’s simple gastronomical calm, desirable regardless of whether one is drinking alone or in a social setting.

Unlike the pull tab, the punch-top indentation does not have a built-in means of activation; therefore, the consumer has to use an instrument. Is that a lack of utility, a lack of convenience, or both?  And why didn’t Miller choose a second, perhaps smaller, pull tab to achieve the added airflow and related benefits?  Maybe it was an issue of cost.  Regardless, Miller seems to have recognized the need to prevent consumers from feeling burdened.  To that end, the company launched an ad campaign challenging consumers to be creative in their choices of instruments with which to punch the top.  Some of the instruments featured in the campaign reflect little or no regard for sanitation; that aside, will consumers regard the latitude in the choice of instruments as adequate compensation for having to choose at all?

Some critics of the punch top have decried it as not being an innovation and have dismissed it as a gimmick.  Any member of the public is entitled to an opinion on any public offering; nonetheless, someone else’s acceptance or rejection of that opinion should not be made without an understanding of how key terms are being defined.

Innovation denotes newness, and by that threshold perspective, the punch top is an innovation, regardless of the fact that there are other ways of achieving the result and irrespective of whether the result is worthy of achieving in the first place.  Necessarily, there are different kinds of innovation, ranging from incremental to break-through, and if only the latter is used as the measure, few features—packaging-related or not—would qualify.

Conversely, gimmick is a term saddled with negative associations, namely, dishonesty.  But even that unflattering association implies a certain level of cleverness—innovation, maybe?—otherwise, the claimed gimmick is unlikely to be successful.  More so, even the most adamant believer that the punch top is a gimmick would not have a bases for claiming dishonesty.  Miller’s claims (relating airflow to product flow and the consequences of same) are plausible.  Whether those claims are relevant and whether they are means for building the brand are separate issues.

And brand-building should be at the heart of any strategy involving packaging, especially with consumer packaged goods; therefore, a company should be less concerned with the innovation/gimmick dichotomy and more concerned with devising packaging that’s honestly promoted and that generates increased consumer awareness, increased sales, and increased profits.

The packaged product: an integrated whole

The concept is that the product and the package are inextricably linked, such that to alter either component is to alter the whole.  Pursuant to that, some critics have attacked Miller Lite and Miller Genuine Drift (the two brands that utilize the punch top) for promoting shotgunning, although MillerCoors (naturally) makes no reference to the practice in which a hole is punched close to the bottom of an inverted can held over an open mouth, the pull tab activated, and the beer jets down the throat. Unsurprisingly, it’s mostly an indulgence of younger folks and can be an expressway to inebriation and binge drinking.  Those drinkers, say critics, will regard the punch-top can not in terms of its promoted claims but in relation to shotgunning and will use the product for that purpose.

Will the punch top be around a few years from now?  If it isn’t, more than a designation of an innovation or a gimmick, it’ll deserve the designation of having been a fad.  That wouldn’t constitute a worst-case scenario. As that noted philosopher Woody Allen opined: “If you hit the bulls-eye every time, maybe you’re standing too close to the target.”   To companies such as MillerCoors that demonstrate an unwillingness to stand pat and a willingness to take intelligent (translated: research-backed) risks in furtherance of packaging, I say, I’ll drink to that. 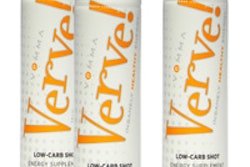 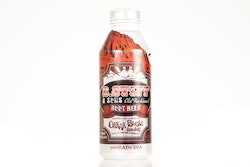 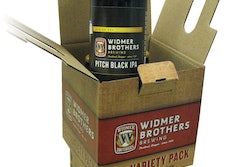