Available in Italy, Comic Beer features three comic strips by acclaimed Spanish illustrator Alberto Madrigal that are secured to a trio of beers via a booklet-style accordion label. 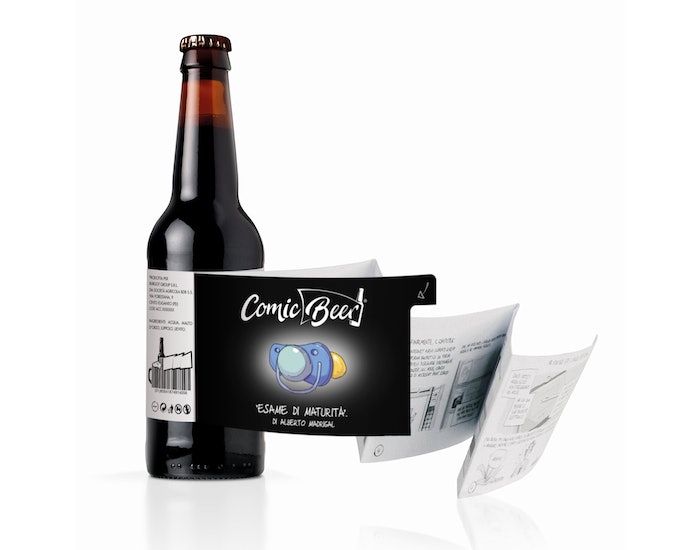 The booklet-style label is approximately 39 in. and includes 16 panels (front and back).

The proliferation of craft beers has opened the door to a bounty of creative graphic designs—from minimalist to heavily illustrated, vintage to futuristic, and whimsical to sophisticated—designed to differentiate. But here’s a new one: a beer can with an accordion-style booklet label printed with a comic strip. The package is the brainchild of European branding and product design agency Reverse Innovation, which tapped acclaimed Spanish illustrator Alberto Madrigal to produce three comics to coordinate with a trio of craft beers.

“Beer and comics make a wonderful match!” says Mirco Onesti, Partner and Creative Director for Reverse Innovation, located in Milan and Amsterdam. “They are informal, but also satisfying at the same time; they are both perfect at just about any time and are two sources of instant gratification—a beer, which gives you a warm, fuzzy feeling, and a comic because it usually compresses an entire story into a few panels. Our idea is to create a sense of regular anticipation for this product, similar to a comic fan waiting at a newsstand.”

The concept was derived from a similar product launched by Reverse in 2015, called Librottiglia, from the Italian libro (book) and bottiglia (bottle), that mixed wine and literature using a “book label.” In that application, the characteristics of each wine were matched to a narrative genre “to create a perfectly balanced, eno-literary experience based on the impressions and scenarios imagined in the stories,” explains Onesti.

Comic Beer, produced for Burgot Group by an independent craft brewery in Tuscany, Italy, comes in three varieties with three different comic strip narratives. “We invited the comic artist Alberto Madrigal to participate in the project because we appreciate his style—which is very special and intimate—and we thought his stories could be perfect to launch an innovative product that requires a particular moment of attention from the consumer,” says Onesti. “At that point, we decided Comic Beer should be different from Librottiglia without a direct connection between the kind of beer and the story. We choose the three comic strips Madrigal had written/designed to be matched with the beers considering criteria as such the subject (Madrigal talks about ordinary themes from everyday life) and the length (remember that beer uses 33-cL bottles).”

Madrigal’s individualistic and ironic style is presented in “Technology and headaches,” a comic used for a blonde Saison-style beer; “If you don’t clean the house, the house gets dirty,” which accompanies a traditional, unfiltered German Weisse; and “Graduation exam,” used with an amber-colored Irish Red Ale. The comics are available in Italian and in English.

The booklet-style label is approximately 39 in. and includes 16 panels (front and back). Explains Onesti, “The cover is plasticized, and you can open and close it even after you have drunk your beer. It’s very convenient and practical, and you can keep it on your shelf, just as you do with other books.” He adds that because the beer is very foamy, it needs to be poured in a glass for consumption, which makes it easier for the consumer to read the comic on the bottle while drinking the beer.

The primary wraparound label is a white polypropylene, while the booklet is made from 80-g glossy, coated paper. The label is printed using a digital press, with a full-color cover and black inner pages. As Onesti explains, the booklet was designed to be easily attached to the bottle in order to simplify the production process. The label is supplied by Italian converter Orograf and is attached at the brewery with an automatic labeler.

Comic Beer was introduced to the Italian market in 2018 and is available online only. Despite its limited distribution, the brand has garnered a positive response both from consumers and from the design community. “It’s a very innovative product for a specific target composed of people who like beer and who appreciate comics,” says Onesti. “We have been receiving a lot of compliments regarding this initiative—and the bronze [award] we won at The European Products Design Award confirms that it’s a project people are interested in. We know that not relying on large distribution channels is a fairly demanding path, but we are excited that Comic Beer will continue to conquer its market, step by step.” Reverse Innovation hopes to launch two more stories by the end of the year.