An 8.5-oz paper bottle used by a L'Oreal startup called Seed Phytonutrients was named a Diamond Finalist in the Dow Awards competition. 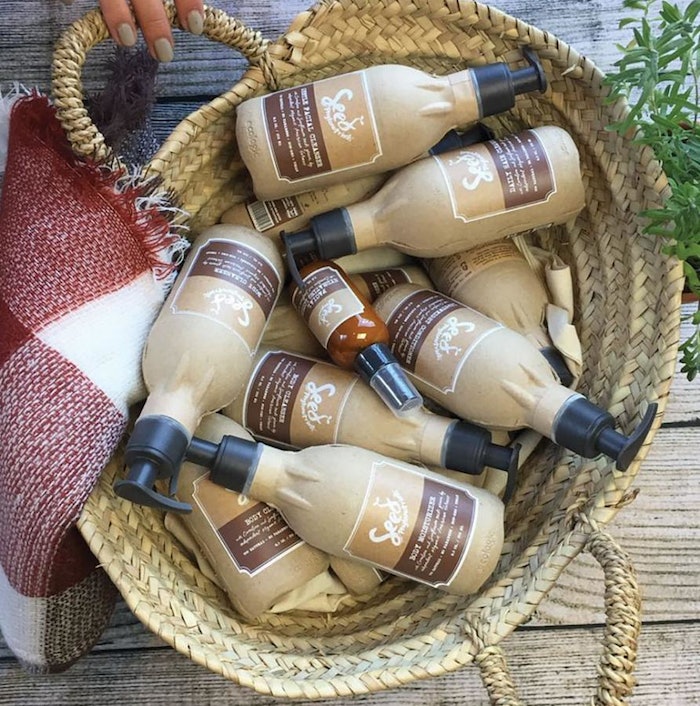 This molded pulp bottle was a Diamond Finalist in the Dow Awards competition.

Developed by Ecologic Brands, the bottle is especially impressive because it has a Version 2.0 element to it. Remember, Ecologic had made plenty of headlines with its molded pulp paper bottle plus inner pouch of flexible film. But by 2015 or so, says Ecologic founder and CEO Julie Corbett, she and her colleagues had realized that the paper bottle format they were supplying to the likes of Nestle Purina and Seventh Generation was woefully suboptimal from a manufacturing efficiency standpoint. So they went back to the drawing boards.

The new and improved bottle says goodbye to the inner pouch and instead has a very thin extrusion blow molded liner that is fully recyclable and is made of 80% post-consumer HDPE. Corbett sees this new inner component as a step toward greater sustainability because it’s easier to incorporate PCR in a blow-molded part than it is with an extruded film.

Evenmore significant is a modification to the two molded pulp shells. Gone is a flange that used to require a glue that caused the fiber to fail prematurely. Now in place are interlocking tabs to bind the two shells together, an approach that is far more robust and reliable, says Corbett. Also notable is the presence of a band of tape that goes around the neck of the bottle. This helps the interlocking tabs keep the two shells together. It also adds top-load strength and keeps the HDPE neck finish in a fixed position when the threaded closure is torqued on.

Because the Seed Phytonutrient line includes shampoos and body washes, the bottle must also be shower-resistant. So a mineral extract that comes from clay is added to the pulp slurry prior to molding. In addition to giving the pulp enough water resistance to last in a shower environment for the life of the product, it acts as a natural anti-microbial agent, too. “You may begin to see early signs of deterioration towards the very end of use,” says Woodworth. “But keeping it waterproof forever is not the goal. We just want it to remain functional in the shower during its useful life.”

Corbett confirms that the bottle has passed the ASTM 6868 composting standard. In regions where commercial composting facilities are scarce or don’t exist at all, the HDPE inner component can be separated from the molded pulp material and each can go into its own recycle stream. Copy on the back label includes the following instructions: “Once empty split the bottle open and discover our heirloom seed packet inside. FUN FACT! This paper bottle uses 100% recycled material and is recyclable, and yes, this eco-friendly bottle is safe to take in the shower.”

Especially notable is how the raw material for the bottle is sourced. Ecologic is making the paper shells from paper and corrugated waste that includes waste from a L’Oreal distribution center in Valencia, CA, about 300 miles from Ecologic’s plant in Manteca. So the Seed Phytonutrients container has a closed-loop quality to it.

For more details on this truly fascinating bottle, see Packaging World’s coverage in the April issue here:https://www.packworld.com/article/package-type/containers/bottle/papers-pressing-forward. We also asked Corbett for an update on where things stand now in Ecologic’s quest for an improved method of manufacturing efficiency these bottles.

"In August our new automated bottle-making system went into production in our Manteca, CA, facility,” says Corbett. “It’s now fully integrated into the production of L’Oreal’s 250-mL Seed Phytonutrients bottle. It’s still new and being proven, but we like what we see. This machine will remain in our plant, but the next one will go to the plant where Seed Phytonutrients is being filled. That way, we can ship nested shells to the bottle-filling facility rather than assembled bottles. Additionally, Ecologic and L’Oreal have partnered to create a closed-loop waste-to-value supply chain. Ecologic is now using L’Oreal’s corrugated waste generated from their Salon Centric distribution center near Los Angeles as the raw material for the production of the Seed Phytonutrients 250-mL eco.bottle®. For every seven tons of L’Oreal’s OCC waste, Ecologic makes 70,000 bottles. This is the realization of Ecologic’s Box to Bottle® system of providing companies with an importantsolution for their paper/cardboard waste, a more efficientsupply chain, and a package that has less impact on the environment.”