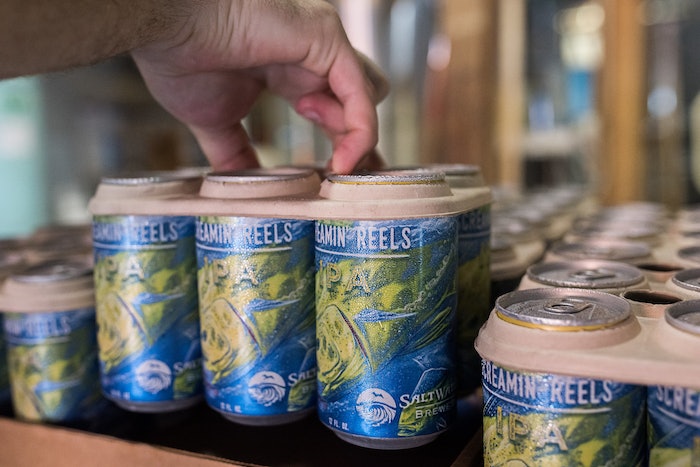 For some of us, the image of wildlife trapped in plastic beverage carriers is etched in our retinas. Typically used for six-packs of beer or soft drinks, these carriers hold cans together, but often end up in oceans where wildlife can become entrapped and even poisoned by them upon ingestion.

A more sustainable option comes from Delray Beach, FL-based SaltWater Brewery, which has begun using the new Eco Six Pack Ring, E6PR™ (see video). Made of barley and wheat ribbons used in the brewing process, E6PR is said to provide the strength necessary to hold cans through distribution. The carrier is also designed to be compostable, both on land and if left in a water system where the organic materials are said not to harm wildlife upon ingestion.

SaltWater says its goal “is to maintain the world’s greatest wonder by giving back through ocean-based charities [CCA, Surfrider, Ocean Foundation, MOTE] and the Edible Six Pack Rings. …Packaging is done on-site with the brewery’s in-house canning line, as well as their new in-line labeler for seasonal and special releases.”

Chris Gove, President and Co-Founder of Saltwater Brewery, says, “Saltwater Brewery was founded in 2012 with a mission to not only brew good beer, but to give back to our oceans. The Eco Six Pack Rings help to further our mission by keeping plastic out of our landfills and out of the sea, and we are proud to be the first brewery to implement the rings and package 100% of our beer with them.”

E6PR, which was founded by three groups in 2017, has generated considerable media attention. One comment on its website that will certainly get the attention of the packaging community: “E6PR is just the beginning of what should become a movement to rid the packaging industry of plastic.”