Cuvée Coffee’s cold-brew nitro coffee in an aluminum can uses widget technology to achieve the same smooth, foamy pour as achieved from a tap.

The first to the table with nitrogenized coffee in a can, Cuvée Coffee of Spicewood, TX, can’t keep up with the demand for its Black & Blue cold-brew nitro coffee. That’s according to Mike McKim, founder and CEO of Cuvée, who says that while the product was originally launched in kegs, “cans were always the end game, for all the same reasons that the craft beer industry has adopted them.”

He adds, “I’m a craft beer enthusiast, and I love all the advantages that cans bring to the table for premium beverages.” Among them, convenience, portability, sustainability, and protection from oxygen and light.

Cuvée Coffee was founded in 1998 by McKim as an exploratory hobby. As he experimented with specialty coffees, he found a large market for his products. Today Cuvée operates a coffee shop, training facility, and retail location selling its handcrafted coffees.

In 2014, when Cuvée investigated the possibility of introducing its nitro coffee to retail, the challenge was finding a packaging technology that could create the same smooth, foamy pour as achieved from a tap. “Obviously the first call I made was to Guinness to inquire about their widget,” says McKim. “Their technology was not available for license, but fortunately I read a press release about Oskar Blues releasing a nitro beer in a Ball widget can,” he says.

For Black & Blue, Cuvée chose Ball’s 375-mL aluminum widget can. The widget stores nitrogen gas that is released into the coffee when the can is opened to create a frothy head. McKim says a certain amount of nitrogen also needs to be suspended in the product itself to achieve the foam.

Playful graphics on the can, created by an Austin, TX-based artist and McKim’s wife, Rashelle, are a play on the product name, which was conceived by combining the idea of black coffee with Cuvée’s signature color, blue. Against a blue background, an illustration in white shows a cartoon-like character of a 1950’s boy with a black eye, stars circling his head.

“The illustration was inspired by a Normal Rockwell painting of a young girl sitting outside the principal’s office with a black eye and a big grin on her face,” explains McKim. “Obviously the idea of a girl with a black eye would be the worst idea in the world, but that Americana style and play on ‘black and blue’ was a huge inspiration.”

Cuvée’s Black & Blue was introduced in late 2014 and in 2015 won BevNET’s Best of 2015 Award for Best Packaging Innovation of the Year. Said BevNET, “It’s really the first time in ‘third-wave coffee’ where a shelf-stable format is truly a straight replica of something you’d buy in the shop.”

The coffee is refrigerated and has a shelf life of 90 days; Cuvée is currently working on a product with a 12-month refrigerated shelf life. Black & Blue can be found in stores in Texas, New York, New Jersey, and Connecticut for $3.99 per can and for $14 for a four-pack. 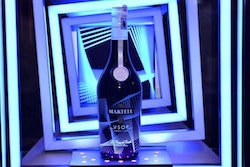 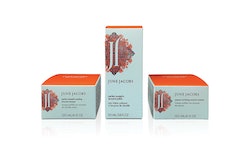 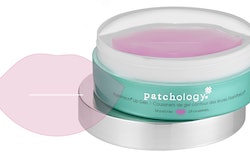 Transdermal eye, lip patches are ‘genius in a jar’