To help build brand equity and drive sales, makers of spirits, wine, and other alcoholic beverages employ both structural and graphic design elements, using package shapes, labels, and other decorative methods to create shelf appeal for their primary packages.

These boxes were created specially for CBA by its vendor xpedx, a business of International Paper. IP makes the 32-ECT, B-flute pack, which measures 11 3⁄16 in. H x 5 13⁄16 in. square. Litho-printed in four colors, the box includes die-cuts on all four sides that function as windows, curving around all four corners to allow customers to see all the bottles inside the box. At this point, two Widmer varieties—Nelson Imperial IPA and Pitch Black IPA—are sold in the pack, but CBA has the option of selling four different varieties within the four-pack.

The glass bottles are supplied by O-I. Widmer uses a 72-head rotary filler to fill them on its glass line in Portland that also accommodates 12-oz longneck and stubby bottles. Once the 22-oz bottles are filled, labeled, crowned, etc., they’re placed in unmarked cases and sent to nearby xpedx for manual filling into the hand-erected cases.

CBA’s needs
According to Kyle Jennings, senior director, supply chain with CBA, “We’ve used xpedx on and off for three years here in Portland for basically anything out of the norm. This was a prominent project. We had a concept to market up to four different varieties of our larger 22-ounce bottled beer, but we didn’t want to create different packaging for the different beers. We wanted more of a ‘universal’ pack. And, we wanted it to be different. So we worked with xpedx to develop this pack.”

For the Widmer pack, CBA sought bottles visible within the box to consumers, a box that would be easy to carry, yet sturdy enough to hold the 9.5 lb of combined product and packaging. CBA also needed assistance in assembling the box and repacking product into the variety pack before sending it back to CBA for nationwide distribution.

“Craft beer drinkers are going after larger bottles so they don’t have to commit to an entire six-pack that has just one variety,” notes Aaron Burget, assistant brand manager, Widmer Brothers. “To deliver to this demand, we needed to create packaging that makes the bottles visible, is easy to carry and open, and would not require an entirely new package with each new variety combination.

“Allowing customers to see the bottles adds great value. Our main goal was to create a package that reveals the bottle labels inside so that we didn’t have to change the graphics on the box with each new offering. The box also needed to allow us to quickly switch out the beer varieties inside—xpedx’s design met these goals for us.”

Although customers may consider the packaging concept simple, according to a press release announcing the variety pack, creating it took a great deal of work.

Gaby Roberts, custom services specialist, xpedx, served as project manager for the design and fulfillment. She says, “Creating this box with open corners was a huge achievement, because this is not how you would typically construct the box in a box plant,” she says. “The box is an elegant design, but it needs to be sturdy enough to handle 9.5 pounds of product. With its open windows, it had to have enough surface area to accommodate the customer’s graphics. And we had to pack it inexpensively enough for Widmer Brothers to reach the price point it was seeking.”

Through its Custom Services department, xpedx provided the kitting and fulfillment and made ready the product for delivery to wholesalers. “xpedx brings it all together, and its outstanding project management is important,” Burget says. “We make beer seven days a week here; to pack these specialty boxes by hand ourselves would be expensive and slow for us. But xpedx handles everything, and it’s very competitive in price.”

Toasting the pack’s benefits
CBA’s Jennings says enabling consumers to see the bottles in the case also allows them to look at individual ink jet-printed bottle code dates. “That is important for a couple of reasons,” he says. “We have certain states we ship to, so from a regulatory perspective we had to be able to see the code date because that tells you which brewery the beer came from.”

Once xpedx palletizes the variety packs, it sends them back to CBA for shipping, where the variety pack has also produced advantages. “One of the side benefits that we didn’t plan on but we got was that we’re able to get more on a pallet than we were with our ‘normal’ cartons of this size of beer.”

He says that is due to a pallet-stacking pattern developed by CBA, and the fact that CBA uses a slightly larger pallet than it does for pallet loads of 22-oz beers not sold in the variety pack. CBA places three four-packs on a tray as it builds pallet loads. The box offers sustainability benefits by increasing pallet capacity 40%, which reduces shipping costs.

Besides that 40% gain, Jennings estimates the die-cut corners reduce the amount of corrugated by about 15% compared with traditional cases that don’t have the windows.

He notes that despite the windowed corners, the glass bottles are positioned so that they do not contact the edge of the pack, therefore boxes don’t rub against glass bottles and cause damage during transit.

In all, the variety pack provides market differentiation as well as sustainable and financial material and transportation savings. To top that off, Jennings says customers have responded favorably to the variety pack. Now that’s worth a toast! 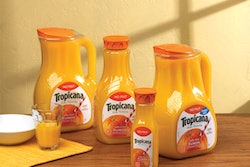 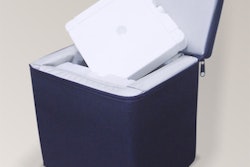