Walgreens donates 375,000 doses that UPS air-ships more than 9,000 miles in five days through five countries, maintaining mandatory 2° to 8°C temperatures through a range of climates. 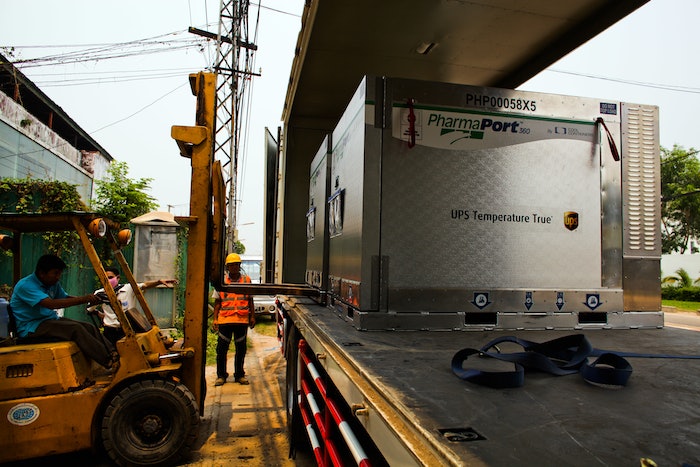 In late April, as flu season approached in Southeast Asia, Walgreens’ donation of 375,000 individual doses of seasonal flu vaccine reached Lao People’s Democratic Republic (referred to as Lao PDR or Laos) for administration to a population in need.

Sourced from Europe, the vaccines in glass vials were initially shipped to the Louisville, KY, facility of UPS. Each of two pallet loads of vaccines was loaded into a PharmaPort ™360 pharmaceutical-grade, temperature-controlled container from Cool Containers. Both containers were preconditioned by UPS so that they were within the 2°C to 8°C temperature range required to keep the product efficacious.

What seems like a logistical nightmare to some was a challenge that UPS met through nearly 50 company experts who planned, managed, and tracked the air shipments from Louisville to Laos. Mark Davis, product manager with healthcare logistics global strategy at UPS, explains, “One of the critical requirements of the project was that throughout the transportation cycle we maintain that two- to eight-degree Celsius temperature range. We put together a team of healthcare logistics experts and came up with a UPS Temperature True solution that we provided to Walgreens, which they subsequently accepted.

“There are no second chances when it comes to moving a product this critical,” states Davis. “You think about the importance of the shipment to Walgreens, and to UPS, but unlike here in the U.S., where we can walk to a corner Walgreens store for a flu shot, in Laos you can’t do that. So these vaccines are extremely important for the people of Laos. At the end of the day it really is about getting the vaccines to those who are in need. It’s really about the patient.”

UPS, Walgreens, and the Laos government coordinated the effort. Once the two containers were plugged into electricity and preconditioned to reach the appropriate temperature, they were positioned onto a UPS plane for their first journey to Anchorage. The next stop was Incheon, Korea, followed by Shenzhen, China, just outside of Hong Kong. Afterwards, they were flown to Bangkok, Thailand for a nearly 20-hour truck ride to Laos. Refrigerated trucks were unnecessary as the PharmaPort containers served as the vaccines’ refrigerator.

All the air transportation was via UPS Airlines,” says Davis. “At the end, the product had traveled 9,000 miles in five days through five countries. If you think about the variations in temperatures, you have Anchorage, which is relatively cold, and you have Bangkok, then Laos, which is extremely warm and very humid.

“The other part of that is traveling in an airplane at 35,000 feet, where temperatures can fluctuate dramatically. You have to factor all those different temperature variations into the solution. Some people may look at this and say it’s a logistical nightmare, but that’s what we are in business to do—create the best plan to protect products.”

That, says Davis, also included monitoring the conditions of the container, the inside temperature, the outside temperature, and so on throughout the transportation cycle. Monitoring was conducted through three UPS ground-based control towers, or centers, located in Singapore, Alpharetta, GA, and Brussels.

“We have control tower agents in front of computers who are constantly on the phones monitoring the shipment 24/7, whether it be via Web sites or the GPS-GMS system that’s included with the PharmaPort 360 containers,” says Davis. “They monitor all these and proactively respond if they start seeing things potentially going in the wrong direction, or if a scan hasn’t taken place when it’s supposed to occur. Then, they intervene to make sure that the shipment gets back on track.”

Those events did not occur during this mission. Once vaccines reached Laos, the two pallets were immediately unloaded from the containers, directly into the government facility that was going to begin administering the flu treatments.

“Quite frankly,” says Davis, “the PharmaPort 360 containers performed flawlessly. The transportation process was executed exactly as planned.” The Laos Ministry of Health, at press time, was continuing to administer the flu doses to Laotians, focusing initially on the neediest: seniors, pregnant women, young children, and people with various chronic medical conditions, as well as healthcare professions.

Meanwhile, the empty PharmaPort 360 containers were loaded back onto the trucks and driven back to Bangkok to begin the journey back to Louisville to be inspected, cleaned, and prepared for reuse.

According to a Walgreens press release, the Lao PDR Ministry of Health (Lao MOH) was selected to receive the vaccine based on longstanding collaborations between the Lao MOH, the World Health Organization (WHO), and the U.S. Dept. of Health and Human Services’ Centers for Disease Control and Prevention (CDC), as well as Walgreens objective to provide vaccine to a population in need.

“This is an example of the potential value of collaboration between public health and private organizations,” says Dr. Joe Bresee, chief of the Epidemiology and Prevention Branch in CDC’s Influenza Division. “Influenza vaccination is an important tool to reduce respiratory disease in Laos, particularly among people who are at risk for serious flu complications, including pregnant women, the elderly, and people with chronic health conditions. We’re excited to help make this happen.”

Walgreens has worked with the CDC and the Dept. of Health and Human Services (HHS) to help increase the number of people vaccinated against influenza in underserved communities across America.

“In recent years, going back to the 2009 H1N1 pandemic, we’ve demonstrated the positive impact we can have by helping to increase flu vaccination coverage while working together with government and health officials at every level,” says Kermit Crawford, Walgreens president of pharmacy, health and wellness. “As flu season winds down here in the United States, we’re pleased to provide vaccine to the people of Laos and to work with the Ministry of Health to help launch its seasonal flu vaccination effort.”

Laos has a population of more than 6.7 million people, and during the 2009-2010 flu pandemic more than 1 million people were vaccinated against 2009 H1N1; however, the country does not have an ongoing seasonal flu vaccination program.

“The Ministry of Health in Laos has worked collaboratively with CDC and WHO to establish the infrastructure to implement this seasonal flu vaccination campaign. They are ready, and on April 24 the country [launched] the vaccination campaign across Laos with the donated vaccine from Walgreens,” says Bresee.