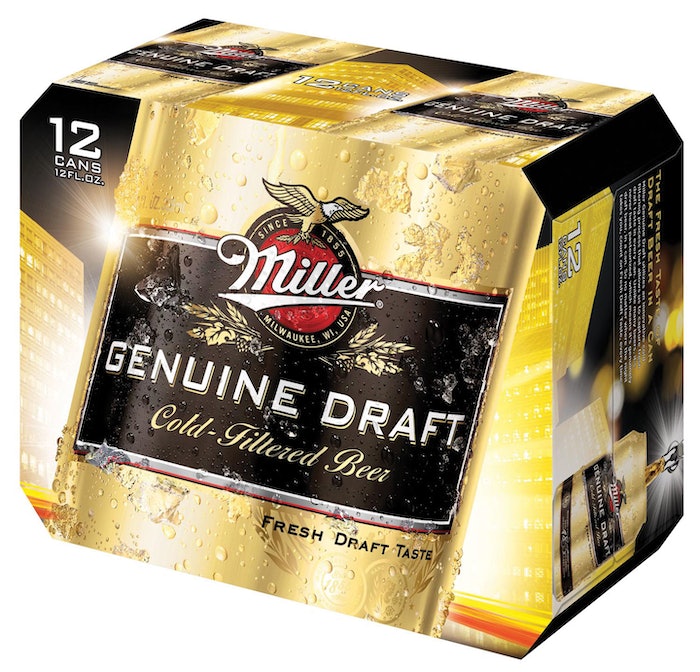 Redesigned graphics that combine a nighttime “cityscape” with a golden flow of beer lend a simple elegance and appeal to packaging for Miller Genuine Draft in the U.S. Based on positive initial consumer test-group results, parent company MillerCoors is encouraged that the new packaging will help drive brand sales and market share.

The new look began hitting U.S. store shelves in November 2011, with a national transition to the packaging anticipated early this year. The “black label” graphics adorn labels on glass and plastic bottles, aluminum cans, and paperboard cartons. MGD is sold in 60 countries. With the new changes, U.S. packaging is now in synch with the product’s global trade dress.

“The change was initially driven by the fact that Miller Genuine Draft internationally changed its secondary packaging,” says MGD brand manager Jennifer Anton. “The primary packaging had incorporated the black label look, and the global brand had been performing really well in this new design. We wanted to get our packaging to the same level as the rest of the world’s packaging. The design is one that we used years ago that we moved away from, so we’re excited about it. We think it looks good, kind of sexy.”

More importantly, perhaps, consumers who were tested on the potential new look during the first quarter of 2011 also liked the redesigned package graphics. “Consumers said it was simple, modern, and masculine, and we had a very good response from Hispanics,” Anton says.

Although that particular research did not involve social media, social media was used in other areas of package development. Anton explains, “We did use social media before we finalized the package redesign by giving consumers a sneak peek of it on our Facebook page, and we received consumer feedback. Then we also asked consumers once they start seeing it at retail to take a picture of it and post it on Facebook—so we incorporated social media not only in the development stages, but also at the back end.”

Inland Label prints all domestic and international MGD labels. Anton credits The Brand Union with the cityscape design with the bottle in the forefront. “We then hired brand consultant Landor to optimize the look in the U.S.,” says Anton. McDill Design took the design across MGD’s different U.S. packaging formats.

“Landor took the design and added a side panel to paperboard cartons that describes the story of draft beer in a bottle. Then McDill took the design across the packaging and tied it to the global packaging,” she says.

Economic justification
Given the economic climate and the competitive beer market, how does MillerCoors justify the costs involved in the package redesign? Says Anton, “It’s definitely an investment in the brand. We find economic justification from the sense that the beer itself is really well liked by a broad consumer base.

“When we tested [the new look], consumers reacted very strongly [in favor of] the new packaging. They actually told us that out of one to 10 drinking occasions, with the previous packaging, they would select Miller Genuine Draft about one and a half times. With the new packaging they said it would be about three. The proof will be in the pudding when the design hits the retail market. But from our research, that’s how much they liked this packaging. That helped us justify the investment. As far as managing the actual costs involved with the redesign, it helped that we leveraged economies of scale with the global look. So we weren’t starting completely from scratch with the new brand design.” Also, the graphics did not require any packaging line changes.

Asked to describe the significance of packaging on a broader scale for MillerCoors, Anton explains: “Packaging is absolutely important in the larger sense. It really helps us tell our story and in particular for MGD, because it’s draft beer in a bottle. Packaging graphics need to depict ‘draft beer in a bottle’ and the appeal of that golden flow, and then merge the new draft with the energy of the city at night. It has to give the package life on the shelf. When you consider those test results upfront that indicate the packaging could double the number of drinking occasions MGD gets from one and a half to three out of 10, that’s a big jump.”

Anton adds, “The proof will be in shelf sales, but packaging is really important to us in the sense that it helps us tell our story. Remember that this is what sells the product, what makes it into the consumer’s refrigerator. Packaging is key and really serves as one of our most important forms of advertising.”