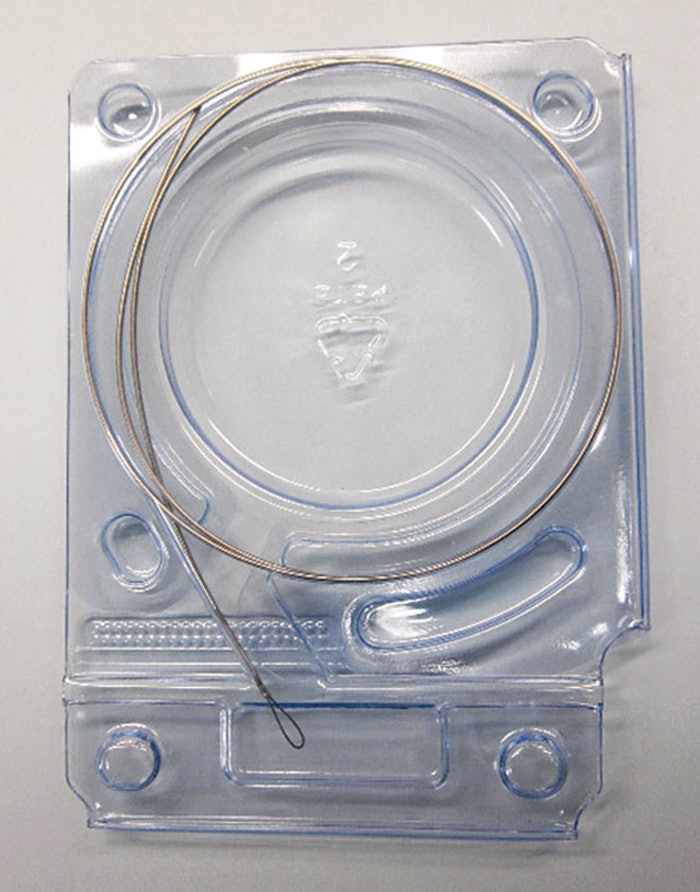 Arthrex Inc. has developed more than 5,000 products for arthroscopic and minimally invasive orthopaedic surgical procedures designed to make demanding surgical procedures safer and more reproducible. What the Naples, FL-based company doesn’t tout on its Web site, however, is its wisdom in packaging some of these medical devices.

“We’ve worked with Perfecseal for about seven years, so that speaks to our relationship,” states Stephanie Riley, a packaging engineer at Arthrex. “The PETG provides clarity, is easy to validate for regulatory purposes, and the blue tint provides an appealing look in the medical device field. We use the package for different wires of varying lengths and materials.”

Perfecseal and Arthrex designed the innovative package to overcome the challenges manufacturing faces in assembling suture-passing wire. Using a three-paneled, thermoformed package design eliminated the need for a heat-sealed lid on a previous package. That reduced not only the cost of the material, but the labor and energy expenses of sealing each pack, which is considerable given that Arthrex sells nearly 100,000 of these units annually around the globe.

By eliminating the heat-sealed, coated lid, which is not recycled, it is estimated that at least a 25% material reduction was achieved. Also, excess material in the center of the primary fold-over panel was removed to reduce overall package weight, which helps minimize transportation costs and emissions.

The new package design also benefits Arthrex as it speeds manual product assembly and provides protection for the surgical wire during assembly, sterilization, and distribution phases.

Riley points out that another important benefit is that the change did not require any equipment modifications, thus eliminating the need to go back and revalidate the equipment and/or heat-seal tools associated with the original packaging configuration.

Once assembled in the pack, the clamshell assembly is packaged into a polyethylene/Tyvek® pouch from DuPont. The Chevron-style pouch from Mangar Medical Packaging is heat-sealed.

Conservatively, it is estimated that the combined financial savings from the packaging change come to about $80,000 per year. Other benefits include the following:

• Larger ribbed panel of the clamshell is folded over and snapped to the base panel to create a nearly enclosed wire channel. At the time of use, the nurse opens a folded-over panel using a thumb-tab to access the head of the surgical wire to remove the product.

• Improves branding by adding the Arthrex logo and part number to the secondary sterile-barrier package. The previous design did not use the company name or part number.