Made entirely from bio-based raw materials, the ‘green’ bottle mimics the properties of PET and is fully recyclable. 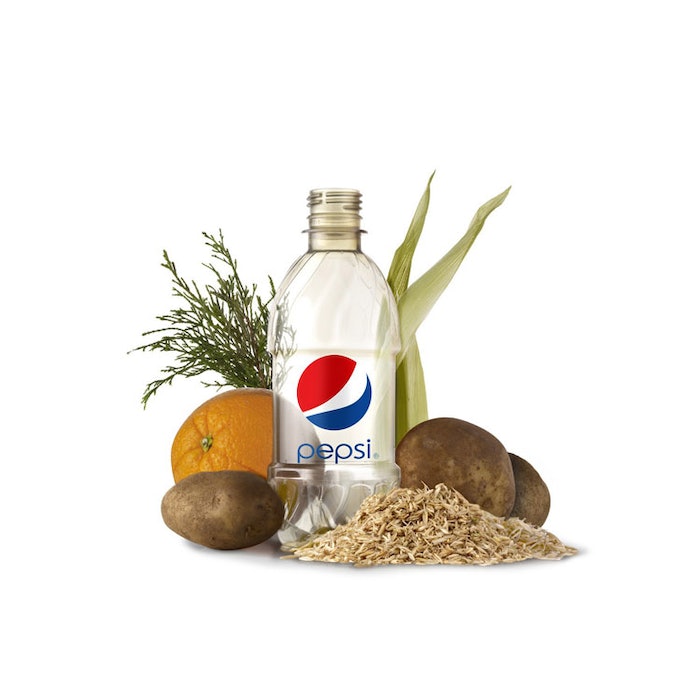 PepsiCo has announced that it has developed what it says is the world's first PET plastic bottle made entirely from plant-based, fully renewable resources, enabling the company to manufacture a beverage container with a significantly reduced carbon footprint.

PepsiCo's "green" bottle is 100% recyclable and is made from bio-based raw materials, including switchgrass, pine bark, and corn husks. In the future, the company expects to broaden the renewable sources used to create the bottle to include orange peels, potato peels, oat hulls, and other agricultural byproducts from its foods business.

"This breakthrough innovation is a transformational development for PepsiCo and the beverage industry, and a direct result of our commitment to research and development," says PepsiCo chairman and CEO, Indra Nooyi. "PepsiCo is in a unique position, as one of the world's largest food and beverage businesses, to ultimately source agricultural byproducts from our foods business to manufacture a more environmentally preferable bottle for our beverages business—a sustainable business model that we believe brings to life the essence of Performance with Purpose."

Combining biological and chemical processes, PepsiCo has identified methods to create a molecular structure that is identical to petroleum-based PET, which results in a bottle that the company says looks, feels, and protects its product identically to existing PET beverage containers.

PepsiCo will pilot production of the new bottle in 2012. Upon successful completion of the pilot, the company intends to move directly to full-scale commercialization.

"As You Sow applauds PepsiCo's innovative packaging design," says Conrad Mackerron, senior program director of As You Sow, a San Francisco-based foundation, which promotes corporate social responsibility through shareholder engagement. "By reducing reliance on petroleum-based materials and using its own agricultural scraps as feedstock for new bottles, this advancement should deliver a double win for the environment and PepsiCo."

When this CEO learned of a paper bottle that would both differentiate his new line of household cleaners and be more sustainable, he had to have it for the launch.
Pat Reynolds
Nov 4th, 2020

Tekni-Plex’s patented Sniff Seal closure liner gives brand owners a way to showcase product scents/aromas without breaching the seal and compromising the contents. It is is compatible with mask wearing by enabling scent permeation through the liner.
Tekni-Plex
Nov 4th, 2020
More in Materials & containers

Aptar Food + Beverage announced its partnership with MIWA Technologies, a Czech Republic-based company that has developed a standardized, reusable solution for the distribution of goods.
AptarGroup
Nov 2nd, 2020

Polyplex USA announced a $100 million plus expansion to its Decatur, Ala., facility with the addition of a second thin BOPET film line.
Polyplex (Americas) Inc.
Oct 9th, 2020

Company begun by Emil Thiel in 1935 is still family owned and growing beyond the initial objective of “we fit the tag to its purpose.”
Badger Tag & Label
Oct 9th, 2020