Bevology, a start-up company based in San Francisco, CA, didn’t want its Zenergize Energy+ fizzy drink tablets to fizzle at Costco. So it developed suitable packaging under the club store’s guidance, including focus-group tests conducted with 100 consumers. 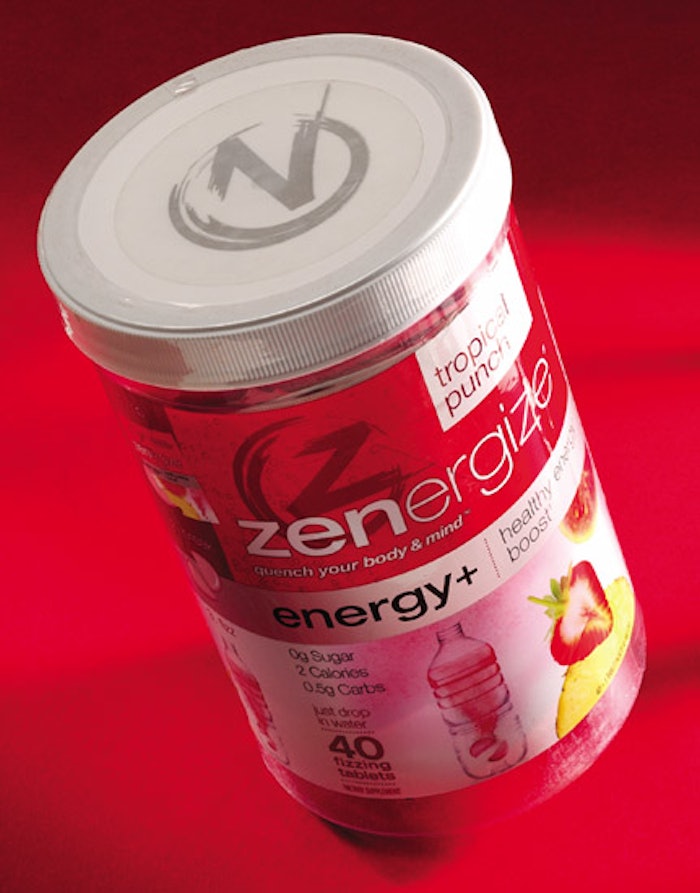 That effort has paid off. The 40-count canister, launched in early 2007 into 20 select Costco locations in Los Angeles and Hawaii, was expanded into 50 LA-area Costco stores by fall.

The sleeved canister provides shelf impact and met consumers’ and Costco’s needs, according to Bevology director of marketing Michelle Arnau. She says the key points that Costco wanted addressed were value and flavor. Bevology found that consumers also liked the 40-count canister because it conveyed value and drew their attention.

Initially, the canister was adorned with a pressure-sensitive label, which was rich in detail, but it was also very expensive, says Arnau. “Costco needed us to bring the item price down to under $20,” she says. “The switch to the sleeve provided the quality of a label in a cost-saving format that eliminated the need for a safety seal, which had been a separate component.

“Costco provided graphics input, though the overall graphic design was ours [created by The Engine Room. Both the packaging and the graphics had to convey that the product is portable and that it’s different.

“This was a huge win for us. The product is doing extremely well, and we’ve seen great consumer and retailer feedback. We also foresee a longer-term partnership with Costco.”

Listen to a podcast of the Michelle Arnau interview at packworld.com/view-24212