New can label adhesive applicators reduce adhesive use by 25%.

One of the improvements Bush Brothers, , made last year to its canning operations was revamping a wraparound labeler. The baked-bean processor also changed the way it applied the hot-melt adhesive that permits the labels to stick to the cans. That change has reduced glue use, improved safety, and cut maintenance and clean-up time.

One of the key benefits to the PatternJet is a reduction in adhesive usage by 20 to 30%, according to Bush Brothers maintenance manager Steve Chowanec.

The PatternJet system replaced a wheel-pot adhesive system, which has been a standard method used in plants for more than 30 years. It comprises a hot melt adhesive, heated in a reservoir, that’s pumped to a roll that applies the adhesive directly onto the can wall and lap area of the label to close the seam. It is an open-air, direct-contact system that prompted concerns associated with the high temperatures—the adhesive is heated to 300º F—and fumes around the operator, according to Chowanec.

By contrast, PatternJet—introduced about two years ago—uses an enclosed system with spraying of the adhesive.

The system uses two PatternJet guns. The first PatternJet applicator, called the pick-up gun, applies adhesive to the can, which is held spinning on one of the labeler’s 48 spindles. Mounted on a stand, it comprises six modules, each with a nozzle. A no-can, no-application sensor confirms the presence of a can before it applies a “mini-swirl” pattern to the can wall.

The can is moved toward the label stack where it picks up a label. And that’s where a second PatternJet gun, the lap seam gun, is mounted. It applies adhesive to the label’s cross seam that seals the label. The lap gun has three modules and a “slot” nozzle sized for the largest container. The slot nozzle produces a full “ribbon” pattern of adhesive. That results in a label that looks exactly the same as before, which was what Bush Brothers wanted. The labels are made of paper or metallized paper.

One problem the operation faced before was monthly clean-up of the glue pots. “We’ve eliminated the clean-up required for the glue pots that totaled eight hours a month,” he says. “That also meant the labeler needed to be down for that time.”

Now, operators remove a nozzle set at the end of the week and can clean it while a second set is in operation. That just takes 15 minutes, and cleaning the unused set is done off-line.

Changeovers are much simpler than before. Chowanec says the plant makes about one changeover per shift at the two-shift operation. This is done via a recipe call-up on the labeler’s new touchscreen panel that directs the preset number of modules that will be used, dependent on can size. That can require anywhere from three to six modules, according to Chowanec. Some physical adjustment of a nozzle may also be needed, he adds, done easily using a dial adjustment. The operator panel interface permits adjusting when and for how long the jets apply the hot melt.

The company tried to use its existing glue, but it was not a good match, according to Chowanec. A switch to another formulation from Bush Brothers’ adhesive supplier worked. The type 34-396C hot melt from the Adhesive Div. of National Starch and Chemical (www.nationaladh.com) comes in block form. An operator supplies two or three blocks of hot melt into the reservoir every 15-20 minutes. This is a better process than before, when operators scooped in smaller forms of adhesive into two reservoirs, Chowanec says.

“This system gives us precise control of the adhesive—where and when we are applying it and how much we’re applying,” summarizes Chowanec. 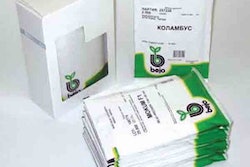 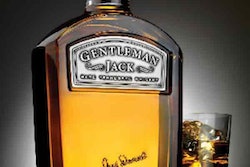