Situated near , in a small town called Leppersdorf, the enormous dairy called Mueller-Plant is filled with enough automated packaging equipment to make even a veteran packaging journalist dizzy. Among the highlights:

• a line for slicing, packaging, and case packing of sliced cheese

• a line for secondary packaging of round cheese pieces into corrugated trays followed by robotic placement of the trays onto pallets.

This story looks at both operations, beginning with the sliced cheese line.

The sliced cheese line begins with a servo-driven automatic slicer from Weber (www.webernet.de) that attains impressive levels of throughput, flexibility, and accuracy thanks to the servo technology on which it’s based. Including infeed, slicing, and discharge stations, a total of 23 servo motors are deployed. All are supplied by Elau (www.elau.com), as is the PacDrive controller that commands the servos.

Cheese is fundamentally difficult to slice and package automatically without sacrificing either throughput or weighing accuracy. This is partly because the roughly 50-lb blocks fed into the slicer are never uniform in dimension or weight. And on top of that, the pattern of holes in, say, Swiss cheese is never uniform.

The Weber system confronts these challenges head on by “deciding” how each block of cheese should be sliced. First, incoming blocks of cheese are scanned by a laser. Software then instantly calculates dimensions and weight and sends this data to the central controller so that the slicer knows how thick the slices need to be in order to get, say, seven slices that weigh 200 g. Also helping to determine slice thickness is a vision system/software combination that takes into account the size of the holes when Swiss cheese is being sliced and sends that data to the controller, too.

Slices drop from the rotary cutting blade onto a positioning belt. When the correct number of slices are on this belt, it advances and sends its stack of slices to a checkweigher. While this is happening, the slicer continues to cycle but the product feed belt does not advance the cheese block into the blade until the positioning belt is still.

Data from the checkweigher is constantly sent back to the slicer so that it knows how many grams of cheese it is putting in each stack. If a stack is outside of predetermined parameters, the slicer automatically adjusts slice thickness accordingly. The number of slices in a stack won’t change, but slice thickness may go from 1.60 to 1.62 mm, for example. Without a servo-based controls architecture, such on-the-fly adjustments would not be possible, says Weber’s Carsten Reisz.

“Servo-based technology gives the machine maximum control over slicing precision and belt movement,” says Reisz. The smooth acceleration and deceleration of belt speed is crucial, he adds, because at these speeds—up to 130 packages/min—any hasty or jerky movements would cause the stacks of cheese to shift their position on the conveyor belts and cause handling difficulties.

Stacks of cheese exit the slicing machine and are automatically fanned out into four parallel lanes by a series of Weber-designed conveyor belts. A few feet later sits the Multivac (www.multivac.com) thermoform/seal machine that forms the plastic sheet into which the cheese is packed. The cheese is conveyed automatically into these thermoformed cavities.

Evacuation of ambient atmosphere, backflushing with CO2 and N2, and heat sealing of lidding material are next. But just ahead of these operations is Weber’s Portion Control System (PCS). Essentially it’s a bank of LED lights where each light represents a single thermoformed cavity. If the weight of the cheese in any cavity is low or high, that condition will be detected by the upstream checkweigher and communicated to the PCS, thus causing a specific LED light to be turned on. When the operator stationed at the PCS sees a light lit up, he knows he must add or subtract a slice of cheese to that package.

The accuracy of the upstream slicer, and its ability to adjust slice thickness on the fly, means that 95% of the packages that reach the PCS already have an acceptable weight in them. But the inherent unpredictability of cheese means that once in a while, a stack will reach the PCS and be outside of acceptable weight parameters. Thanks to the PCS and the operator who monitors it, inaccuracies are caught and corrected.

Exiting the lidding station of the Multivac system, packages receive a thermal-transfer-printed label with a best-by date. It’s applied to the bottom of each package by a Multivac pressure-sensitive labeler. Packs are then cut from the continuous web into individual units and single-filed before being conveyed into the A+F case packer that handles secondary packaging.

Like the Weber system at the head of the line, the A+F (www.afautomation.com) ModuLine case packer also benefits greatly from servo-based design principles. It has 12 axes of motion executed by Elau servo motors. Again, an Elau PacDrive controller controls the case packer.

“It always comes down to value and reliability,” says Mueller Project Manager Jens Martin in explaining why the A+F machine was selected. Considerable customization was required, too, he adds, and A+F was willing and able on that front.

Some of the customization centered around the issue of versatility. A number of primary pack sizes and case counts need to be handled. Servo technology brings the necessary versatility to the machine.

In operation, the case packer is also responsible for erecting and gluing both the case and the case lid. On the day Packaging World visited, 36 primary containers of sliced cheese were being case packed in a vertical orientation. To accomplish this assignment, the system first upstacks 12 units and then pushes all 12 into a reciprocating arm that pivots 90 degrees to place all 12 packs into the waiting case. The case then indexes forward once to receive its second group of 12 packs and once again to receive the final 12. In subsequent stations, case corners are tucked and glued around the top of the case. In a final station, a corrugated case lid is formed and applied.

Noting that the machine is capable of multiple case sizes and a variety of pack patterns in whichever case is in production, Martin tells PW that “Much of the changeover from one format to another is done at the touchscreen.”

In another part of Mueller’s sprawling plant, round portions of a special cheese called Harzer Kase, flowrapped in clear film, are robotically tray-packed on six tray packers that feed three robotic palletizers. Each tray packer is a Twin-Line Two-Axis model from A+F responsible for tasks similar to those accomplished by the case packer on the sliced cheese line. That is, it erects and glues corrugated trays, it collates primary packs, and it inserts primary packs into their secondary packaging. Once again, Elau servos and Elau’s PacDrive controller coordinate multiple axes of motion in a smooth and completely automated flow.

The Harzer Kase cheese—a soft cheese described in one cookbook as “pungent and stinky”—is round and resembles a doughnut. My tour of the Mueller plant took me to a tray-packer that was handling five-count flow-wrapped packs.

A key to the A+F tray packer is an elliptical track about 8’ long directly beneath the robotic pick head. On this track are mounted carriers that travel around the elliptical track on an intermittent-motion basis. The packs of cheese are conveyed into these carriers.

When seven packs are in a carrier, it advances to a position directly beneath the robotic pick head, whose end effector is equipped with two rows of suction cups. The end effector picks all seven packs from the carrier. It then waits for the next carrier to arrive so that it can pick another seven packs. Once both rows are gripped, it delivers them to a waiting tray.

Recently introduced by A+F, the Twin-Line robot is a departure from conventional robot technology, which typically provides a choice between heavy loads at a low cycle rate or light loads at a high cycle rate. The drive arms of the Twin-Line robot are made of lightweight carbon fiber and they’re driven by two servo motors. The robot is capable of pick-and-place motions of less than 0.5 sec and can handle loads up to 63 kg (139 lb) at a cycle time less than 2 sec.

As trays exit the tray packer, their bar codes are scanned. This determines which of the three robotic palletizers they are sent to. At each KUKA (www.kuka.com) robotic palletizer, an unusual end effector custom designed by A+F mechanically picks up filled corrugated trays and gently places them in stack layers on a pallet. The end effector also places a specially designed paperboard slip sheet between each layer.

The dexterity and precision of these robots is impressive. Corrugated tabs protruding from the tops of the trays must fit into slots in the bottom of the trays on the layer above. This allows air to circulate through the pallet during subsequent storage and distribution, which is essential because the cheese is still ripening. Without this ventilation provided by the protruding tabs, the ripening process would be inhibited.

Because the tabs must be inserted into their slots, there is no room for error when it comes to placing one layer on top of another. Accurate software programming, clever engineering in the design of the end effector and gripper technology, and the smooth reliability of the robot itself permit the gentle and accurate placement of these trays on top of each other.

Though it would be interesting to do a before-and-after comparison to contrast today’s operations with how packaging used to be done at the Leppersdorf plant before all the new automated systems were installed, such a comparison is not really possible. The plant is new and has never known a “before” status.

One thing seems clear, however. If the plant did not take advantage of automation to the extent it does, it would be difficult to process more than 4 million L of milk daily. 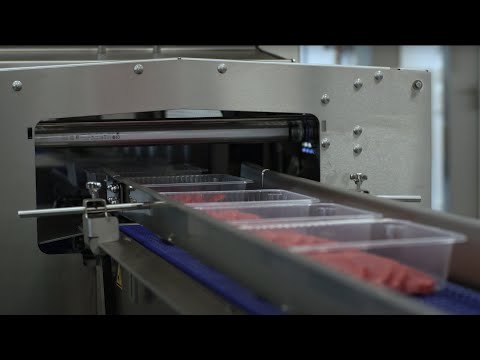 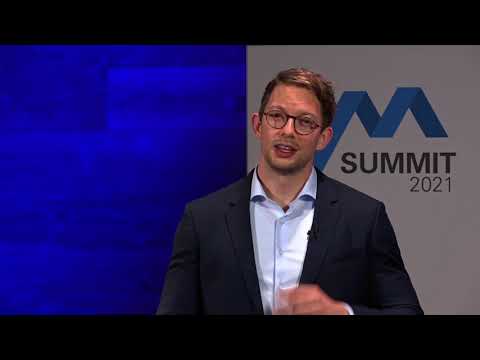 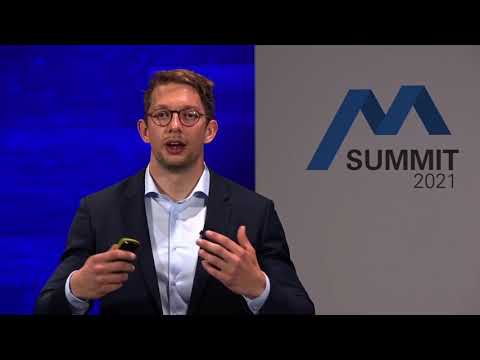 Remote Assistance for your MULTIVAC machines #5