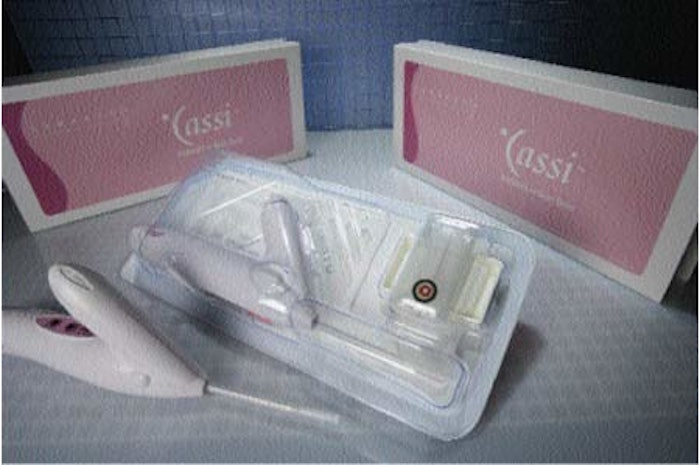 Glove fit. The new form-fitting (below) tray provides a tighter, closer fit for the breast biopsy device, and for a specimen.

The tray, which measures 15” x 6.5” x 2” deep, consists of two compartments: One for the biopsy device and the other for a sample tray used to hold the biopsy specimen. The device tray is heat-sealed with DuPont’s (www.dupont.com/packaging) 1073B Tyvek® lidding.

Sanarus Medical introduced the Cassi rotational core biopsy device in 2004. The device performs quickly and does not require setup time or capital equipment investment, which results in significant time and cost savings for physicians. A biopsy may be prescribed when the patient’s physician detects a breast lump or abnormality. The procedure involves taking tissue samples or cores from the suspicious area to determine if the lump is cancerous. When a suspicious breast lump is detected during a physician office visit, Cassi can be used to perform a biopsy immediately with only local anesthesia.

The device uses proprietary Stick Freeze Technology to deliver large, precise tissue samples with fewer passes. After being introduced into the breast lump or lesion, Cassi quickly immobilizes the lesion with a stick freeze that secures the targeted tissue to the biopsy needle. A cutting cannula rotates quickly over the needle to obtain the tissue sample.

Pleasanton, CA-based Sanarus Medical started to work on the packaging redesign in 2005. The original tray required internal padding and external foam caps for protection to pass shock and vibration shipping tests. The packaging configuration was not only costly and inefficient to assemble but also cumbersome for the customer to store, unpack, and dispose of the internal padding components.

Sanarus sought to streamline the packaging while preserving the integrity and sterility of the device during shipping.

The company began looking for a new thermoformer and awarded the packaging redesign project to Flexpak Corp. (www.flexpak.corp.com) based on the recommendation of Kent H. Landsberg Co. (www.landsberg.com). “When our engineers called on Sanarus, the company explained that the use of the internal padding and foam caps prevented the risk of any damage or cracking of the plastic tray during shipping,” explains Ed Berger, Flexpak’s vice president for business development. “We immediately recognized this issue from past experience. A phenomenon called birefringence was occurring in the thermoforming process under-taken by the previous vendor.”

Berger explains that birefringence refers to the areas of stress concentration contained in the original design due to imprecise process control. The cavity details did not contain smooth transitional changes between packaging features. These transitional areas were sudden and sharp, which can cause high internal stresses when impacted.

One of Sanarus Medical’s primary criteria for the new tray was the elimination of foam. “When we brought the original tray parts back to the shop, Mike Sorensen, one of our design engineers, diligently pursued designing a part that let the stress vectors flow out of the critical areas obviating any foam,” says Berger. To achieve this, Sorensen chose to “glove fit” the device.

According to David Densow, Sanarus Medical’s vice president of operations, the outer dimensions of the new tray were almost identical to the original tray. “The big change occurred internally to provide a much tighter, closer fit to hold the biopsy device in place,” he says. “We also added three additional snaps and improved the snap fit by placing them closer to the device.” This glove fit, as well as the smoother transitions between cavity features, allows any impact to be distributed evenly throughout the package instead of being concentrated in one area.

From design to production

The Cassi design required a tray and outer packaging configuration that was strong, cost-effective, and customer friendly. Flexpak turned to its supplier, Klöckner Pentaplast, to provide the material: Pentamed PETG MD 678/00, Blue Tint 5B/90EO. According to Berger, the 40-mil material used for the tray was chosen for its clarity, durability, toughness, and stability during sterilization.

Flexpak forms the trays on a Sencorp (www.sencorp-inc.com) 2500. The vacuum forming takes the film and changes it into a contoured shape that matches the Cassi. Flexpak achieves this contoured shape by simplifying geometry and blending features with increased draft, large radii, and chamfered features. Flexpak eliminated the gapping by designing the package in assembly mode using Pro/Engineer Wildfire 2.0 from Parametric Technology Corp. (www.ptc.com). “This allowed us the ability to design right off the Cassi surfaces,” says Sorensen, “thus creating the proper glove fit.”

The film rollstock unwinds to the Sencorp 2500 that heats the film material up to the proper forming temperature, drawing the heated material into the mold, sealing the plastic on the edges of the mold base, and removing air from within the mold cavity. A plug forcing the film down into the mold assists this process. When the mold opens, the material cools prior to entering the trimming station where it is die-cut, inspected, and sent to Sanarus for packaging.

At Sanarus, the trays are hand loaded with the Cassi device and sample tray. The preprinted Tyvek lidding, supplied by Kent H. Landsberg and converted by Amcor Flexibles (www.amcor.com), is heat-sealed to the tray in-house using a Model 2S1428 LV 1 from SCA Packaging (www.scapackaging.alloyd.com). The trays are then shipped to Sterigenics (www.sterigenics.com) for ethylene-oxide (EtO) sterilization.

By eliminating the use of foam, Sanarus was able to reduce material costs and labor expenses involved in assembling the packaging by approximately $2 per package. “That cost added up when shipping thousands of packages around the U.S.,” Berger says.

Sanarus is very pleased with the outcome. “The appearance of the tray is very clean and well designed,” says Densow. “Flexpak took the original design and made some major changes, which proved to be a winner.”