Arnie Orloski
Dec 31, 2004
Sobeys uses both white and black sensor pads for its high-priced meat cuts, depending on the color of the meat tray.

While the eyes of many in retailing are locked onto radio-frequency identification (RFID) labels for pallets and shipping cases, other retailers are working hard today to prevent store losses from theft, or “shrink.” And make no mistake, if RFID is a large investment, fighting theft at stores requires an investment as well.

“We have stores equipped with EAS [electronic article surveillance] in all our regions to some extent,” explains Ivan Baker, senior director of national security services for Sobeys, one of the few national grocery chains in Canada. With C$11 billion in sales, the Stellarton, NS-based company operates more than 1괌 stores and franchises in 10 Canadian provinces, under the Sobeys, IGA, and Price Chopper banners.

“We make decisions about electronic article surveillance more on a store-by-store basis,” Baker continues. “Usually, we equip those stores where the ‘shrink,’ or theft, is higher, or where shoplifting is more prevalent.” Sobeys uses the Sensormatic EAS system from ADT Security Services. The company employs a variety of ways to “tag” individual packages with Sensormatic theft-detection devices that can trigger an alarm if the tag is not deactivated at checkout. A number of products, particularly high-theft items like batteries and razor blades, come in tagged by the manufacturer. For other products, Sobeys workers apply pressure-sensitive tags that are bought in sheets from Sensormatic.

Meat is another story. Because it wanted to tag high-priced meat products at some stores, Sobeys buys and uses Cryovac® Dri-Loc® theft sensor pads from Sealed Air as the soaker pads underneath fresh meat cuts in store-wrapped products. These pads absorb meat juices in the package, but they also contain an Ultra-Max® sensor from ADT inside.

One final approach used on some packages involves the use of rolls of labels from KMA Global Solutions that have an Ultra-Max sensor applied to the adhesive side, where consumers are unable to see the sensor.

All together, Sobeys uses both overt and covert sensors on different products throughout its stores, all with the ability to trigger the theft alarm should a shoplifter try to leave the store without the sensor being disabled at the cash register.

“We’ve discovered that meat is a popular item for shoplifting, especially the premium-priced cuts like steaks and roasts,” Baker says. “Sometimes, it can be resold to restaurants and taverns, and we’ve found it can be traded for drugs, too. And, of course, some people take it for their own use.”

One of the problems with tagging meat is the moisture and temperature in the refrigerated meat case, he says. It can be difficult to get a tag to stick well to these packages, Baker tells Packaging World. “So getting a tag to stick to the package is a factor, and getting one that’s not noticeable is another goal,” he adds. Often, a simple stick-on tag can be peeled from the package and discarded.

Sobeys has been using the Cryovac sensor pads for more than a year, and Baker is pleased with the success he’s seen. “First, it’s a deterrent. A shoplifter can’t tell if it’s there, so he doesn’t know if one package is tagged or not. About the only way to get around the Dri-Loc sensor is if the would-be thief tries to remove the meat from the package. Believe it or not, we’ve seen people try that, too,” he points out.

Baker especially likes the fact that the meat department would have to use a soaker pad anyway, so there’s no extra labor cost in adding it to the package. But, of course, the cost of the pad is higher, so Sobeys’ security people ask the managers to use it only for a percentage of high-priced meat packages. “By using the tag inside the package, a potential thief doesn’t know which packages are tagged and which might not be tagged.”

Although the company declines to reveal its numbers of thefts averted, Baker says there is anecdotal evidence that the device works.

“We’ve had occasions where people try to leave the store with a hand basket full of fresh meat packages, and one or more devices will set off the alarm,” says Baker. “In fact, in some stores we even tag some of the baskets.”

Sobeys is no different from supermarkets in the United States when it comes to thin profit margins. And tagging products in the stores does add to costs. But, Baker points out, “anything we lose out of our meat case to theft is bottom-line dollars lost. So if you can prevent the loss in the first place, you’re way ahead.”

Corine Riddell is loss prevention coordinator for Sobeys Ontario, where the company has the largest number of stores, 135, equipped with EAS. “There are certain meat products where we ask managers to tag every package with the sensor pad,” she says. “T-bone steaks are a high-theft item, so we want the sensor pad in every pack. But it’s really up to the store and department manager, because we don’t want to overuse the sensor pads, either.”

She tells about an incident that happened the previous week: “We had a ‘walk-out’ customer with several meat packages in a basket,” she reports. “The alarm was tripped and our manager was able to intercept the customer as he got into a taxi. So we were able to retrieve the meat packages.”

Riddell believes that EAS and the alarm are a deterrent about 80% of the time. “So long as our employees address the alarm and approach the customer in a customer-friendly way, 80% of those people who trigger the alarm won’t return,” she says. “They’ll find an easier target.”

Riddell says that more and more products are coming into the stores with tags applied by manufacturers. It’s especially true for those stores that have pharmacies and personal care products. Condoms, high-end dental-care products, DVDs, and a variety of other products, including bags of cooked shrimp, are source-tagged.

In addition, stores have two other ways to add tags to packages at store level, as shelves are being stocked. The overt-type tags, the Sensormatic DRS1 self-adhesive sensors, are used for a variety of packaging, largely those in health and beauty aids and products called general merchandise, that include kitchen supplies, pet care products, and insect repellent. But it is also used for grocery products like instant coffee and baby formula packages.

For some meat, seafood, and deli products, Sobeys uses the covert printed polyester labels because the adhesive on the label bonds well even to packages merchandised in cold temperatures or with moisture present. The label, in rolls of 500, is an oval-shaped 2-mil polyester on which KMA Global prints Sobeys’ signature green color with the words, “Quality Guarantee.” The printing is done flexo in one color. KMA also affixes the sensor to the adhesive side of the polyester.

“This label uses a special adhesive formulated for low-temperature applications,” says Allan White of KMA Global Solutions. “It was formulated specifically for frozen foods, but it bonds well to room-temperature or medium-temperature products like fresh meat packaging.” Developed just about a year ago, the adhesive bonds well, he says, so long as any surface moisture is removed before application.

Along with frozen foods, Riddell says these labels are also used on deli packages worth more than C$5, and for bars of cheese. The sheet DRS1 labels just didn’t bond well to these refrigerated packages, Riddell says. “This label isn’t perfect, but it’s a big improvement over any other label we’ve tried.” Not only does the covert printed label bond well to these packages, it has a psychological advantage, too.

“Because our label disguises the sensor, we think it’s more customer-friendly,” says White. “We believe that if a deli worker bags an order and then slaps a sensor label on it, some shoppers may find it offensive, indicating a lack of trust. So our label not only gets away from the exposure of the sensor from a security point of view, we also think it aids in a customer-appreciation perspective.”

This label is also being used in Sobeys’ Price Chopper stores, where a high percentage of meats are furnished case-ready, Riddell says. Sobeys has been trying to develop a way its suppliers can source-tag these prepackaged meats, but the sensor tag must be applied downstream of the metal detector, Baker says.

Riddell says that Sobeys has found an applicator that could place the overt label on the meat package immediately before the price and UPC label covered it. “We think it would work even on high-speed packaging equipment,” she says. However, Baker says the meat suppliers have been reluctant to add more complexity to their lines.

“In Ontario, we basically have all our Sobeys and Price Chopper stores equipped with EAS,” says Riddell. “We focused first on our metro Toronto stores, then moved out to the cottage country, more rural locations where people vacation. We tell our people that EAS is just one tool to help us reduce shrink. We’ve found that if it’s used and used properly, it does work.” 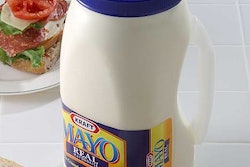 Twenty-one professional and six student winners were selected as recipients of the AmeriStar Award, a design competition in the packaging industry, produced by the Institute of Packaging Professionals (IoPP).