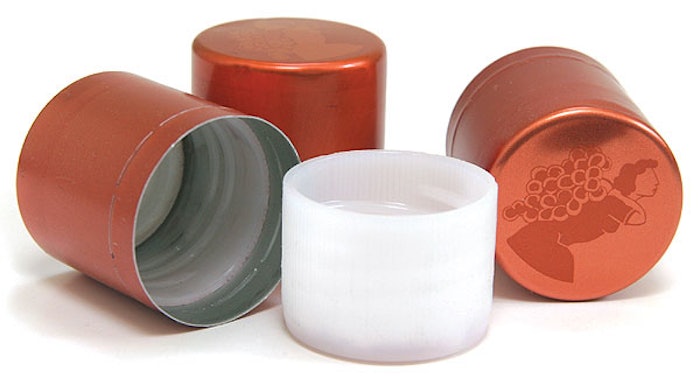 This closure, called torqued-on, pilfer-proof, is an adaptation of closures used for high-end spirits.

The wine varieties aren’t new, but just about everything about the package is at R.H. Phillips, Esparto, CA. Beginning in June, the winery began offering its R.H. Phillips’ 2003 vintage Chardonnay and Sauvignon Blanc and its 2002 vintage of Cabernet Sauvignon, Merlot, and Shiraz in a new high-shoulder glass bottle, designed by Phillips’ owner, John Giguiere, with the help of glassmaker Gallo Glass. A new slim front label from Landmark Label coordinates with the Phillips’ logo that’s molded into the shoulder of the glass bottle.

This is the first wine use of an unusual torqued-on pilfer-proof screw cap with its straight-sided capsule. Made by Global Cap in England, Phillips purchases the closures through distributor APMGlobal.

The winery is using a new CAS/8/8/360 Twin-Turret capper from Fowler Products that torques on the closure in one turret, then crimps the capsule under a bead in the second turret for a TE breakaway band. The plant also retrofitted its existing labeler with a special lug spotter so the label is applied in precise position each time.

As with other wineries using closures other than cork, Phillips primary motivation is the elimination of TCA, or cork taint, that is said to affect between 2% to 6% of all cork-finished bottles of wine. Some wineries have switched to roll-on pilfer-proof (ROPP) aluminum caps, others to synthetic corks.

“Our wines are estate-grown, handled with care in our estate winery and beautifully packaged as our seal of quality,” says John Giguiere. “And then we compromise it with cork taint. That doesn’t make sense to me.” Cork taint allows air into the bottle and can oxidize the wine, drastically changing its bouquet and flavor.

“John was really interested in finding a screw cap that was a little different, one that didn’t look like a conventional roll-on aluminum cap that showed the threads,” says Lane Giguiere, co-owner of the vineyard.

The style of closure has been successfully used in the distilled spirits industry for well-known premium brands such as Cointreau and Tia Maria liqueurs. John Giguiere worked closely with Global Cap to create this version. The capsule top is lined with Saranex for its barrier properties.

The closure is essentially an injection-molded threaded sleeve that’s bonded to an aluminum capsule with adhesive. Within the first turret of the twin-turret capper, the cap is torqued onto the bottle with about 25 psi. Then, in the second eight-head turret, the capsule is perforated and crimped down over a glass bead to provide the tamper evidence.

The capsule measures 31.5 mm in diameter and 35 mm in length. “Global Cap had to customize one of its assembly lines to make the short capsule,” says Ken Lazzeroni, plant manager at R.H. Phillips. “The company had to modify equipment to accommodate the dimensions of our capsule. And the company worked closely with Fowler’s sister company, Zalkin, to make the heads for our capper.”

For now, Phillips will market the wine at the same suggested $9/bottle price as before. Although the company didn’t test the new closure, it has experience with screw caps. Phillips distributes in the United States a wine from New Zealand under the Kim Crawford brand, all of which is finished with a ROPP cap.

“The sales of that brand have been phenomenal,” says Lane Giguiere, “and consumers have embraced the screw cap. We’ve had almost no resistance to that closure, especially when people taste the wine.”

She believes the industry is ready for screw caps. “The reaction to our announcement has been amazing. We’ve had a great reaction from retailers, restaurateurs, and wholesalers. The industry and trade are ready, but we do need to do some consumer education.”

Much like other wineries that have changed, Phillips will use its packaging to help inform consumers about the change. The first sentence on the back label will explain its commitment to fine wine, and why the screw cap helps to ensure that. Plus, Lane says, the first 100ꯠ cases of wine will feature bottles with a neck hanger showing a cork with a band of paper printed with a teaser to encourage the consumer to open the paper and read about the change. Point-of-sale materials and shelf talkers will also be employed.

The winery is also developing a DVD about screw caps that will include the history of closures for wine, interviews with winemakers, wine writers, and retailers that will extol the virtues of screw cap closures.

Because the bottle no longer needs a long neck to hold the cork, the new bottle design has a shorter neck and higher shoulders in both the red- and white-wine versions. And each sports a deep “punt” or recessed base.

“We wanted to design a bottle that would showcase the new screw cap,” John Giguiere says, “and make sure people noticed that this was not another cork substitute, but something completely different.” Because of the high-shoulder design, Lane adds, it presents the illusion of being tall and slim. But she says the bottle really has almost the same diameter as the previous bottle, and it’s just “a smidge” taller, not enough to prevent it from being stocked on conventional shelves.

Now that Gallo Glass is a separate company from the winery, the Giguieres didn’t see a competitive problem with buying from it. And Lane adds that Gallo Glass was great to work with; Ken Lazzeroni says the same.

“The molds are totally unique to our company,” Lazzeroni points out. “This thread pattern has never been used in the wine business before.” He’s also confident that the new capper will have a quick start-up.

In addition, the plant retrofitted its Imprestix labeler from Tapp Technologies with a lug spotter so that the front and back labels can be applied in precise registration with the Phillips’ logo embossed into the glass. However, the lug spotter can be easily removed with a single bolt, when the winery is packing conventional bottles.

The new label is a 60# matte-finished paper that’s embossed on the face, according to Landmark Label. The label is printed on a 10-station flexo press to a design developed by Derek Lanier, a designer at Phillips. Landmark will use four-color process plus four spot colors on the face label, plus three varnishes. The back label is five colors. The converter will combine some colors so that it can do all colors and varnishes in a single pass on the press.

“This is the first time Phillips is going without a laminated label,” says Landmark’s Jeanne Diascenti, “so we want to make sure we give them sufficient protection.”

There’s another advantage to this package, according to Lazzeroni. “This closure comes off with about a three-quarters turn,” he says. “ROPP caps usually require more than a full turn to remove the cap. This is one of the reasons we think this bottle will be well received by restaurants where they serve wine by the glass. It’s very user-friendly.”

Originally, some 300ꯠ cases of the R.H. Phillips brand will be filled into the new package. This fall, the winery plans to do a 50ꯠ-case trial run for its Toasted Head label in the bottle and closure. Later, the winery may shift its production of Hogue Cellars wine from Washington state to the new package.