Wilkinson Manufacturing Co. is the first North American converter to thermoform containers from corn-based polylactide polymer, or PLA. The converter welcomes the material’s sustainable, renewable characteristics, and its consumer-friendly properties. 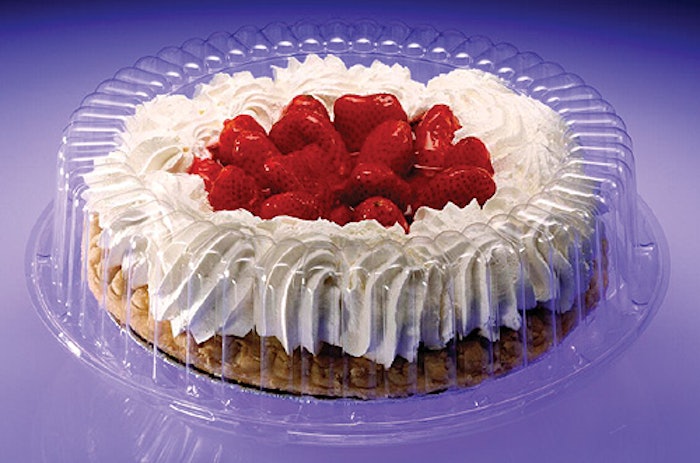 Thermoformed from corn-based polylactide polymer, or PLA, these clear containers show examples of some of the carry-out products

When it produced the initial aluminum TV dinner trays for Swanson Frozen Foods a half-century ago, Wilkinson Manufacturing prided itself as a pioneer. It still does. The Fort Calhoun, NE, company remains a leader today, as evidenced by its becoming the first North American company to make thermoformed food containers from corn-based polylactide polymer, or PLA.

“We think it’s significant that we’re the first North American company to use PLA,” asserts Wilkinson president Robert Dalziel. “We were a leader back in 1952 with the Swanson trays, and while we’re not as large as some of our competitors, we’ve always tried to stay on the [cutting] edge of things. We see [the use of PLA] as another example of that.”

As this issue of Packaging World went to press, Wilkinson was beginning to market containers made from PLA to potential grocery store customers for cakes, pies, cookies, cut fruits and vegetables, and party trays sold in deli and bakery departments. Dalziel estimates that container thicknesses will range from 10 mils to 30 mils, with cake containers measuring 8” to 10” in diameter and up to 5” high. The converter will market containers under its own trademarked name, NaturesPLAstic, and Cargill Dow’s NatureWorks™ PLA.

“We’ve been testing the material for a little over eight months now, using a third party to test the characteristics of the material,” explains Joe Selzer, Wilkinson’s vice president of marketing and sales. “We’re finding that the PLA material has a clarity equal to OPS and equal to or better than PET. We’re going to market the material against PET more than OPS.”

That tack makes sense because Wilkinson does not make PET containers. The company considers itself a leading manufacturer of aluminum and OPS food containers for both foodservice and retail markets.

PLA presented an intriguing alternative for Wilkinson, who saw it as a competitive material to PET, whose market growth is strong. “We heard about the PLA [production] plant going up about two years ago,” says Selzer. “It’s located about eight miles down the road from us, so we contacted them. We thought we would have an advantage being so close, and that they’d [Cargill Dow] want to work with us first.”

Dalziel says, “We can make containers out of material that we don’t have to source from a foreign country. And the concept of using a sustainable, renewable packaging material is unique, and that’s exciting for us. It has some compostable characteristics that have an environmental plus. And the material uses less energy to make [than OPS] because we can use lower temperatures during the manufacturing process. We thought if PLA works property-wise, it has to be the wave of the future.”

Of course, Wilkinson knows it won’t be easy. For now, third-party testing continues to determine the material’s ability to withstand temperature extremes. Strength, flavor- and aroma-barrier properties are also being analyzed.

Another challenge lies in manufacturing the container bases and lids. “PLA is a different animal for sure,” admits Dalziel. “We run it on the same equipment that we do our OPS material, but we’ve had to significantly modify our extrusion line to run it. On the thermoforming side, because the material has different characteristics than OPS, we’re making modifications on that machinery as well. Again, the changes are significant, but we should point out that we don’t need to buy new equipment to run it. So there are both mechanical and process changes, but because we’re developing this before anyone else, we consider specific details proprietary.”

PLA has been used successfully for about a year by the Italian grocery chain IPER (see Packworld.com/go/c069). Unlike IPER and Wilkinson, Sony Pacific has used PLA for a blister pack for electronic products such as mini audio discs and portable radios (see Packworld.com/ go/c070).

Assessing Wilkinson’s plans for using PLA, Selzer notes that “as a new item, PLA is more expensive,” compared to OPS and PET. “But we think there’s a market for people concerned with sustainability, the environment, and dependence on foreign suppliers. We think people are willing to pay a little more for these types of things. We intend to eventually sell containers of PLA throughout North America,” he concludes.