The detail that went into the bottle for Loctite Professional Wood Worx glue is like that for a well-crafted piece of furniture.

Introduced in the United States in August, the 13.5-oz (400-ml) bottle of glue features what Henkel Consumer Adhesives, Avon, OH, refers to as the Easy Flow System. It centers on three innovations:

• A low-density polyethylene bottle blow molded with one flat side to prevent it from rolling around; the bottle is intended to be kept horizontal during use.

• A closure containing a cavity molded in the top as a place to store the nozzle cap during use.

• A nozzle molded off-center and torqued closed so it aligns with the flat panel. This maximizes the package design’s effectiveness so the glue is always ready to dispense.

Spotted at the National Hardware Show in August, Wood Worx adapts a bottle that debuted in Home Depots and other locations in Canada in October 2001. That bottle won a NACD award (see packworld.com/go/w056) for Richards Packaging, (Mississauga, Ontario, Canada), which also molds this one. Henkel declines to identify any other packaging suppliers involved.

The flat panel widens from the base to the shoulder and is textured for easier gripping. The bottle is round at the base and includes a lug for label orientation. The angled pressure-sensitive label abuts perfectly up the tapered flat side on both edges to leave the flat panel uncovered.

Due to the bottle’s odd shape, Jackson reports that the company needed to install new equipment at its operations in Brampton, Canada, to fill, label, and cap the bottles. The 13.5-oz bottle sells in the U.S. at outlets such as Wal-Mart for $3.99. —RL 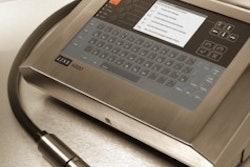 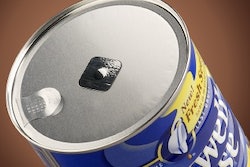 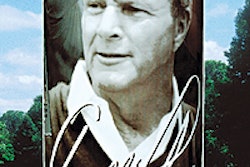 Have a drink with Arnold Palmer