Available for several months, the rocket-shaped bottle represents quite a departure from its ubiquitous cylindrical predecessor. The new white high-density polyethylene bottle includes a friction-fitting base cup molded of blue that closely matches a full-body sleeve label’s deep blue color. Near the bottom of the clear pressure-sensitive label on the cup is printed copy that directs the consumer to “Pull Cup Down to Open,” along with a direction arrow. The removable cup contains product literature and can be used to store the consumer’s contact lens case. The sleeve label is conveniently perforated over and around the top closure for easy removal, with a graphic indicator assisting the consumer. The sleeve remains intact when the base cup is removed, and when the top of the tamper-evident sleeve is removed to reveal a flip-top closure. The repackaging offers several value-added features over the previous bottle, including a striking shape and bold color, the removable base cup, and a hinged polypropylene closure with tiny orifice that yields a focused stream of solution when the bottle is squeezed. The previous HDPE bottle included a label and separate screw cap, which was then packaged in a paperboard carton. The new version is sold sans carton, which likely defrays part of the new package’s higher primary packaging costs. At press time, calls to Allergan’s product manager aimed at acquiring packaging specifications were not returned. Packaging World purchased the bottle at a Chicago-area mass merchandiser for $6.29. 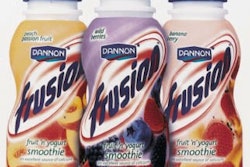 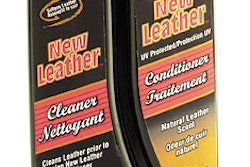 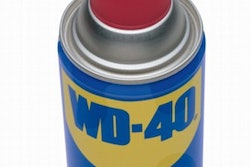