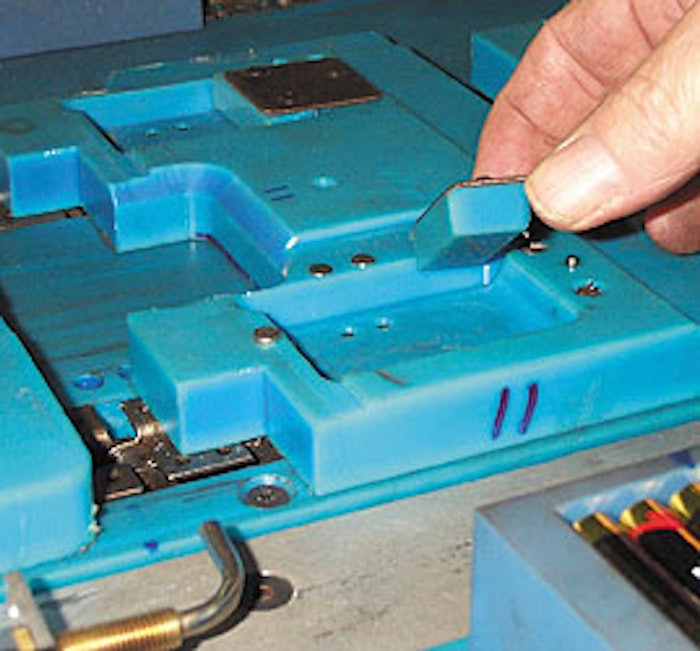 Rayovac has custom designed tool-less changeover into two major aspects of its lines, one at the battery infeed, the other at the clamshell infeed, to greatly reduce changeover times. On the battery infeeds of the AA and AAA lines, cast nylon carriers from Southwest Machine and Tool (Avoca, WI) are sized to the specific battery count, four, five or six, corresponding to each layer of the eight-ᄺ- and 12-count packs. While a carrier holds six of the batteries, molded plastic inserts sized for either four or five batteries can be set into the plastic carrier (see photo below). A small metal plate atop the insert matches up to magnets embedded in the base carrier to secure the insert. Also helping keep the inserts in place are holes that align with pegs in the carriers. Used for the first time on the new AA line, the idea originated with senior project engineer Kenneth Tippery. Before, all the battery holders had to be switched out. It was a task he says that took a mechanic an hour to perform. “Now, the machine can be changed over in 20 minutes by an operator,” Tippery reports.

Leveraging changeovers On the clamshell side on the AA line, Rayovac uses a lever-and-peg system to shift a frame on the aluminum holders to size them for eight, 10- or 12-count clamshells. To change over each eight-across clamshell carrier, a lever is locked down onto a metal bolt (see photo below). Tippery says there are 51 clamshell carriers. “Before, all carriers had to be removed and replaced, and that took a mechanic an hour to do,” explains Tippery. “Now, it takes a total of five to ten minutes, and it doesn’t require a mechanic.” Tippery credits Algus with the design idea, used for the first time at Rayovac on the AA line. “We told them we wanted to change over without having to screw or unscrew anything, and this is what they came up with,” he says. “It’s a very good idea.” On any given week, Rayovac runs the lines for two or three shifts and may make two or three changeovers. However, that number will increase as a result of Rayovac’s late ‘00 introduction of a low-profile, one-layer six-pack configuration set to run on both lines. This configuration was developed at Wal-Mart’s request. Rayovac was also adapting the six-pack to its own lineup. Tippery believes this is an indication that more changeovers are ahead. “As we go along, we’ll probably incorporate more changeovers as we create additional packs,” he says. When that happens, Rayovac is already well-equipped.

See the main story that goes with this sidebar: Rayovac charges up battery lines