New clamshell packs for smoke and gas detectors went through many versions, but samples were available in time for the buying season. Now the consumer-oriented packs are filling the retail pipeline. 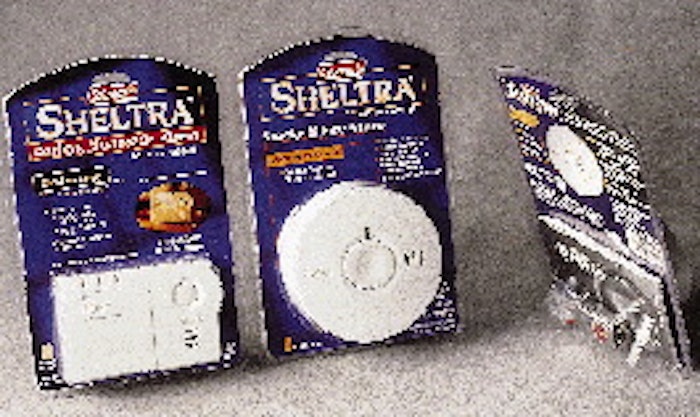 3Commonality2 is one of the features of Coleman1s packages for both smoke alarms and carbon monoxide detectors. Package size an

That Coleman Safety & Security Products introduced new packaging for a new line of home smoke and gas detectors at a National Hardware Show isn't unusual. But the path the packaging took from concept to finished samples was kind of rocky. Now that the new packs are in full production, the bumps in the road are all but forgotten.

The project began when Wichita, KS-based Coleman, a well-known maker of recreation and camping gear, acquired a company that made smoke and CO2 detectors. The renamed Coleman Safety & Security Products, Downers Grove, IL, began to look at ways to improve the folding cartons that the previous company used. Samples had to be available in a short period of time to meet the hardware and home center buying cycle.

When the redesign was completed, Coleman introduced its Sheltra line of detectors in two-piece thermoformed clamshells, custom-designed and produced by Innovative Plastech (Batavia, IL). The product identification and merchandising information is carried by a card with graphics designed by Source, Inc. (Chicago, IL).

After Coleman performed some research, it discovered that consumers wanted packaging that would simplify the selection of these home safety products, says Laura Mueller, a marketing communications specialist at Coleman. When it evaluated the packaging of competitors, it seized two opportunities. One was that few detectors were sold in transparent packages allowing consumers to see the product. The second was the graphic approach.

Competing packs depended heavily on red and black colors, denoting fire and smoke. "We wanted to do the opposite, use graphics that were comforting while informative and easy to understand," she says. Coleman turned to Source, a design firm with which it had experience. It created what Mueller calls "a feeling of comfort" through colors like Sheltra blue and a series of icons that are used to help consumers select the product most appropriate for them.

Still, Mueller says, some retailers prefer the paperboard boxes, so the clamshell packs are augmented by boxes with good visibility of the product. "Our packaging is not model dependent, it's customer dependent. That, too, is new to this category."

Because it needed samples quickly, Coleman turned to Innovative Plastech, another supplier it had worked with in the past. What complicated the package design process was that the products were being redesigned at the same time as the package!

"The whole product and package concept evolved quite radically from the early days-and quickly too," recalls Ted Kushnerowicz, a Coleman purchasing agent. "The final package didn't look anything like the initial design."

One difficulty is that Coleman wanted to package all of its smoke detectors in the same clamshell design. In other words, one package for seven different product varieties, all of which were still being developed.

To develop a common design, Innovative had to create a cavity in the back of the clamshell that would hold a battery for one model, an AC/DC adapter for another, a wire harness for yet another model. This, says Randy Canlas, who heads packaging for Coleman S&S Products, was one of the unique aspects of the program. In the end, Coleman has three clamshells, one for seven models of smoke detectors, one each for two models of the CO2 detectors (their shapes are so radically different they required different cavities).

And, adds Kushnerowicz, the company "wanted to maintain the same look not only in smoke detectors but also in the CO2 detectors. The outside appearance is very consistent, even if the printing and the package shapes for the CO2 detectors vary."

If product design was under continuous revising, packaging had to be flexible to accommodate the product changes. Although the project had established timelines for each phase, both product and package criteria were "fluid." In the end, the responsiveness of Innovative Plastech and its ability to create first prototype then production tooling on a round-the-clock basis brought the project in on schedule.

"For a project of this nature with its very tight deadlines, Innovative accommodated us very well," says Kushnerowicz. "They put in a lot of extra hours and did an excellent job. We're very satisfied with the results."

Testing proved that a 15-mil polyvinyl chloride could be thermoformed into the most efficient clamshell for Coleman. While that's used for the domestic market, "We'll be using a PETG material for the Sheltra clamshells we produce for the international market," says Canlas. "We needed to look at that material because there are some constraints on certain materials in some European markets. We know that where recycling is a major issue, PET or PETG is still a preferred material there."

The clamshell packs were delivered in mid-'96 to the manufacturing plant in Chihuahua, Mexico, where Coleman S&S Products are made. Shipments in the new packages began for the 1997 selling season.

Although Coleman declines to identify its source for the trays, it uses an oyster white B-flute corrugated that's printed in the Sheltra blue to pack the clamshells. It's covered by a half-slotted cover that pulls off the tray for easy display of trays, says Canlas.

Overall, the reaction has been excellent, especially after Coleman developed a pioneering merchandising program with retailer Home Depot. However, there is almost no way to know exactly why the new product has been received so well. Is it the new Coleman brand? The newly designed products themselves? The new primary clamshell packaging? More product promotion? Better secondary packaging for displays? Or perhaps some combination of all of these.

Still, says Randy Canlas, "The thermoformer worked above and beyond what a normal supplier can be expected to do. They understood the timelines we needed to meet, and they performed well under a lot of pressure."

Hiperbaric teamed up with Petainer, putting its One Way PET Keg under pressure to enable the cold-pressed juice market to take advantage of keg dispensing.
Aaron Hand
Oct 4th, 2021
More in Materials & containers