Beverage packers have enjoyed the benefits of lightweight D&I two-piece cans for years. This company is out to prove that aerosol cans can be similarly fashioned. 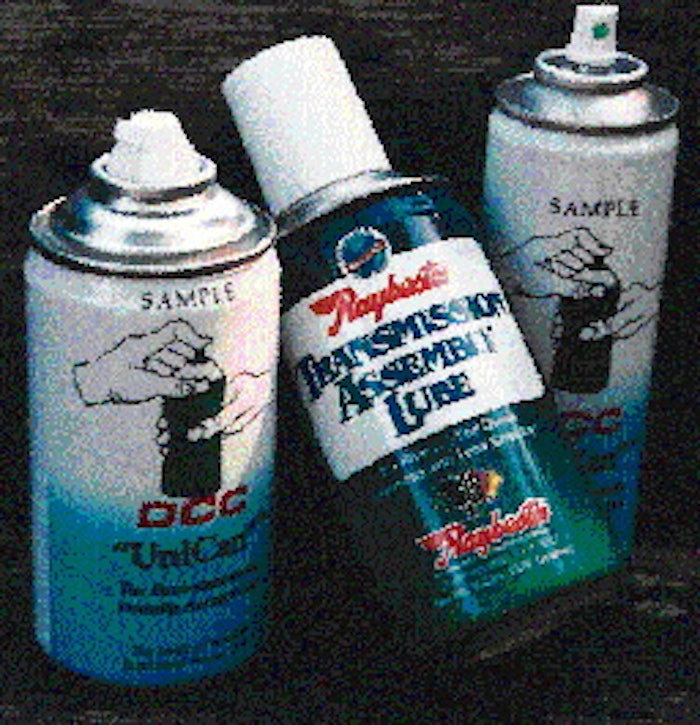 Raybestos Aftermarket Products Co. is the first to commercialize a new breed of aerosol can. The Crawfordsville, IN, firm is selling its 8-oz transmission assembly lubricant in a seamless two-piece drawn-and-ironed (D&I) tinplate steel can developed by Dispensing Containers Corp. (Glen Gardner, NJ). "We considered a more conventional three-piece welded can, but then we felt if we're going to introduce a new product, why not put it in a brand new kind of aerosol container?" says Raybestos general manager Frank Slocum. Typically aerosol cans are three-piece welded steel or impact-extruded aluminum. DCC saw disadvantages in both these can types, and so it sought an alternative, says CEO George Diamond, who described his can system in a May 9 paper at Metpack 96 in Essen, Germany. The downside to the three-piece welded can is its weight, says Diamond. "If you use material thinner than six or seven thousandths of an inch, it can burn through under welding conditions," says Diamond. Also, can sidewall must be a uniform thickness from top to bottom because it's made from a flat sheet of material that's rolled and welded. In a D&I can, manufacturing begins with material having uniform thickness, say .012". After cupping and ironing, the can bottom, where the ability to withstand internal pressures is most critical, retains virtually the same thickness. But the sidewalls can be thinned during ironing, to .0045" in the case of the Raybestos can. And near the top, where necking and flanging require a little heavier material, the thickness can again be controlled; in the Raybestos can, it's .007". The ability to distribute material as needed paves the way to lightweighting. The 211/413 Raybestos can, with its sidewall thickness of .0045", weighs 47.7 g. A comparable three-piece welded can, says DCC, weighs 74.7 g. That makes the D&I can more environmentally favorable. It scores additional "green" points because it consumes 30 to 50% less energy from cradle to grave than three-piece welded cans, says Diamond. The light weight of the can also yields material cost savings. According to Diamond, the Raybestos can in a three-piece welded steel format would cost about 13¢. "Ours is about eleven cents," says Diamond. The price advantage is even more noticeable when DCC's two-piece steel can is compared to an impact-extrusion aluminum can. This would cost, says Diamond, in the neighborhood of 24¢. To draw even more attention to its container of transmission lube, even though it's not a retail item, Raybestos clads it in a striking shrink-sleeve label from American Fuji Seal (Bardstown, KY). The 2-mil polyvinyl-chloride label is gravure printed in five colors. "Distributors of aftermarket products like this have a 'will call' or walk-up counter where local auto repair shops can pick up orders," says Slocum. "That's where the graphics come in. A guy's going to notice this can, and he's likely to want to try it at least once." There's a good chance he'll repeat his purchase, too, because competing products are all packaged in tubs into which transmission technicians dip their fingers. This introduces contamination, which isn't good for a car's transmission. Such contamination is just about impossible with the fully sealed Raybestos can. Currently the Raybestos can is filled by DCC. A piston-style aerosol can, it takes a standard seamed-on steel dome and an equally conventional crimped-on valve. The cavity beneath the piston is pressurized with nitrogen to between 100 and 110 psi, so when the valve is opened, the piston pushes up and causes the viscous product to be dispensed in an 1/8" bead. Raybestos' Slocum is so pleased with early reaction to the new can, which was introduced last December, that he plans to launch a wheel bearing grease in it soon. Other similar products are in the works, too, he says.