No matter what your product, you probably have, or will, profit by some packaging development that first made its debut in the beverage packaging sector.

Beverages are, arguably, the single largest market for containers and packaging, and few packaging developers can afford to ignore it. Technology battles fought and won in the beverage fields have a habit of paying dividends elsewhere. Here are three of the newest weapons from the beverage front: Until well into the 1960s, almost all beer and beverages were bottled in glass. Then canmakers snatched a piece of the market with a beverage can fitted with a conical lid and topped off with a metal crown. Cone tops drank like bottles and were one of the first serious challengers to the dominance of glass beverage bottles. Flat-top easy-opening ends eventually replaced the cone tops. From the beverage market, easy-opening pour spouts and full-panel pull tops spread to canned products broadly. Meanwhile, the beverage packaging wars were heating up with the debut of polyethylene terephthalate (PET) bottles as replacements for "family size" glass soft drink bottles (32 oz and more). Then PET soft drink bottles began to appear in even smaller sizes-1.5-L, 1-L, 20-oz, 1/2-L liter and 12-oz. A two-pronged argument PET promoters use is that bottles are easier to drink from than cans, and they can be reclosed for sip-on-the-run consumption. Not willing to stand still for that kind of talk, the folks at Ball Corp. (Muncie, IN) have now developed a "Touch Top" aluminum lid for beverage cans. The easy-to-drink-from and potentially recloseable lid marks the return of the cone-top concept. Only this time the top is a one-piece structure that looks more like a volcano than a cone. Rising 1/4" to 3/8" above its 202 diameter, Touch Top incorporates a single 3/4" scored "push-in" hinged disc in its crater that serves as the drinking and pouring spout. The panel is formed and slightly recessed beneath a triple-fold design that keeps sharp metal edges from touching the consumer's finger. An end assembly module is expected to be ready for production by mid-'95 at Ball's Findlay, OH, plant. It will be used first with a conventional shell press, although eventually a single press could make the lid. Less aluminum is used in the end, and Ball believes an alloy cheaper than 5182 could be used. For Europe and elsewhere, the design is adaptable to steel. Down the road, Touch Tops with higher volcanoes will have beaded craters to accommodate reclosing devices. The cone-top look will be complete when future generation Touch Tops rising from bases as small as 108 are double seamed onto necked-in 211 can bodies. Coca-Cola Co. (Atlanta, GA), in its quest for distinctive packages that set it apart from other soft drinks, is reportedly conducting focus group evaluations of the new lid. Early evaluations find drinking from Touch Top "different" from retained-tab ends, but not necessarily better or worse, says Ball. Precision Valve Corp. (Yonkers, NY) made a name for itself in the aerosol business. Now Precision is introducing itself to the soft drink business with a new 28-mm high-density polyethylene closure that was developed by its Australian operation. The cap has a one-piece, linerless design said to be cheaper and easier to apply than the lined polypropylene closures now used for carbonated soft drinks. Instead of a separate liner, Precision's closure features an annular rib that drops from its ceiling, turns in and folds back on itself as it's seated. Precision doesn't plan to get into the U.S. beverage closure business directly. Rather, it wants to license its technology to vertically integrated beverage producers. Pepsi, which has tested the cap in Australia, is likely to try the cap here. 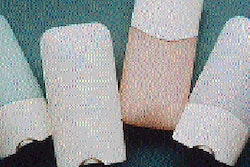 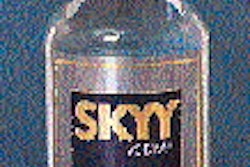 Skyy gets it right