Berry Plastics used PACK EXPO International as a springboard to launch Entour™, a new line of pouch packaging solutions said to offer all the functionality and performance of traditional laminated pouches without limiting recyclability. 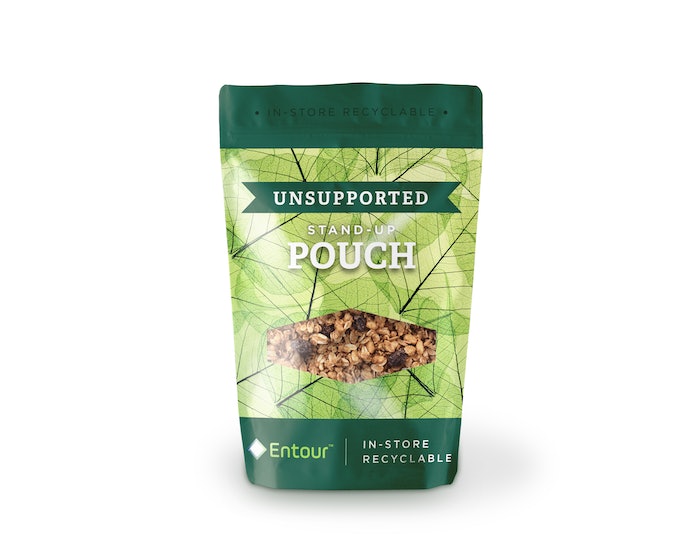 Three distinct performance options will be available: non-barrier, moisture barrier, and moisture/oxygen barrier. This means the pouches can be used for a range of products, including baking mixes, granola, snacks, confections, rice, pasta, and other baked or dry contents. All of the pouches are made from blown-film coextruded substrates produced by Berry Plastics, some of them having up to nine layers.

According to Paul Wolak, Senior Director of Product Development at Berry Plastics, "The key piece of this technology is being able to bring both moisture barrier and oxygen barrier to a stand-up pouch yet still wind up with a pouch that can go into the polyethylene recycle stream. We've brought some pretty unique technology to bear, and we're running these films on our newest coextrusion assets, which gives us precise layer control, precise blend control, and really precise gauge control."

Wolak prefers not to identify precisely what the layers are in the version of the pouch that has both moisture and oxygen barriers, other than to say that polyethylenes are the key. "If you think about a barrier standup pouch, it needs heat resistance, so we bring in HDPE for that purpose. It also needs to be tough and durable, so we bring in some of the LLDPE for that requirement. And then there's the high-speed pouch-making and pouch-sealing machinery, which operates at a fairly low melting point, so we've had to enhance sealing layers accordingly. Only by doing a lot of homework, by bringing in our material scientists, and by partnering with some key resin suppliers have we been able to get this right."

Wolak also says that where oxygen barrier is concerned, EVOH is part of the picture. "But the proprietary piece," he adds, "involves how we were able to modify the structure to allow EVOH to be used yet still keep the finished pouch suitable for inclusion in the basic PE recycle stream. Without some of the material science technologies we've employed, EVOH becomes a contaminant in that recycle stream."

Wolak acknowledges that the only way for these pouches to actually make their way into the recycle stream is if consumers recycle them at one of the more than 18,000 drop-offs available nationwide. In order to assist consumers, Consumer Packaged Goods companies should use on-pack messaging to educate consumers that PE films should be returned to retail with their shopping bags and other PE films rather than recycled curbside. He believes that as consumers grow increasingly concerned about just what a package's end of life should be, CPG companies will find packaging concepts like this increasingly attractive.