Mixing into the marketplace 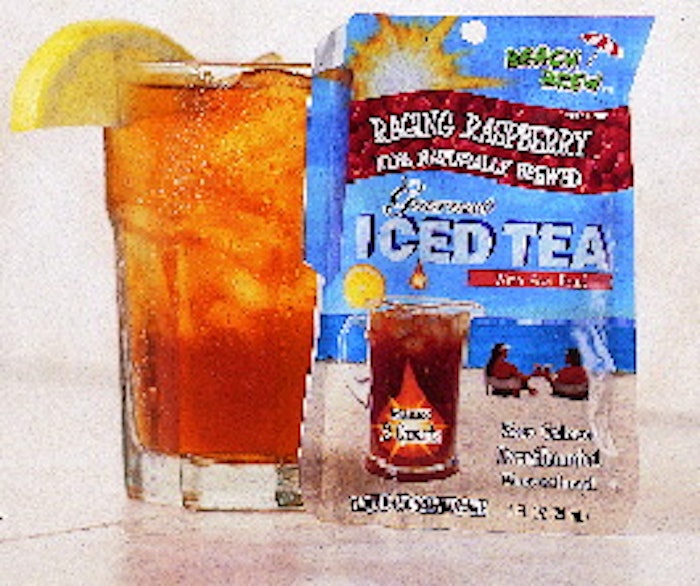 "It's the only package we know of with this type of shape for a liquid concentrate on retail shelves," says Frank Igo, CEO for the San Diego, CA-based company. Beach Brew Gourmet Iced Tea and Beach Brew Gourmet Lemonade are designed for easier mixing by consumers. Each 1-oz package makes 2 qt. Sold singly or in multi-packs, Beach Brew is stressing the versatility of the small package for the retailer. Design firm Scott Ross (Glenview, IL) helped Igo flesh out his concept for the pitcher-shaped pouch, as well as for his graphic theme, which displays a summer beach scene. Lithotype (San Francisco, CA) supplies the film, a four-layer structure comprising an external layer of 48-ga polyester/10# low-density polyethylene/.00035 foil/11/2-mil LLDPE. The film is printed offset in five colors. Rollstock is sent to an unspecified contract packager, where pouches are produced through a form/fill/ seal operation. Introduced at the FMI show in May, six flavors of Beach Brew began appearing in warehouse and grocery stores nationwide last month. Suggested retail price is about 99¢ for single pouches, about $7.49 for a 12-pack.