The U.S. Food and Drug Administration has proposed that manufacturers put expiration dates on packages of condoms. U.S.-made products typically carry "when manufactured" dates, but they are not required by federal law.

The FDA proposes to allow companies to use an expiration date of five years from the date of manufacture if a product passes two tests. These involve subjecting the individually packaged condom, and condoms packaged for sale in a box, to various temperatures for certain amounts of time. Because these tests can be done quickly--one test is over seven days, the other for 30--they are being referred to as "accelerated" tests. Don Marlowe, director of the office of science and technology at the Center for Devices and Radiological Health at the FDA, says, "I fully expect few condoms to pass the accelerated test and then fail the real-time test, that is, fail after being on the shelves for five years." Any manufacturer who gets evidence that a product goes bad before five years, after getting accelerated approval to use a five-year expiration date, is under a legal obligation to inform the FDA and pull those packages. The product line then has to carry a new expiration date, something short of five years. The FDA says it is also considering requiring expiration dates on other latex products such as medical gloves. STEEL SHIPMENTS UP--Steel shipments are up 3% for the first five months of 1996 compared to the same period last year, reports the American Iron and Steel Institute. Among major steel markets, packaging and shipping materials are up 4.3%. Phone 202/452-7126. CALL FOR ENTRIES--The Flexible Packaging Assn. is accepting entries for its 1996 Top Packaging Awards competition. Deadline for entries is November 15. Call 202/842-3880. AMERISTAR AWARDS--The Institute of Packaging Professionals has announced its 1996 program will honor the best packages submitted in 11 categories. Deadline for entry is October 15. Call 703/318-8970. 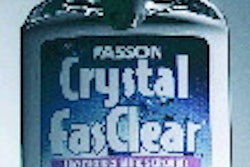 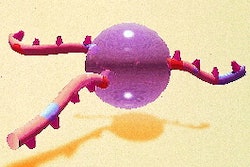 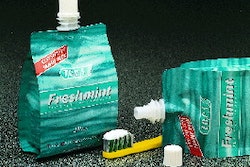 Toothpaste in a pouch