When medical device maker Boeringer Mannheim chose to use a thermoformed clamshell to show off its second-generation Soft Touch II lancet blood sampling device, the Indianapolis-based company wanted the package to be easy to open. 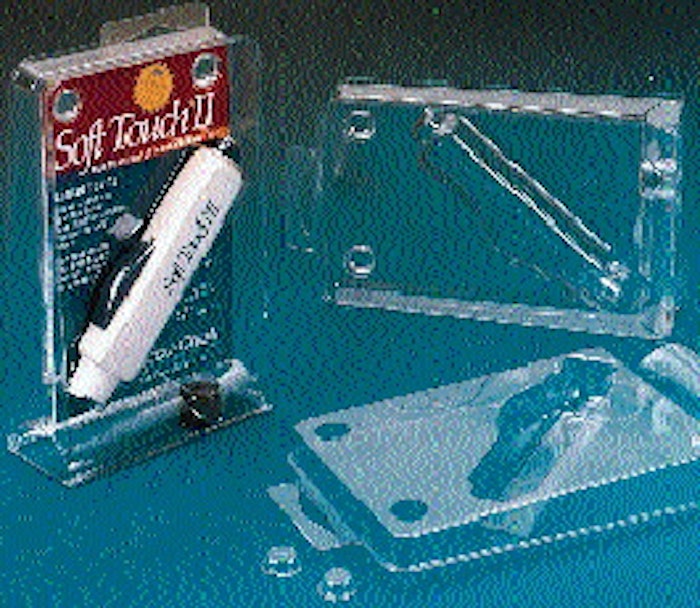 "Our customers are generally diabetic, many are older and some may have arthritis," observes Gary Farley, packaging engineer. The first-generation device was housed in an unsealed PVC hinged clamshell inside a windowed paperboard box. The new package--simply a hinged clamshell--eliminates the outer carton and makes use of special break-away perforated buttons that hold the package together, providing easy access and tamper-evidence in one design. Plastofilm Industries (Wheaton, IL) designed and thermoforms the package, which can hang on a peg or stand on its built-in base, from .020" virgin PET sheet. During package assembly at Boeringer Mannheim, the lancet device and an SBS insert card are first loaded; two male buttons on the back part of the thermoform are snapped through two female holes on the front. For extra security, the buttons are mushroomed over the hole by a tabletop hydraulic press. To open the package, the consumer simply pulls apart the two thermoformed halves, which are not welded or sealed in any way. Precut perforations around the perimeter of each button cause the buttons to separate from the back half of the thermoform, virtually eliminating any possibility of reclosing the package. The device is widely available in chain drug stores and some mass merchants, retailing for $12 to $15.