Cut, washed, packaged, and refrigerated fresh produce continues gaining in popularity in supermarkets across the country. Among the more innovative marketers is Salinas, CA-based Tanimura & Antle.

Last summer the firm launched Broccoli Time(TM) combinations of pasta, sauce and fresh broccoli in a semi-rigid thermoformed tray of polyester terephthalate lidded with PET film (see PW, October '95, p. 40). Now in national distribution are two new fresh produce lines in semi-rigid PET trays. The trays are probably thermoformed, filled and sealed in-house on the same Tetra Laval Tiromat (Avon, MA) machines used for Broccoli Time, but it's difficult to be sure since T&A is decidedly tightlipped about its operation. Both of the new items are aimed squarely at niche markets. For kids are SnackTime For Kids(TM) Cool Cut Carrots(TM) and SnackTime For Kids(TM) Cool Cut Celery(TM). The ready-to-eat sticks, about 2.5 oz worth in each tray, are paired with a dipping cup of ranch dressing sealed with a foil lid. PW sources indicate the polystyrene cups are from Portion Packaging (Bristol, PA). The trays are perforated, tear-apart three-packs with a suggested retail price of $1.49. For health-conscious, snack-hungry adults is the SnackTime(TM) Maxi-Snack, Mini Meal(TM) line. For $1.99 you get 5.5 oz of either carrots or celery along with dipping pretzels and a ranch dip. One material vendor most likely involved in these packages is Curwood (Oshkosh, WI), whose display booth at MegaShow in Chicago included the SnackTime For Kids items. These had a small puncture in the lidding material through which gases can enter and exit, thus extending shelf life of the respiring produce to 17 days. Presumably, the adult-oriented products are handled the same way. Vice president of sales and marketing Dave Eldridge says the SnackTime For Kids line is a natural. "We've shown great turns in sales with minimal advertising," he says. As for the adult-oriented line, he adds, "Now adults won't have to pretend they're buying SnackTime for Kids for their children." 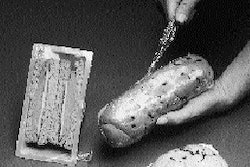 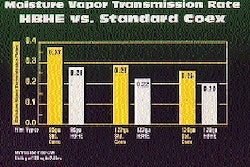