Marketed as “The new sound of green,” the SunChips 100% compostable flexible snack bag will begin appearing on Canadian retail shelves in March.

Pre-empting a publicized U.S. Earth Day launch, Frito Lay Canada (a division of PepsiCo) has announced that it will start stocking shelves with the new 100% compostable SunChips bag in March. The flexible packaging will be made from more than 90% renewable, plant-based materials and will completely break down into compost in a hot, active compost pile in approximately 14 weeks, according to the company.

The renewable material used to produce the SunChips 100% compostable bag is made from a plant-based PLA material.  After four years of research and testing, Frito-Lay North America's Research and Development team identified PLA as the key material that meets the company's performance expectations. PLA ensures the product in the bag maintains the quality and freshness Canadian consumers expect, the company says.

The SunChips' compostable packaging has been certified through the Biodegradable Products Institute (BPI),  which means that it can be incorporated into waste management programs destined for composting, provided the local infrastructure is both available and capable of including this packaging material within their system. In the months ahead, SunChips will be working with local composting initiatives to enable the new packaging to be included in green bin programs as much as possible.

"Having designed packaging with the environment in mind, SunChips' certified compostable packaging will help raise awareness of the environmental importance of composting," says Susan Antler, executive director of the Compost Council of Canada.  "We hope the introduction of initiatives such as the compostable SunChips bag will encourage and make it easier for Canadians to participate in composting such that over time, we will see an increase in the number of Canadian households that compost. This will hopefully also spur the industry to continue to develop and enhance the technology needed to create packaging from renewable resources such that it can be easily incorporated into waste management systems."

The SunChips 100% compostable chip bag will start appearing on shelves in Canada in March in 225- and 425-g bags, with the balance of SunChips packages transitioning into the compostable packaging in August 2010.

"As we embark on a new decade, environmental initiatives are more important than ever," says Tony Matta, vice president of marketing, Frito Lay Canada. "Every step counts as we strive to shrink our footprint on the planet, and the SunChips 100% compostable chip bag is one small step towards a greener future."

Frito Lay Canada reports that has been working to reduce the company's environmental impact for more than a decade. In addition to the SunChips 100% compostable chip bag, Frito Lay Canada has: 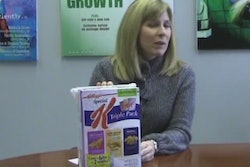 OFF THE SHELF: Kellogg's bundles cartons in film 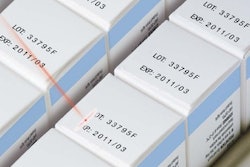 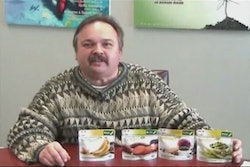 OFF THE SHELF: Innovative standup pouch for baby food