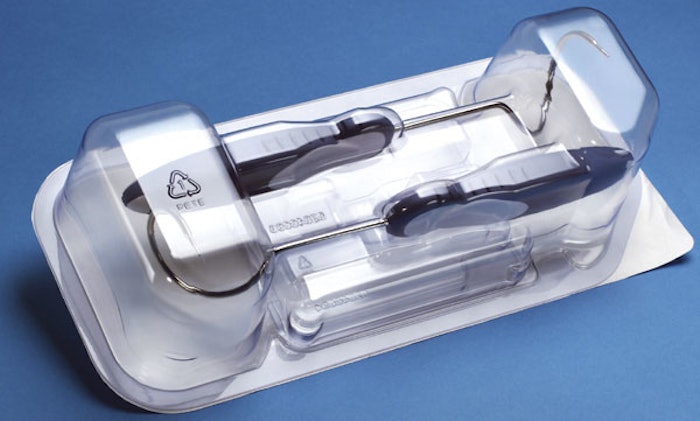 By orienting its medical device needles in opposite directions, AMS is able to place them closer together, reducing the tray siz

The original trays for the Sparc Sling System and Monarc Subfascial Hammock were bulky and difficult to handle, says Brent Binkowski, operations engineering manager for Minnetonka, MN-based AMS. “They also took up a lot of shelf space and created packaging waste at the hospital,” he adds.

Besides addressing these issues, AMS wanted to switch from a double-barrier tray configuration that included both an inner and outer tray—plus an insert that held the needles in place—to a single-barrier tray to further reduce packaging costs.

Perfecseal helped AMS rearrange the products in the inner tray so that they took up less space. Prior to the redesign, the needles pointed in the same direction, forcing the handles to be spread further apart to accommodate the needles’ side-by-side helical loops. By orienting the needles in opposite directions, the needles could be placed closer together. The new orientation resulted in tray size reductions of 68% for the sling system and 54% for the subfascial hammock device.

The new tray was narrower than its predecessor, but it was also deeper, which presented a challenge for Perfecseal: “Deeper draws are more difficult to thermoform,” says Steve Olson, Perfecseal’s design team project engineer, “especially in the handle area where the cavity had to conform closely to the actual product handle.” Perfecseal overcame the draw-ratio issue by experimenting with different plug-assist configurations that provided adequate thickness and sufficient impact resistance to protect the product.

The initial trays were made of uncoated PETG, which required tissue interleaving for denesting to prevent them from sticking together. That added to the expense of the tray, and to labor and handling. AMS had to contend with each individual sheet once the product entered the cleanroom. The company’s sealing validation was done using uncoated PETG, so switching to a silicone-coated material would have led to a revalidation of all their seal parameters. Perfecseal suggested using C0025 internal denest PETG from Pacur, thereby eliminating the need for the tissue interleaf.

The trays and lids (made from DuPont’s Tyvek®) are shipped to AMS where the devices are hand-loaded. Trays are sealed using a Belco Packaging Systems BM PCL 2020 sealer. At the point of kitting, the trays containing the needles are married with the implants, which are packaged in a foil pouch. The company produces about 100ꯠ units a year for both devices.

Switching to a single-barrier system using the downgauged materials has saved AMS approximately $1 million a year and another $500ꯠ in cleanroom labor due to the elimination of the interleaf tissue.

Feedback from the field has been very positive, says Binkowski. Doctors and nurses that use the product have commented on the waste reduction and increased shelf space. The reduction in materials also allows healthcare workers to open the package quickly and easily. Binkowski describes the package as “the shining star of our product portfolio.” In 2005, the redesigned Monarc tray won an award from the Society of Plastics Engineers.