Paradise Tomato Kitchens of Louisville, KY, began last fall to offer two new packaging improvements that company president Ron Peters claims are innovations in the tomato sauce segment of the foodservice market. The first is a tamper-evident shipping case that required the help of his corrugated supplier. The second is an easy-open tear notch that’s incorporated into the seal area during filling and sealing.

Since its founding, PTK shipped pouches of its tomato products in rugged bliss-style shipping cases that provided excellent protection to the vulnerable flexible pouches inside, usually in a six count. In itself, those cases were an improvement at the time, at least from the product protection aspect.

However, after 9/11, Peters and PTK began to examine how well the boxes secured the pouches inside from acts of contamination or even terrorism. “Generally, bliss-style-box top flaps simply meet in the middle of the top of the box,” Peters says. “So, it’s possible for someone to lift one top flap and slide something into the package. Or even more insidious, someone could possibly even inject something into one or more of the pouches inside. Worse, the end user, our customer, wouldn’t necessarily be aware that the product had been contaminated or adulterated.”

So PTK went to its corrugated supplier, Inland Paperboard & Packaging (Indianapolis, IN), and to the maker of its box erector, Moen Industries (Santa Fe Springs, CA), for help in developing a tamper-evident shipping container.

Most corrugated box designs are symmetrical. Among other advantages, that makes them more efficient in their use of corrugated. But PTK wanted the top flaps to overlap so they could be sealed with hot melt adhesive. “Essentially our box design has one top flap that is an inch wider than the other so it creates the overlap,” Peters says. “We worked with Inland and Moen to make the new case blank and to modify the erector so it could make the modified case.”

Inland refers to the new box as a “bliss-wrap safety seal,” according to Jeff Workinger, PTK account manager for Inland in Louisville. The blank is made from 44-ECT C-flute corrugated, usually printed flexo in a single color, though print specs can vary by the needs of PTK’s customers.

The overlapped top flap is later sealed with hot melt adhesive on PTK’s case sealer, to which an extra hot melt applicator was added. “Because the top flaps are completely glued down, it’s virtually impossible to pop open the case without the customer noticing it,” Peters says. The overlap seal is printed with “safety seal” information so the customer understands that the flaps are sealed.

Although Moen helped design the change to its bliss-style case erector, PTK actually did the installation in its plant. And it did the redesign of the case sealer in-house, too.

Disposal an issue, too

Although the bliss-style container was originally selected for the protection it offered to the pouches inside, PTK was also concerned with in-restaurant handling and ease of disposal after the pouches had been removed.

“Bliss-style boxes are built like tanks,” says Peters. “Our goal working with our corrugated supplier was to create a box that stayed very strong through delivery but also one that was simpler and easier to knock down later.”

So among other box features, there’s a perforated hand-hold punch-out in the top, and the bottom of the box is scored in an X-pattern. “Because of the score lines in the bottom, a worker can simply punch the center of the X, and the box collapses easily,” says Peters. “This makes it easy to stack the box at the store, either for a corrugated baler or for putting it into a dumpster for disposal.”

Tear notch for the pouch

At about the same time the new case went into production, the company began to add a tear notch to each pouch.

PTK retrofitted its form/hot-fill/seal equipment from Cryovac (Duncan, SC) with the tear-notch tooling. In the case of the PTK pouches, the notch directs the pull toward a corner so it’s easy to pour out the contents of the pouch.

Cryovac wouldn’t discuss the packaging material, but the company did say that it’s extruded with some orientation so it exhibits tear properties in the longitudinal direction.

To minimize any worry about seal integrity, Cryovac says, the seal bar actually seals a perimeter around where the notch is going to be cut. “So, in essence, the notch actually has its own seal area,” says a Cryovac representative. “That way, we minimize any chance of leakers through the notch.”

PTK was definitely concerned about seal integrity because its pouches have very little headspace. That’s why, in the past, these pouches had to be opened with a knife or scissors. “In the interest of safety and convenience, we wanted to offer the easy-open feature,” Peters says. “Most of our customers have responded very well to it.”

So whether it’s easy access to pouches or tough-to-open shipping cases, PTK continues to use packaging to distinguish itself from competitors. 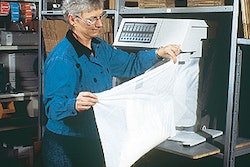 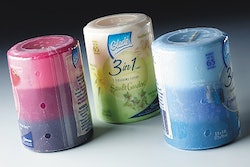