A shrink sleeve fitted with a theft-detection wire provides a French silverware manufacturer with a new way to safely display its wares. No one ever said the French always follow the rules. Amefa France in Thiers, France, is a good example. According to marketing manager Jean-Michel Parisy, the company was looking for a better way to display its products. 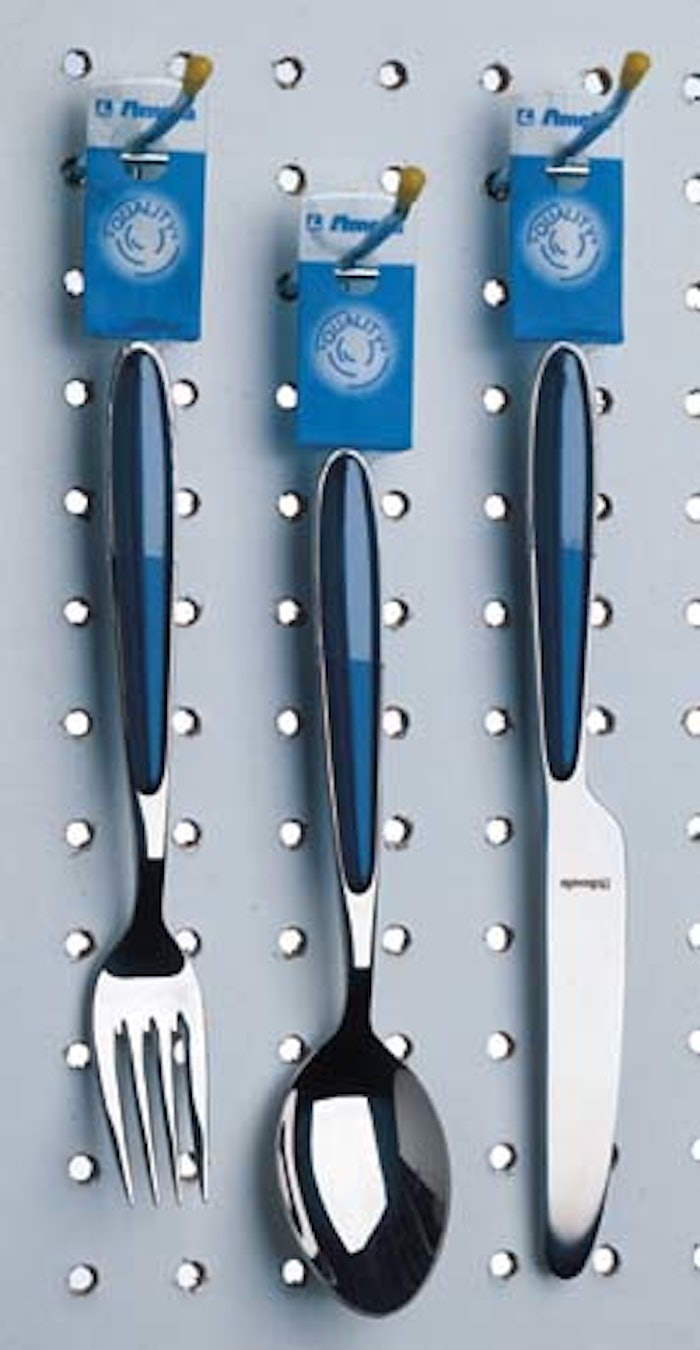 On the back of the sleeve, a nearly undetectable electromagnetic wire is automatically applied near the seam. This theft-protect

The company manufactures low- to mid-priced silverware (about $1 to $3 per piece) sold in supermarkets in Europe and South America.

“The silverware was in a display box, and the items could be easily damaged or scratched [by rubbing against each other],” Parisy says. “We wanted to find a way to hang them.”

Parisy explained his problem to representatives from Sleever Intl. (Paris, France) about a year-and-a-half ago, and they suggested Sleever’s patented Pegsleeve® shrink sleeve. The 110-micron (4.4-mil) polyester sleeve is shrunk around the top of each piece of silverware’s handle. The material that extends from the end of the utensil is punched with a hole, allowing the pieces of silverware to hang individually. Sleever also developed a prototype machine specifically for Amefa to apply and shrink the sleeve to the silverware and punch the peg hole.

But Amefa gained more than just a way to hang the silverware. Pegsleeve also incorporates an almost undetectable electromagnetic theft-detection wire into the back of the sleeve. Measuring 5”L and 1-mil thick, the wire is supplied by Sensormatic (Boca Raton, FL). It sends out a signal at a specific frequency that, when picked up by towers at the checkout aisle, sets off an alarm. At the checkout counter, the cashier scans the silverware and pushes it to the end of the counter, bypassing the towers at the end of each checkout aisle. The customer proceeds through the towers to retrieve the silverware.

Americans are used to radio frequency and acoustomagnetic security labels. Unlike the electromagnetic wire used by Amefa, those EAS devices are deactivated when the bar code is scanned at checkout. “The reason we use electromagnetic in Europe and South America is because the installation technology [like pedestals and deactivation systems] is less expensive,” says Barbara Matooka, marketing manager of global source tagging at Sensormatic. “In most stores there, they don’t have the wide exits that we have here in the U.S. So they have [pedestals at] the three-foot aisle exit and are fine with that.”

Although it may seem unusual to American consumers, about 50% of silverware in Europe and South America is sold individually, according to Parisy. Considering the number of individual units Amefa sells, the added cost of putting a sleeve on each piece is significant. But the investment is well worthwhile, says Parisy.

“Theft represents five percent of sales, so the cost [of the sleeves] is more than made up,” he says. “For the low-cost silverware, the sleeve is put on three spoons, for example, to keep costs down.”

At Sleever’s plant in Toulouse, France, the polyester sleeve material is cast-extruded and then oriented bi-directionally to give it its shrinking memory. In a separate Sleever facility, the film is gravure-printed in two colors with the Amefa logo and an icon that says “Quality.” After printing, the Sensormatic wire is automatically applied, but Sleever won’t divulge specific information about the wire application. Then the film is seamed into sleeves and wound. The seamed film is supplied to Amefa in roll form.

At Amefa, operators load the roll of sleeves onto the prototype semi-automatic rotary sleeving/shrinking machine. Mounted on it is an ink-jet printer that imprints a bar code and a two-line description of the silverware item and style on each sleeve. At the next station, suction pulls open the sleeve, and an operator slides the handle of a piece of silverware into the sleeve. After a knife cuts the sleeve from its roll, an operator takes the silverware topped with the sleeve, and sends it into the shrink tunnel. Exiting the shrink tunnel, Pegsleeve has a small hole punched in it for pegboard hanging. The machine operates at 15 to 20 products/min. The sleeved silverware is then conveyed to a manual packing station.

Based on Amefa’s success thus far, Sleever has developed a completely automatic sleeving/shrinking machine, which can be used for applications like eyeliner pencils and other cosmetics. Amefa was scheduled to replace the prototype with the new machine in the first quarter of 2000. The new machine is said to reach speeds to 50 applications/min.

The innovative packaging has garnered praise from several organizations, including a 1998 Eurostar Award for Packaging from the European Packaging Foundation. And according to Parisy, displaying Amefa silverware individually on a pegboard has increased sales by 25%.

“Amefa is a market leader,” says Jean-Charles Fresnel, export sales manager for Sleever Intl. “They were smart enough to get into a very new concept in packaging, and take a risk to get into it. Right now, the way they display their product makes them killers in the market.”

Or you can jump right to their Web site if one is displayed.