Ready-to-eat, single-serve combination packs pair cereal with milk (and spoon) in the refrigerated case. The 'eat-from' packs show that innovation is alive and well on both sides of the Atlantic.

Jim ButschliJim Butschli
Breakfast Mates will represent the first cereal package that Kellogg will sell in the refrigerated section. The 0;eat-from? pac

Next month, venerable cereal maker Kellogg Company will introduce Breakfast Mates(TM) to U.S. supermarkets. Each of the varieties will include a 1-oz portion of cereal in a thermoformed bowl, and 4 oz of aseptically filled milk in a brick carton, as well as a plastic spoon. These components are housed in a brightly decorated folding carton.

The milk in the brick pack is, of course, shelf stable, so there's no need to refrigerate Breakfast Mates. Nevertheless, it will be displayed in the refrigerated case because many shoppers will likely consume the product shortly after purchasing and Kellogg marketers felt keeping the milk cold is more appealing. Shelf life is six months.

Across the Atlantic Ocean, consumers in the United Kingdom have for several months now been able to purchase another cereal and milk combo: Ennis Foods' Rumblers. Marketed in four varieties and in different sizes, Rumblers is sold to retail and airline customers.

Rumblers' unusual packaging includes two separate bowl-shaped thermoformed cups for the cereal and milk. The milk is pasteurized via a proprietary process for a 28-day shelf life. Because they're not aseptically packed, Rumblers must be sold chilled.

The lidded milk container is turned upside-down, with its smaller-diameter mouth fitting snuggly into the mouth of the right-side-up cereal bowl. The cereal bowl also includes a plastic spoon that must be unfolded to use. A colorfully printed shrink-sleeve label bands the two cups into a single unit. The label extends from the top of the pack down to the base of the polypropylene cereal cup. Copy on the label's top instructs the user to pull a tear strip along the area where the mouths of the two bowls meet to open the package. Step two says "separate pots," followed by "pour milk into cereal." The latter step involves removing the clear plastic lidstock on the cereal bowl. The consumer also pulls a tab on the milk container's lid that uncovers a small orifice to pour the desired amount of milk into the cereal bowl.

In the case of Breakfast Mates, the outer folding carton serves as a convenient tray to hold the cereal bowl and milk carton. Both the Breakfast Mates and Rumblers package configurations offer differentiation from those of other cold cereals in that they're sold ready-to-eat in the refrigerated section.

The Kellogg and Ennis Foods entries will likely be watched closely by cereal competitors to determine if the refrigerated section can become a viable sales option for this product.

When Packaging World inquired about packaging material specifications, Kellogg was mum. Part of its reticence may be attributable to the fact that the product isn't scheduled to reach supermarkets until mid-July.

Looking at Breakfast Mates package samples supplied by Kellogg, the colorful paperboard folding carton graphics include arms extending from the first and last letters of the product's Breakfast Mates name. The arms are shown holding a representation of the bowl, milk and spoon.

The aseptic brick's top includes a graphic that instructs the consumer to pull back a tab. When this is done, a teardrop-shaped opening makes pouring out the milk easy. Tetra Pak (Chicago, IL) supplies the aseptic Tetra Brik cartons, which it prints with Kellogg's Richland Dairy brand logo. Milk is co-packed by several companies. Copy on the carton's back panel tells the consumer, "this unique package and special ultra- high temperature processing keep Richland Dairy milk fresh for up to six months." The type also explains that the product needs no refrigeration until after it's opened.

The resin code on the bottom of the thermoformed cereal bowl identifies the plastic as high-density polyethylene. The lidstock includes a top-printed paper, foil and a heat-seal layer that adheres the lidding to the lip of the cup. The lidstock instructs users to open the cereal by pulling a tab in one corner.

"Breakfast Mates will be the first cereal product Kellogg has ever sold in the refrigerated section," states Karen Kafer, the company's director of product communications. "The unique packaging makes having a wholesome cereal breakfast easier than ever for today's busy families."

The company will market Breakfast Mates to children, "and to busy parents and singles looking for the convenience and portability offered by the all-in-one packaging of the cereal, milk and spoon. . . with virtually no preparation or cleanup."

For distribution, this product creates another first: Kellogg will partner with Dannon Co. in the U.S. Already a player in the dairy section, Dannon will sell, distribute and merchandise Breakfast Mates, according to Kellogg.

Described as "capitalizing on the growth in the meal kit segment" by the company, Breakfast Mates will carry a $1.29 suggested retail price. The four varieties include Frosted Flakes®, Mini-Wheats®, Froot Loops® and Corn Flakes®.

Rumblers in the U.K.

While Breakfast Mates will be introduced next month in the U.S., U.K. consumers are already indulging in Rumblers, a cereal PW spotted at Pakex 98, held March 30 to April 3 in Birmingham, England.

More precisely, the Rumblers package/product was displayed at the stand of Wilsanco Plastics (Tyrone, County Dungannon, Northern Ireland). Wilsanco thermoforms the two polypropylene cups, one for the cereal, the other for the milk.

According to Wilsanco, new tooling was used to manufacture the cup, which is produced from sheetstock in varying thicknesses. Depth-of-draw for the retail cereal container is 60 mm (2.36"); 30 mm (1.18") for the retail milk "bowl." The retail version contains between 40 and 60 g of cereal (depending on product density), and 125 mL of milk. A smaller size for the airlines holds approximately 25 g of cereal and 85 mL of milk.

When asked, Ennis Foods' managing director Declan Ennis refused to provide any marketing or packaging details on Rumblers, citing competitive reasons. He did report no plans to enter the U.S. market with the package/product.

According to an Irish newspaper, Ennis Foods "has secured exclusive rights to Milk Marque, a pasteurizing 'product' that retains the milk's freshness for a chilled shelf life of 28 days." Rumblers is produced in Killygordon, County Donegal, Ireland. The report says the Rumblers introduction follows three years of market research and technical development.

Rumblers sells for under £1 at Tesco retail stores in various U.K. locations. The samples shown here were purchased in England by PW and priced at 89 p (about $1.42 U.S.). The four Rumblers versions include Honey Nut Corn Flakes, Cereal Clusters, Crispy Muesli and Fruit & Fibre. 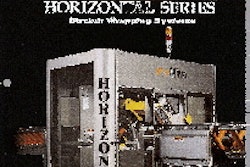 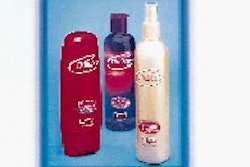 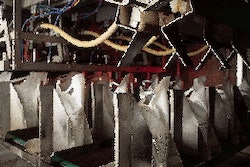