Pat Reynolds
Ener-G Foods is phasing out the package on the far left, produced from rollstock on a thermoform/seal machine, in favor of the

Sam Wylde III of Seattle-based Ener-G Foods is persistence personified when it comes to improving the packaging for the dietetic gluten-free breads his firm produces. His persistence has made Ener-G one of the first U.S. food companies to pack products using a silica-coated flexible film. Produced by PC Materials (Mt. Bethel, PA) and incorporated in a three-layer lamination made by Outlook Packaging (Oak Creek, WI), the 48-ga silica-coated polyester helps provide a reliable 12-month shelf life that lets Ener-G export confidently to markets throughout the world. So why does a line of bread products require such global distribution? Because according to Wylde, no one else makes them. Gluten, it should be pointed out, is a mixture of two proteins found in wheat and other cereal flours. In the rising of dough, gluten forms an elastic network that traps CO2, thus giving bread its desirable crumb structure upon baking. It so happens, however, that certain people are made ill by gluten, so they can't eat ordinary wheat- or rye-based breads. "What makes our product unique is that we've found a way to trap the carbon dioxide without gluten," says Wylde. "Others can make bread products like this by using wheat starch, but still that results in small amounts of gluten, which can make people sick. Our products have no gluten whatsoever." As with any bread, says Wylde, oxygen speeds spoilage, so if oxygen can be kept from his bread, shelf life can be lengthened. Not too long ago, Ener-G relied on a 14-layer coextrusion that included two separate layers of ethylene vinyl alcohol. The material was supplied in rollstock and fed into a horizontal thermoform/seal machine. Operators loaded bread by hand and included a desiccant before the packages entered a station for evacuation, backflush, and lid sealing. Lidding material also included EVOH for barrier purposes, but only one layer of it since the lidding didn't get thinned out in the corners of a forming mold. A switch in packaging materials suppliers brought a new structure to Ener-G. Once again EVOH was included, but now it was sandwiched between two layers of polyvinylidene chloride. "That protected the moisture-sensitive EVOH while also adding to the overall barrier," explains Wylde. While it was an improvement, it didn't stop Wylde from keeping his eyes open for something better. "As long as we had EVOH as part of our barrier, we faced increased spoilage, particularly in the summer when heat and humidity are higher," he says. "Once the gas barrier properties of EVOH are compromised by moisture, you're not going to get the kind of shelf life we need." Wylde's next step forward came when he learned that "glass-coated" films, as silica-coated materials are sometimes called, were finding their way into the Japanese marketplace and offering superb barrier properties combined with glass-like clarity. By the summer of '94 he'd tested some and had begun using them, though it meant switching to premade bags. Thermoforming a glass or glass-like coating, after all, was out of the question. The premade bags, imported from Japan, carried an upcharge of about 3¢ each. That didn't bother Wylde too much. "We made it up with reduced spoilage and increased customer satisfaction," he says. His loaves sell for between $2 and $3. What did bother him was the long lead time involved and, even more, the 12-week letter of credit the supplier in Japan required. "Who wants fifty or sixty thousand dollars tied up 12 weeks in a shipment from Japan?" says Wylde. So he asked Outlook Packaging, the firm that had been supplying him with rollstock for his thermoformed bread packages, to see if a U.S. supplier of silica-coated films could be identified. Outlook found PC Materials. PC coats 48-ga polyester film using its proprietary low-temperature plasma coating technology (see p. 50) and sends the material to Outlook. There it's adhesive laminated to a layer of CAPRAN EMBLEM, a 72-ga biaxially oriented nylon with polyvinylidene chloride coating supplied by AlliedSignal (Morristown, NJ). In a second pass, a 1.5-mil low-density polyethylene is adhesive laminated to the polyester to make the three-layer structure heat sealable. Outlook then runs the material through a bag-making machine and ships finished bags to Seattle. Unit cost, says Wylde, is about the same as the Japanese import. But now the long lead times and the letters of credit are history. At Ener-G's plant, two twin-chamber vacuum machines are used to package the bread. After a colorful paper insert with product information is added and the bread is inserted, the open end of each bag is placed over a vacuum nozzle, the chamber is closed, it's evacuated of ambient air and backflushed with nitrogen. Hot wires seal the bags closed. "We backflush to give the package an internal pressure equal to the external pressure exerted on the bag when a truckload goes into mountainous territory," says Wylde. Without the inert gas inside the package, the bread would be crushed. While evacuation and sealing are taking place, the twin chamber on the opposite side is loaded with six bags and the process repeated. The vacuum machines get oxygen levels down to 0.5%. To reduce it even further, an oxygen absorbing pouch from Multisorb Technologies (Buffalo, NY) is placed in each bag. The impermeability of the film, which has an oxygen transmission rate of 0.04 cc/100 sq"/ 24 hrs, keeps the entrance of oxygen to a minimum. After six months of using the silica-coated bags from PC Materials and Outlook, Wylde says he'll soon eliminate the thermoform approach entirely and rely solely on the new bag. He admits that producing from rollstock would be preferable, because it means not paying someone else for bag-making. But he also emphasizes that the only thing that really matters is preventing spoilage reliably and consistently. As long as the silica-coated bag accomplishes that, a premium of a few pennies per unit is acceptable, he says. 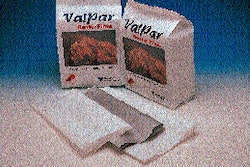