Providing potential customers with a mock-up package design isn't a radical concept. Packagers have done it for years. However, being able to design and view a package before it's produced, via digital color prints, is an achievement. One that's used as a competitive advantage by Great Neck Saw Manu- facturers, Inc., Mineola, NY. Within the last year, the manufacturer of hand tools has boosted its sales with this capability. Its package designer, Erin/Edwards Advertising (Glen Head, NY), calls it "virtual packaging." "We've always been able to show a customer mechanicals or comps, and they look okay, but this technology lets them see something that is so good it sometimes appears even better than the real package," says Robert Jacoff, vp of sales and marketing for Great Neck Saw. The packager is one of Erin/Edwards' first clients to use "virtual packaging." "We've employed the agency as a package designer for about four years," says Jacoff. "They've generated designs on the computer in the past, but this process wasn't used until about a year ago when they brought it to our attention." The advertising agency/package designer credits software from Quark Inc. (Denver, CO) and Adobe Systems (Seattle, WA) among the programs it uses for its virtual packaging efforts. The first package designed via this concept for Great Neck Saw was for a socket set sold by Auto Zone, a Memphis, TN-based automotive retailer. (One Auto Zone item designed via virtual packaging is pictured.) "Virtual packaging certainly helped us make that first sale," says Jacoff. "Now, we use it primarily for larger orders numbering more than 100ꯠ units," he notes. "I don't know if we could break down how many additional sales we've made because of this virtual packaging, but I believe that if you want to be a player in today's marketplace, you have to have all the parts running or you're not going to grow. That includes quality product, pricing and packaging." Great Neck stocks approximately 2귔 items, mostly for private-label sales for retailers such as Wal-Mart, Ace Hardware and True Value. A few major department and home center stores also carry lines made by Great Neck, though Jacoff says they wouldn't want it known that they don't make those particular product lines. Approximately 40% of the packager's tools are sold under the Great Neck Saw name. The products fall into some 25 "lines," such as saws, levels, squares, chisels, screw drivers, saw frames and blades. Great Neck Saw manufactures most of these products, at three plants in New York, one each in Massachussets and Tennessee. A small percentage of products are imported, primarily from the Far East. Almost all products are packaged at the U.S. manufacturing sites, typically into corrugated and chipboard cartons, skin-packs or clamshells. Product is shipped from three distribution centers; the NY headquarters, Tennessee and California. From these centers, product is transported either to wholesalers or direct to retail chains. "More and more, our customers want to see what the finished package will look like before they'll carry it in their stores," says Jacoff. "Particularly if a product is coming from China or Taiwan. If they like the look of the product and the package, they'll buy it. "What virtual packaging does for us is give our customers a chance to see what our package will look like on the shelf. It also gives them a chance to alter the package and become involved in actually designing it. They can say they like this, or don't like that, and we can work with Erin/Edwards to make the appropriate changes." The agency's president, Ed Brennan, describes the package design process: "We create traditional thumbnail sketches initially. Great Neck and their clients can determine what they like. Once we get a direction from them, we go straight to the computer to create a design. We start by using Quark XPress(TM). "With Quark, we make separate panels to represent the front, back, side and top and bottom panels of the carton or package," he continues. "We develop each of the panels as an individual element or component, and then export them as encapsulated postscript files, into Adobe Systems' Photoshop(TM), to create a three-dimensional cube of the package, with specific dimensions produced on their Dimensions(TM) program." Brennan adds, "We marry the graphics for each panel and can rotate the image to gain a better perspective. We use different software programs to animate the movement, with the graphics remaining married to the appropriate carton panel." Erin/Edwards saves this Photoshop file on a diskette and sends it to a service bureau for a printout on a high-resolution dye-supplemation printer. This realistic print is viewed by Great Neck and its client for possible changes. When it's approved, Erin/Edwards shoots the print. Great Neck sends the film and match print to one of its converters for printing. Why does Great Neck Saw use an agency to perform this task when, theoretically, they could do it themselves? "First, we'd have to hire people trained to use the software, and we'd have to buy the software and computers to do it," notes Jacoff. "But besides that, we like to use this organization, and we have for years. They're tremendously creative and they get the job done quickly. "Could we do this a cheaper way? Probably, but what we're trying to do is present our product to our customers in the best light. Erin/Edwards' people are trained to do that. We believe that we can justify these costs in that what we're able to present is superior to that of our competition. And it gives our customers a sense that they're dealing with the right people. You can't put a dollar figure on that!" 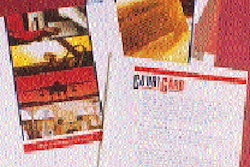 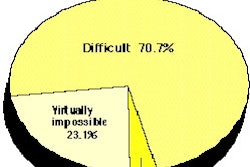 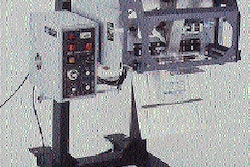