The replacement of steel drums with a biodegradable, corrugated intermediate bulk container surprises American Ingredients with extra benefits in production and sales.

Typically shipped in steel drums, bulk vegetable oils shipped to food processors can present almost as many disposal problems as automotive lubricants. To combat this problem, Dolton, IL-based American Ingredients began selling oils in a package that has environmental benefits as well as advantages in production and savings in space. Now the company finds that the package practically sells itself. American Ingredients began adding MacMillan Bloedel's intermediate bulk container (IBC) to its offerings of shipping containers as early as 1992. SpaceKraft® is a seamless container, wound from eight plies of 69# linerboard and 33# A-flute medium. It comes with a film liner to prevent the product from absorbing into the corrugated. Dispensing fitments allow easy draining by the food processor. SpaceKraft comes in four sizes: 220-, 270-, 330-gal, that are equivalent to four, five or six 55-gal drums, or a 1ꯠ-L export container. American Ingredients uses the 330-gal version with a linear low-density polyethylene liner. Multiple-ply film bags are available in a range of food grade films for specific barrier requirements. The empty containers are shipped to American Ingredients in four components: a corrugated outer sleeve and box cap, a multiple-ply film bag that comes in an easy-to-use corrugated cassette, and a shroud made of polyethylene. It can take as little as three minutes for one person to set up the container for filling. First, the box is placed on a pallet, the bag cassette opened and filling hoses attached to a fitting on top of the bag. The cassette is then placed on the bottom of the box and the bag's drain fitting aligned with a hole in the outer box. An operator then opens a valve for filling from an overhead feed line. When the optimum weight of 2귨 lb is reached, filling automatically stops via a scale in the filling unit. A PE shroud is then placed over the box, the corrugated box cap is put in place and the unit is strapped tightly to a pallet. American Ingredients fills the IBC on a load-cell platform that has access to filling nozzles from four different production centers. "This container has terrific production efficiencies over drums," says Rick Hulfeld, plant manager at American Ingredients, "but with warehouse costs at a premium today, the space savings are equally important." SpaceKraft containers are shipped to American Ingredients 60 at a time, stacked in 5 pallets of 12. They occupy just a fraction of the space that would be required to store an equivalent 360 drums. When filled, one 330-gal SpaceKraft IBC fits into the same space as four steel drums. But the IBC holds the equivalent of six drums of oil. That's an additional 20% savings. In addition, the compact, rectangular shape of the container allows for better stackability. According to MacMillan Bloedel, the two smaller units can stack 4-high on a pallet, or 3-high for the 330-gal size. At the onset American Ingredients assumed that only companies that had a problem with drum disposal would be interested in using the IBC. "The drum problem is serious in a number of areas," says Roger Masa, vice president of sales at American Ingredients. "Some customers requested the bulk container. But we also used it as a selling tool. We said we recognize there are many problems, environmentally, and we can help solve those problems." One of the first of American Ingredients's customers to begin using SpaceKraft was the 100-year-old food retailer, Kroger. The Cincinnati, OH-based store operates over 27 plants, producing baked goods, dairy products, pet foods, peanut butter, and spices. Kroger's bakeries use a soy oil blend, which is sprayed into bread pans to prevent products from sticking. The Anderson, SC, baking plant switched to SpaceKraft to eliminate drum disposal problems in 1992. That and other benefits in production and space savings caused Kroger's Indianapolis, IN, plant to switch this year. "We can get 34% more product on a forklift with the SpaceKraft unit than we could with drums," says Jack Rosenberger, general manager of the Indianapolis bakery. "Plus, we only have one container to empty, not six. That really speeds up production." Similarly, over one-third more containers can fit into the same sized warehouse space as compared to steel drums. After Kroger knocks down the empty containers, which will then be recycled, they use only 20% of the warehouse space it would take to store an equivalent amount of drums. According to Masa, the new container is opening up new doors for American Ingredients. "We've had calls from people who want to receive their product in this container, either for environmental reasons or because they're aware of the production benefits. And these are customers with whom we haven't done business before." 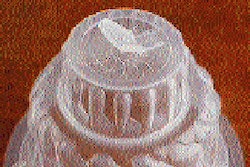 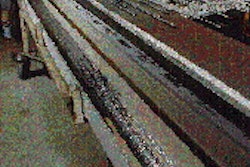 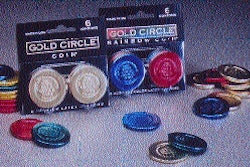 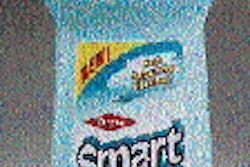