The following is an abbreviated version of the original press release.

The escalating energy crisis has Europe at risk of running short of natural gas stockpiles in the middle of peak winter demand, should Russia continue to restrict supplies. With uncertainty mounting and the potential for mandatory rationing ahead, proactive European printers are converting to LED-UV curing on their web presses to avert the risk of being unable to print. Converting web presses to LED-UV curing is an immediate action European printers are taking not only to end their reliance on gas for the short term, but also for long-term quality, productivity, and environmental benefits that make the investment worthwhile.

Baldwin Technology has had an influx of requests for such retrofits and has been installing them at record pace for a growing number of customers racing to eliminate their reliance on gas to ensure continued production in the worst-case scenario of potentially severe disruptions this winter and beyond.

“European printers need an immediate solution. Presses with gas dryers are vulnerable to the crisis, and printers need a partner they can trust for converting to LED-UV,” says Carsten Barlebo, Baldwin’s AMS Spectral UV sales leader for Europe. “We have walked more web offset printers through LED conversions than all other companies combined, so Baldwin is that partner. “

Converting to LED UV is also the clear choice for the environment, with a significantly smaller carbon footprint through far less energy consumption used in the process. With LED-UV, only around 28 kW/hr is needed to cure a 1,000-mm wide web at full production speed, which results in a minimum of 70% less energy consumption versus a heat dryer. This savings not only aligns with printers’ increasing implementation of sustainability objectives, but also with the acceleration of mandatory carbon footprint reduction regulation, which is especially pronounced in Europe but also trending globally. Additionally, LED-UV curing is compliant with Europe’s Restriction of Hazardous Substances in Electrical and Electronic Equipment (RoHS) standards by eliminating mercury and ozone.

With the worldwide paper shortage bringing its own set of challenges, LED-UV also allows for use of thinner, less expensive papers along with the introduction of new stock types, and up to 30% less ink consumption. Recyclability of the printed material is the same as with oil-based ink.

Other benefits of LED-UV include instant activation of the lamps on and off with no standby and the elimination of heat emitted, which enhances both the quality of the finished product and the working environment in the pressroom.

Baldwin’s AMS Spectral UV brand pioneered and proved the concept of LED-UV on web presses in 2016 and has since converted more presses worldwide than any other supplier, with nearly two dozen installations across Europe, the U.S., and Asia. 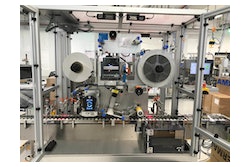 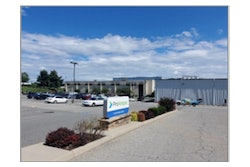 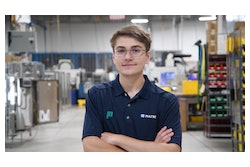