Anne Marie Mohan
Sep 29, 2020
In the U.S. and Canada, the three Windex formulas in the Social Plastic bottle are sold in a number of retailers, such as Target and Walmart, as well as on Amazon.

The new product offerings are part of the company’s global partnership with social enterprise Plastic Bank, forged the previous fall, to reduce the amount of waste entering the ocean, while also helping alleviate poverty in developing countries. The partnership is also a major part of its plan to triple the amount of PCR plastic content in its packaging by 2025. Under the partnership’s three-year agreement, the goal is to collect 30,000 metric tons of ocean-bound plastic, the equivalent of stopping approximately 1.5 billion plastic bottles from entering the ocean—a target that an SC Johnson spokesperson says they are on track to meet.

“Under the new three-year agreement, we will reach a total of more than 500 collection centers and points across several countries, including Indonesia, the Philippines, Thailand, and Vietnam—four of the five countries that contribute the most to ocean plastic—as well as Brazil,” the spokesperson shares.

An interesting twist to the initiative is Plastic Bank’s use of Blockchain technology to help plastic waste collectors earn a stable income. The Social Plastic ecosystem invites residents in the world’s poorest regions to collect and exchange plastic for digital tokens. Through blockchain, they can use the tokens in exchange for access to necessities, healthcare coverage, school tuition, local currency, and more, reducing the risk of loss or theft.

According to Plastic Bank, residents can substantially boost their incomes through this system, as they receive the spot market rate plus premium for the plastic they collect. Explains the SC Johnson spokesperson, once the Social Plastic is collected, the company purchases it at a premium over other post-consumer recycled plastics. It is then recycled through a number of SC Johnson suppliers and is manufactured into the Mr Muscle and Windex trigger bottles.

Notes the spokesperson, there are some imperfections in the PET bottle, which come with the use of any PCR plastic, but the plastic is ground, washed, and re-pelletized to ensure its strength and quality.

Says Plastic Bank founder and CEO David Katz, “Together with SC Johnson, we now have the ability to help close the loop and advance a circular economy while developing infrastructure in the areas where it is needed the most. We are eager to expand exponentially and maximize our efforts in cleaning the environment, prohibiting waste from entering the ocean, and alleviating poverty simultaneously. There is no better partner than Fisk [SC Johnson Chairman and CEO Fisk Johnson] and SC Johnson—other CEOs should take note.”

In the U.S. and Canada, the three Windex formulas in the Social Plastic bottle are sold in a number of retailers, such as Target and Walmart, as well as on Amazon. In the U.K. and Ireland, the Mr Muscle bottle is available from homewares and household goods retailer Wilko and through Amazon. Thus far, says the SC Johnson spokesperson, the company has collected 4 million kg of ocean plastics through its partnership with Plastic Bank. 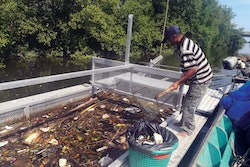 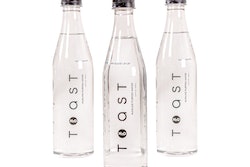 Label-less Bottle a Cinch to Recycle 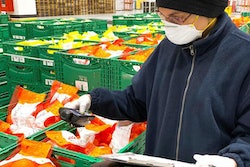