New cartoning technology powered by an advanced electric drives and control solution is paving the way for growth at Milwaukee-based Kangaroo Brands, a rising maker of pita bread products. 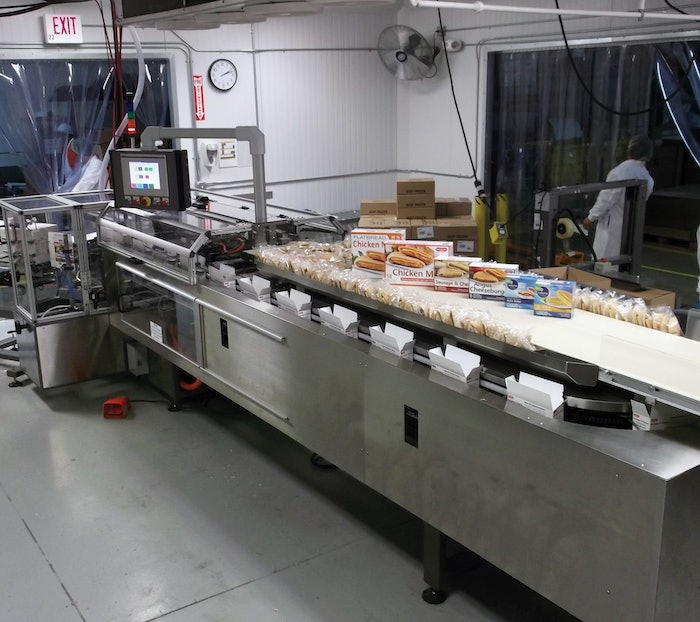 Carton varieties. The cartoner handles a wide variety of carton sizes, so ease of changeover was a must.

Kangaroo Brands, Inc. is a fast-growing maker of ready-to-serve pita bread and sandwiches, sold through a wide range of retailers and to national warehouse store chains. As sales have continued to increase, greater productivity and flexibility were clearly required. The Milwaukee-based firm got what it needed in a compact, servo-driven Veronica vertical cartoner machine from Ultra Packaging, Inc., which is powered by a complete electric drives and control solution from company Bosch Rexroth Corporation.

When Kangaroo initially introduced its pita pocket sandwiches, the company used a manual cartoning process. However, once Kangaroo began supplying large retailers such as Walmart and the like, its needs changed. Not only have sales risen steadily, so has the variety of SKUs.

“In serving the larger retailers and club stores, we had to begin packaging our pita sandwiches in different count cartons,” said Justin Rice, Kangaroo plant manager. Now used are four different carton sizes: a four-count, a six-count, a 12-count, and a 14-count carton.

With these changes in production, Kangaroo recognized that investing in end-of-line automated cartoning, with the ability to quickly and efficiently change carton sizes, was essential. In addition, the new cartoning system needed to be implemented while keeping the process running in a physically limited space.

To meet these requirements, Rice contacted Ultra Packaging about its Veronica vertical cartoner with Rexroth electric drives and controls. “We have a long-standing relationship with Ultra Packaging and have purchased other machines from them, so when we decided to automate cartoning we chose to consider their Veronica machine,” says Rice.

Kangaroo already had two automated flow wrappers processing its pita sandwiches, so automated cartoning made sense. The Veronica VHL is a seven-axis cartoner designed by Ultra for operations that require flexibility (multiple carton sizes), quick changeover (typically 10-15 minutes), and user-friendly servo technology. It’s a fast and reliable machine for erecting cartons from flat paperboard blanks and precisely transporting and synchronizing the loading, closing, and gluing of the cartons.

Versatile and efficient
The Veronica’s versatility and efficient performance is built around its advanced Bosch Rexroth drives and control platform. The Rexroth IndraDrive Mi integrated drive/motor system drives each machine axis. Each servo unit consists of a Rexroth motor with the drive electronics integrated into the motor housing, which allows the units to be located out on the machine rather than inside the control cabinet. The motor and drive combination also offers greater design flexibility, with multi-protocol communications hardware that supports PROFINET IO, EtherNet/IP, EtherCat, and Sercos III.

The integrated motors and drives save space and cooling requirements in the cabinet and reduce the machine’s component cost: a single cable for power and communication runs from the power supply in the cabinet, with each IndraDrive Mi daisy-chained to the next. This brings significant savings.

“By using the IndraDrive Mi motor/drives, we reduced our linkages and other machine components by 60 percent compared to prior models,” said Bob Stockus, Ultra Packaging vice president. “Our cabling cost has gone down about 40 percent and our time for field wiring alone has dropped 40 percent.”

At the heart of the Veronica cartoner lies the Rexroth XLC motion logic controller, integrating synchronized motion on each axis as well as logic programming. The IndraMotion XLC is an advanced machine automation software platform and features a wide range of open interfaces, including Sercos III, PROFIBUS, PROFINET, and EtherNet/IP. The Veronica machine uses Sercos III for its communication bus, ensuring tight, efficient servo synchronization and control of multiple machine functions.

During operation, wrapped sandwiches are transported from the two upstream flow wrapping machines to the cartoning machine via an inclined conveyor specially created to lift the products to the level of the Veronica’s transport belt.

Speed and simplicity
According to Rice, one of the key reasons Kangaroo chose the Veronica was the speed and simplicity of changeovers to different carton sizes. “During a typical work week, we may perform 16 to 18 carton changeovers for various customers,” Rice said. “It typically only takes 10 to 15 minutes to do, and we’ve trained four different associates to use the touchscreen human machine interface (HMI) to do the changeover.”

The HMI consists of a Rexroth VCP 35 terminal with a 10-in color touchscreen, which provides complete machine operator control. Rexroth’s XLC L25 Control is the state-of-the-art hardware platform that is programmed with the IndraWorks software suite. The IndraWorks software Is a unified engineering framework that provides the tools and environment for project planning, programming, commissioning and diagnostics.

The XLC L25 is a cost-effective unit that utilizes the latest IEC 61131-C compliant Rexroth IndraLogic 2G kernel and can support up to 16 real and/or virtual machine axes. This enables it to control both the Veronica and the external conveyor feeding the machine. The modular Rexroth IndraDrive Mi configuration also allows for a new axis of motion to be added to the machine with minimal effort, if Kangaroo needs to do so in the future.

“The IndraWorks software is written to tie these multiple axes together, which results in the machine being easy to adjust, easy to monitor, and easy to change over to different carton sizes,” Ultra Packaging’s Stockus said.

Another reason Kangaroo chose the Veronica was its compact footprint—this was important, since the available space at the plant where the machine was to be located was limited. Originally, wrapped sandwiches were conveyed to the outside wall of the room for cartoning on two semi-automatic systems. Now the primary packages flow into one centrally located incline conveyor, which feeds the Veronica. Ultra Packaging was instrumental in helping engineer this conveyor to lift the sandwiches up to the Veronica for cartoning and also helped integrate it into the Veronica’s controls platform. In addition, the IndraDrive Mi technology helped keep the Veronica’s footprint compact because the drive components are integrated into the individual Rexroth servo motors. Thus, the size of the control cabinet is reduced compared to comparable machines.

“It was a seamless transition,” Rice says. “The layout of the machine fit the production floor exactly as we needed it to.”

Automated cartoning has allowed Kangaroo to greatly increase output. Throughput rates are smooth at about 240 sandwiches/min, enabling comfortable production of a variety of carton sizes. “And if Kangaroo needs to increase throughput in its cartoning processes, the Veronica has the capacity,” Stockus says. “It leaves a lot of room for future growth.”

Kangaroo is also pleased that this investment in automation has generated other savings. According to Rice, losses in cartoning material formerly caused by malfunctioning semiautomatic equipment have been greatly reduced. This has brought a savings of about $20,000 annually. Also gained, says Rice, is a labor cost savings of about $130,000 annually now that operators are not involved in erecting cartons. These operators, says Rice, have now been reassigned to other locations in the plant.

“This automation solution has been performing at or above our expectations and production targets are consistently met,” says Rice. “It’s an effective approach to meet the requirements of our quickly changing production environment.”