Two robots perform the bagging and palletizing of food-grade sodium phosphate in a compact, highly flexible packaging operation at ICL.

The design, manufacture, and integration of the complete compact robotic packaging-palletizing system are provided by Taylor Products Div. of Magnum Systems (www.magnumsystems.com). The system runs the bag handling, filling, and palletizing operations. It’s part of a major expansion that includes processing operations mounted directly above the bag fillers; these comprise main-supply and infeed hoppers, along with milling and sizing equipment. The expansion is expected to provide a three-year payback.

“From our standpoint, it’s much more than a packaging system,” offers ICL engineering manager Bret Graham. “We’ve basically installed an entirely new process, of which the packaging system is a central part.”

The processing and packaging systems are seamlessly integrated. Done from a food safety standpoint, enclosed, integrated pneumatic product handling means that there’s virtually no product waste, says Graham. That’s apparent in the cleanliness of the operation, which makes it difficult to believe that a powdered product is packaged there at all.

The new, 60-ft-long line has been in operation since early 2009. It runs 24 hours per day five days a week, packing multiple grades of SAPP into 50-lb multiwall paper bags. On occasion, the line packs 55-lb preprinted bags for export markets.

The four-layer, valved bags have an inner lining of high-density polyethylene as a moisture barrier and a sealant. The bleached white bags are flexo-printed in two colors.

The robots are the tactical part of a strategy to align ICL’s manufacturing sites with customer locations, according to Graham.

This is also the first time robots have been used at the facility, says Graham, who has wanted to use robots for some time.

“Visiting other installations and talking to people led us to believe that the robots were the right way to go,” says Graham, “and so far, I would agree—the robots appear to be the right choice for what we wanted to do.”

He likes that the robots permit different bag sizes and palletizing patterns to be run and that they require only 25% to 30% of the floor space of traditional systems. “Compared with hard automation, the robots are a simpler system that has the flexibility to be reprogrammed should our requirements change,” explains Graham. “And they are amazingly precise.”

The line is designed to be run by one person, though currently two operators are present as part of the training. All told, nine plant operators have been fully trained to run the system. “The operators quickly embraced the robots,” Graham points out.

The line can be run with one or both of its two filling spouts operating at a rate of around 2 bags/min/spout.

Because of separate processing systems, different products can be readied to run, though they cannot be packaged simultaneously. It’s an instance where low rates for the sake of consistency and flexibility trump high output.

“It’s set up with a lot of flexibility,” says Graham. “Much of the time we run one spout at a time because we can package different products, and we just alternate back and forth between product changeovers. However, there is a fair amount of time where we will have the same product in both feed hoppers and run both spouts packaging a single product.”

The day of our visit, one spout was operating in anticipation of an upcoming changeover to a different product on the other spout.

Bags are supplied to the Taylor Products’ Model A twin-spout air-packer system by a six-axis Fanuc (www.fanucrobotics.com) Model M-16iB/20 robot. It picks the flat bags one at a time from a static supply positioned in a bank of compartments, opens them, and places them over the appropriate filler spout. The magazine was selected for simplicity’s sake, Graham says: “There are no motorized parts versus active bag infeed conveyors.”

Situated at a 90-deg angle and positioned about 8 ft from the filling spouts, each of the magazine’s eight compartments holds a supply of up to 15 bags. The bags are inserted by the operator in the side opposite the robot, which is housed within interlocked fencing for safety reasons. There is similar fencing around the palletizing robot.

Just ahead of bagging, the product flows from a feed hopper through a Safeline metal detector from Mettler-Toledo Safeline Inc. (www.mt.com/safelineus) mounted at the filler spout. This positioning provides several advantages over bagged product inspection, according to Graham:

1. Much higher resolution—three times higher, he says—for improved metal detection, providing better security for customers.
2. There is no opportunity for contamination between inspection and the packaging of the product. If a contaminant is detected, the line automatically shuts down.

Each packer is equipped with ultrasonic sealing. The 1-in.-wide seal along the bag’s top “ensures a positive seal against contamination and maintains integrity,” says Graham. After sealing, the filled bag is released to the main conveyor where, about 10-ft downstream, it goes over what Graham calls a “bag flattening” conveyor section that’s provided by Taylor Products as part of the installation. Rather than using top-and-bottom belts to flatten the bag through squeezing, a powered section uses square rollers to bounce the bag and distribute the product as it is conveyed. “It works very well,” says Graham.

Next, the bag is printed with lot number and date of manufacture by a Diagraph (www.diagraph.com) Model J3000 ink-jet printer. “It performs very well and has been trouble-free,” says Graham.

The bags are then conveyed across a Taylor Products-designed checkweigher and onto a rollered conveyor for pickup by the palletizing robot.

The palletizing robot from Taylor Products is a Fanuc Model M-410iB four-axis robot. “Fanuc offers industry-standard systems that have less complexity than others,” observes Graham.

The robot’s lengthy steel “fingers” on its end effector function like a large claw to grab around and under the bag, between the rollers underneath, and safely enclose the bag until it is released on the pallet.

For space savings, the pallet conveyor is positioned at a right angle to the bag conveyor.

The pallets are loaded seven bags per layer, six high. Full pallets are conveyed to the exit where they can be picked up by forklift and transported to a remote stretch wrapper for subsequent transportation to an off-site warehouse.

Off-weight bags are placed by the robot onto a separate pallet.

Even though the line’s footprint is compact, it’s an open design. “We have lots of open space that works well for how we handle materials and for traffic patterns,” Graham says.

ICL took on additional expenses to improve operator safety. For one thing, the air-packer stations are positioned farther apart than is considered standard to allow for ease of maintenance. “Personnel don’t have to be contortionists,” says Graham. Additionally, the pneumatic portion of the equipment was isolated in a separate room to dramatically lower noise and dust levels.

“It was well worth it,” says Graham. “They learned how to reprogram and troubleshoot the system.”

For Graham, the experience with Taylor Products was a key ingredient to the line’s success from startup through production six months later.

“Taylor Products is fantastic to work with and located only 132 miles away,” concludes Graham, who had considered two other vendors for the project. “It offered a clean, simple, straightforward design. I am absolutely happy with the robotic systems.” 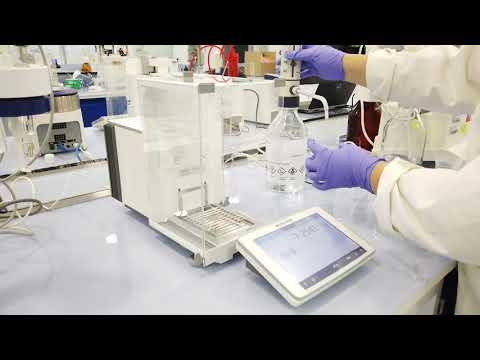