A portable bottling line housed in a 20’x8’x8-1/2’ container is quenching the troops and personnel in Kuwait City, Kuwait. 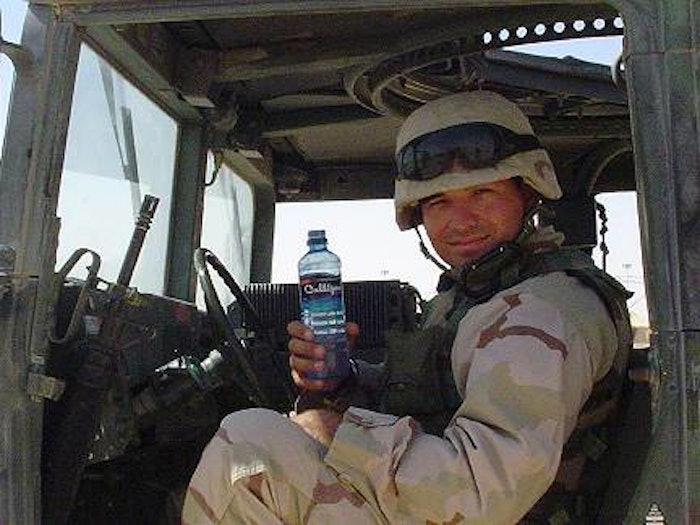 Started up in fall 2003, the 25 bpm self-contained line provides 1.5-L bottled water on-demand for the Army & Air Force Exchange Service (AAFES) troops and support personnel, according to AAFES Food and Theatre program manager Tom Wilson. The portable operation can be moved as needed.

“It’s like a U.S. water bottling plant that just happens to be located outside the U.S.,” says Wilson. The line operators are International Bottled Water Assn. trained civilians, Wilson points out.

The operation comprises two cargo containers, one from

Culligan Intl., United Kingdom, containing a reverse-osmosis water purification system piped to the second container. The second is a HEPA filtered, Class 10ꯠ cleanroom that houses the bottling line. The straight-line bottling operation was assembled by Filler Specialties using its Model GWFS-63 filler-capper, a six-station volumetric filler and three-station capper that fills the bottles and applies the 28-mm screw cap. Ahead of the filler-capper is an Auto Labe Model 110 labeler with a 4’’ wrap station and infeed metering device that applies a pressure-sensitive label printed with the Culligan label. After labeling, the bottles go through a rinser.

Bottles are hand-fed onto a 3’’-wide conveyor that leads inside. Filled bottles exit the cargo container and are hand-packed into boxes that are sealed on a semi-automatic taper. Boxes are then manually palletized.

“The line was intentionally made to be simple,” Wilson says. “There’s not a lot of maintenance available over there. So far it’s worked slick.”

Nightly, the system is secured against bioterrorism. “Since it’s containerized, we can lock and seal everything up including using steel plates to seal openings,” says Wilson.

Forthcoming is a 1/2-L size and, perhaps, flavored waters, according to Wilson. Since it can be downed at once, the smaller size would permit the water from getting warm too quickly, “which is a big deal over there,” Wilson says. As for the flavors, “troops must drink a lot of water and they get burned out drinking just water.

“The concept is a good one,” adds Wilson, “and we are considering a second, duplicate system.”