What did Avail Medical get for its $180ꯠ investment—comprising all costs including shipping—in its most recent machine improvements for a vertical form/fill/seal machine? In short, plenty. 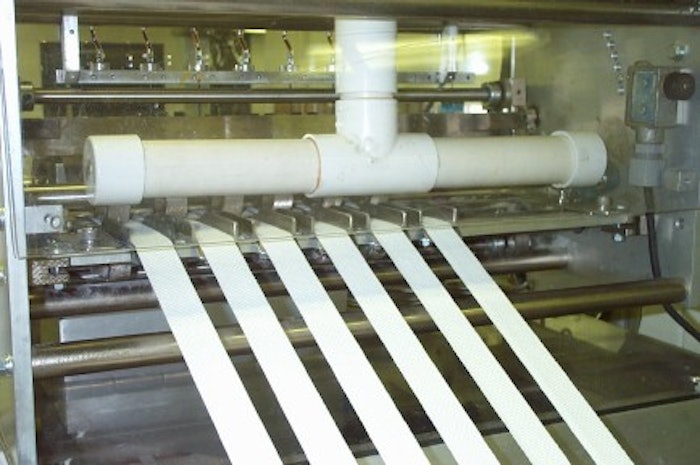 Lint is removed from the six-across pad material as it passes beneath a horizontal vacuum tube just before it is cut, folded and

The latest upgrades were made in 2001 by Cartpac (Carol Stream, IL) to the 1985 vintage machine, which had previously been rebuilt by Cartpac in 1998.

The newly refurbished machine, housed within an isolated area at Avail’s Dallas, TX, plant, has the following new Cartpac-added features:

Other component updates include two more servo motors and drives from MTS Automation (New Ulm, MN)--added to two that had been installed in '98--along with eight Tri-Tronics (Tampa, FL) optical sensors. Two are Smarteye® Mark II sensors, one used for main registration of the laminate web, the other used for registration that prompts the three thermal-transfer printers into action. Six Opti-Eye® fiber optic sensors, one per lane, are used to confirm that a pad has been inserted into the packet. Bad packets are tracked and rejected.

In addition to these Cartpac engineered additions, Quay designed a venturi tube that uses suction to remove the edge scrap from the pad material and from the laminate film. It pulls the lengthy strands through tubing and into a filter-equipped barrel.